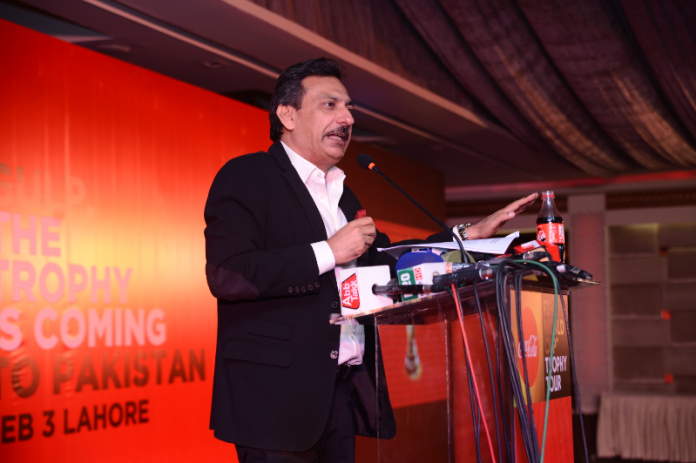 LAHORE: The Coca-Cola Company is set to create history by bringing the FIFA Football World Cup to Pakistan for the very first time this year. The fourth FIFA World Cup™ Trophy Tour by Coca-Cola will arrive in Lahore on February 03, 2018, giving Pakistani fans the chance of a lifetime to experience football’s most coveted prize.

On this momentous occasion, we spoke with Coca-Cola Pakistan and Afghanistan General Manager Rizwan U Khan to understand why and exactly how Coca-Cola is supporting football in the country.

Q1. Why is Coca-Cola partnering with FIFA and how old is this partnership?

RUK: We believe events such as the FIFA World Cup Trophy Tour by Coca-Cola can serve as a force for good that unites people through a common interest in football. Coca-Cola has always believed the capacity of sporting events to inspire millions of people and hence has supported and sponsored the Olympic Games, the UEFA EURO Championship European Cup, Wimbledon and the FIFA World Cup™. The Coca-Cola Company is one of the longest-standing corporate partners of FIFA. The formal partnership began in 1976 and our sponsorships highlight our commitment to making a positive difference in all the communities we serve.

Q2. Tell us a little more about this Trophy Tour? And how is it important for Pakistan to be part of this tour?

RUK: In the world of sports, perhaps no symbol is better recognised than the FIFA World Cup Trophy. It represents a sport which is the most played sport across the world, transcending geographical, ethnic and cultural borders. The trophy is thus globally acknowledged as a unifying force, bringing the people of the world together in healthy competition. Coca-Cola Pakistan is proud that for the first time in World Cup Football history, we are able to bring the FIFA World Cup to Pakistan on its Global Tour.

Q3. How long is the Trophy in Pakistan for and can fans see it?

RUK: A group of Pakistani nationals, including representatives from media, Coca-Cola and Pakistani footballers, will fly to Chiang Mai, Thailand to accompany the FIFA World Cup™ Trophy on its special flight to Lahore, Pakistan on February 03. The trophy will then be taken to the Garrison Club where media people will be invited to a press conference. Later in the day, the trophy will be moved for fans to view it at the CokeFest and experience the FIFA excitement. I wish that the Trophy could have stayed in Pakistan longer and that it could have been taken to other cities as well. But this was not possible as the Trophy has to visit some 50 countries around the world.

Q4. We all know Pakistan’s love for cricket. How big do you think football is in the country?

RUK: Although football does not receive the level of attention that it deserves, it is not only quite a popular game in Pakistan, but its popularity has also been increasing exponentially over the years. Bringing the Trophy to Pakistan is our first tribute to football players and fans across the country, and I am sure as the news of the Trophy’s visit to Pakistan is spread far and wide, it will support the further growth of the game in our country.

Coca-Cola has always been the pioneer in taking initiatives that resonate deeply with the youth and support their development. Be it music, education, environment or sport, Coca-Cola firmly believes in the energy of the younger generation and in supporting their aspirations. Just like back in April 2008, Coca-Cola had brought the Olympic Torch to Pakistan for the very first time, before the Summer Olympics held that year in Beijing, China.

Q5. Why does Coca-Cola sponsor sporting events, and how does this promote youth development?

RUK: We care about people’s well-being and want to make a positive difference in their lives, both physically and emotionally. We are one of the world’s largest sports sponsors with our sponsorships ranging from top athletes to grassroots sports movements. We are also the longest, continuous standing partner of one of the largest sports’ platforms in the world, the Olympic Games – proof of our commitment to using the power of our brands to encourage an active lifestyle.

Pakistan’s youth bulge is a well-known fact; it is also unfortunate that the country lacks the infrastructure and official support for sports development. Working to reinvigorate passion in sports and other extracurricular activities will not only benefit the youth, it will also solve a lot of problems that Pakistan is facing.

Football is one of the most popular sports in Pakistan and along with promoting an active lifestyle. For Pakistani football devotees, visit of the FIFA World Cup™ Trophy is just the beginning. Moving forward, Coca-Cola Pakistan will undertake a series of initiatives across the country for the development of the sport and as encouragement for the players. We will talk more about these initiatives in the coming months.

Other than sports, Coca-Cola has been supporting youth development in Pakistan in many ways including promoting music through Coke Studio, investing in education through partnerships with LUMS, TCF and CARE Foundation, and encouraging corporate philanthropy through our National Volunteer Program to name just a few.