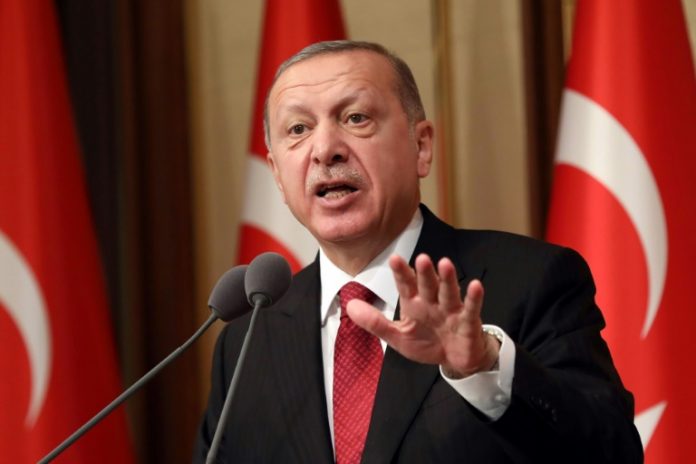 ISTANBUL: Turkey doubled tariffs on some US imports including alcohol, cars and tobacco on Wednesday in retaliation for US moves, but the lira rallied further after the central bank’s liquidity moves had the effect of supporting the currency.

Ankara acted amid increased tension between the two NATO allies over Turkey’s detention of a Christian American pastor and other diplomatic issues, which have helped send the lira tumbling to record lows against the dollar.

The currency has lost nearly 40 per cent against the dollar this year, driven by worries over President Tayyip Erdogan’s growing influence on the economy and his repeated calls for lower interest rates despite high inflation.

It rebounded some 6 per cent on Wednesday, briefly strengthening to less than 6.0 against the dollar, after the central bank squeezed lira liquidity in the market, effectively pushing up rates and supporting the currency.

“They are squeezing lira liquidity out of the system now and pushing interest rates higher,” said Cristian Maggio, head of emerging markets strategy at TD Securities.

“Rates have gone up by 10 per cent … The central bank has not done this through a change in the benchmark rates, but they are squeezing liquidity, so the result is the same,” Maggio said.

The lira firmed as far as 5.75 against the dollar on Wednesday and stood at 6.1320 at 1243 GMT in a move initially triggered by the Turkish court decision on the Greek soldiers who faced espionage charges.

A treasury desk trader at one bank said this showed relations with the EU could recover “while tense relations continue with the USA.”

The lira was also helped by a step from the banking watchdog BDDK, cutting the limit for Turkish banks’ forex swap, spot and forward transactions with foreign banks to 25 per cent of a bank’s equity.

The lira had rebounded about 8 per cent on Tuesday on news of a planned conference call on Thursday in which the finance minister will seek to reassure international investors. A Finance Ministry official said so far 3,000 people have signed up for the call.

Turkey’s banking sector remained strong and liquid and the measures taken to support the market have started to show impact, Turkey’s Akbank chief executive said and added there were was no withdrawal of deposits.

A decree signed by Erdogan doubled Turkish tariffs on passenger cars to 120 per cent, on alcoholic drinks to 140 per cent and on leaf tobacco to 60 per cent. Tariffs were also doubled on goods such as cosmetics, rice and coal.

The duties were raised in response to the US administration’s “deliberate attacks on our economy,” Vice President Fuat Oktay wrote on Twitter. Last Friday, US President Donald Trump said he had authorised higher tariffs on aluminium and steel imports from Turkey.

The United States was the fourth largest source of imports to Turkey last year, accounting for $12 billion of imports, according to IMF statistics. Turkey’s exports to the United States last year amounted to $8.7 billion, making it Turkey’s fifth-largest export market.

NATO allies the United States and Turkey have been at loggerheads over a wide range of topics including diverging interests in Syria, Ankara’s ambition to buy Russian defence systems and Andrew Brunson, a pastor on trial in Turkey for terrorism charges.

Erdogan has said Turkey is the target of an economic war and has made repeated calls for Turks to sell their dollars and euros to shore up the currency. On Tuesday, he said Turkey would boycott US electronic products.