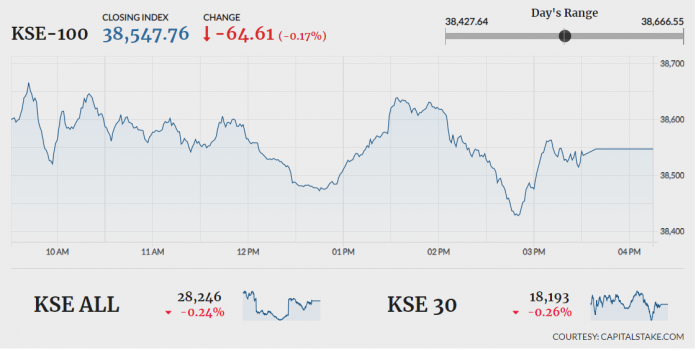 KARACHI: Investors of the Pakistan Stock Exchange (PSX) witnessed a volatile session on Wednesday, as the indices swung in both directions amid low volumes. Foreign investors offloaded shares worth $0.156 million on Tuesday.

Trading volumes improved from 70.81 million in the preceding session to 83.08 million. Pakistan Telecommunication Company Limited (PTC -3.01pc) led the volume chart with a volume of 11.18 million shares, followed by The Bank of Punjab (BOP -0.15pc) and Worldcall Telecom (WTL -6.25pc), with 7.37 million and 6.46 million shares respectively.

As per news reports, Pakistan has started generating power from Thar coal. The said project is expected to cut oil imports by up to $1.6 billion per annum.

Fauji Fertilizer Company Limited (FFC +0.27pc) also closed with slight gains. As per news reports, the company has increased urea prices by Rs80 per bag. The hike in price was due to a decrease in the inventory levels and an increase in demand ahead of the Kharif sowing season.