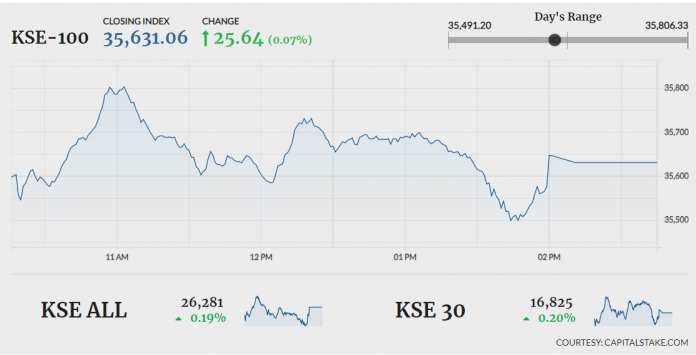 KARACHI: After oscillating in both directions, the Pakistan Stock Exchange (PSX) managed to close a volatile session in green. Foreign investors closed the previous session as net buyers with a net inflow of $4.47 million.

The market volumes declined from 71.42 million in the preceding session to 65.36 million. K-Electric Limited (KEL -3.26pc), The Bank of Punjab (BOP +0.42pc) and Sui Northern Gas Pipeline Limited (SNGP -2.15pc) were the top traded scripts of the day. The stocks had exchanged 10.19 million shares, 5.33 million shares and 3.0 million shares respectively.

In a meeting held to discuss the developments and reforms in the energy sector, Prime Minister Imran Khan was informed that the circular debt, which had surged by Rs450 billion during 2017-18, would be eliminated by the end of next year.

The PM was further informed that a 25-year plan to cope with the supply and demand for power has been formulated in addition to a fresh policy for power production through alternate energy resources.