US-China trade talks: where they are and what’s at stake 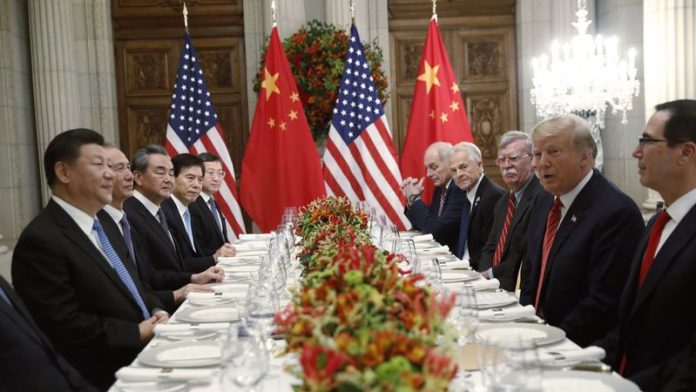 US President Donald Trump and Chinese President Xi Jinping are due to meet on Saturday at the Group of 20 (G20) summit in Japan to try to resurrect a deal to end a costly trade war.

Negotiations between trade teams from the world’s two largest economies broke down in May when Washington accused Beijing of reneging on commitments to change its laws to enact economic reforms.

Here is a look at the state of talks, the key issues and their implications:

After over a month with little contact, it’s unlikely the two sides will make much headway on a trade deal at the summit.

One possible outcome would be for Xi and Trump to agree to delay further escalation of the dispute while talks continue at the negotiator level. That would be a repeat of what was agreed when the two presidents last met at the G20 in Buenos Aires in 2018.

US officials have repeatedly said they want to avoid drawn-out negotiations with China, however.

THE STATE OF TALKS

Trump did not agree to any preconditions for his high-stakes meeting with the Chinese president and is maintaining his threat to impose new tariffs on Chinese goods, White House economic adviser Larry Kudlow said on Thursday.

Neither side has signaled it would shift from positions that led to the impasse last month, when Beijing revised a draft of the trade deal, removing references to changes in Chinese law.

US officials have said that the resumption of talks would depend on China returning to the original text.

Lighthizer told a congressional hearing this month that China also backtracked on commitments on digital trade issues, including US access to cloud computing services in China.

China has downplayed its changes, and also said US demands violate its sovereignty. Foreign ministry spokesman Geng Shuang said on Friday he hoped the US side could meet China halfway.

Before the talks broke down, US officials had said the two sides made progress on intellectual property protection and that China made proposals on a range of issues that went further than Beijing had gone before.

For example, China for the first time discussed forced technology transfer as a widespread problem. China had previously refused to acknowledge that such coercion had existed to the extent alleged by the United States. US companies complain they are pressured to hand over their competitive secrets as a condition for doing business in China.

US officials also said they had made progress on cyber theft, services, currency, agriculture and non-tariff barriers to trade.

China had offered to bring subsidies in line with World Trade Organization guidelines but had not detailed how it would do that.

For its part, the United States had watered down demands China end industrial subsidies, which would require a change in China’s state-driven economic model.

US officials have said China offered to make purchases of over $1 trillion worth of goods over the next six years, including agricultural and energy products as well as industrial goods. China has said, however, that there is still disagreement between the two sides on the actual purchases.

One of the key sticking points until talks broke down was the timeline for removal of the 25pc tariffs on $250 billion worth of imported goods from China that the Trump administration has already imposed. The United States wanted to keep some tariffs in place to ensure that China met the terms of the deal, but China demanded all tariffs be lifted immediately.

Another contentious issue was the plan for a regular review of China’s compliance, a mechanism that would maintain the perpetual threat of US tariffs.

One of the biggest US concerns is who will dominate future high-technology industries. China is determined to upgrade its industrial base in 10 strategic sectors by 2025, including aerospace, robotics, semiconductors, artificial intelligence and new-energy vehicles.

Washington’s demands for change follow years of steadily rising US trade deficits with China and US complaints that Beijing has systematically obtained American IP and trade secrets through coercion and outright theft.

The USTR says China’s subsidies to state enterprises, including at the provincial and local government levels, have also led to an unsustainable build-up in industrial capacity in China – such as in steel – that has depressed global prices and hurt producers in the US and elsewhere.

US officials argue that China’s massive support for state-owned enterprises makes it hard for US companies to compete on a market-driven basis.

They say they do not have a problem with China moving up the technology ladder, but they do not want it to happen with stolen or unfairly obtained American know-how or in a market in which Chinese firms have an unfair advantage.

PESHAWAR: The Khyber Pakhtunkhwa (KP) government has approved a grant of Rs150 million for the welfare of religious minorities out of which Rs100m would...
Read more
- Advertisment -