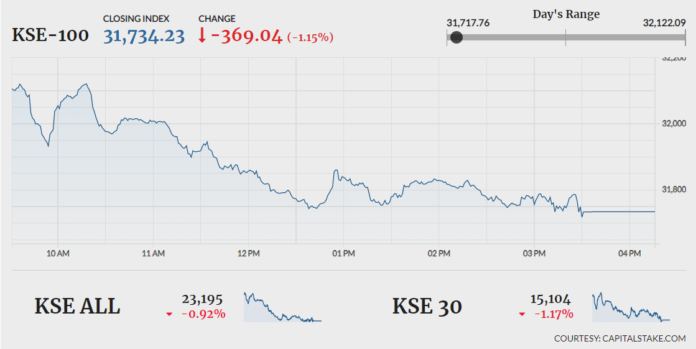 ISLAMABAD: The Pakistan Stock Exchange (PSX) ended the first trading session of the week on a negative note, as the indices bled for the most part of the day amidst low market turnover and lack of triggers.

The earnings season also failed to induce any excitement in the investors who preferred to stay on the sidelines on Monday.

On the market front, Pakistan Oilfields Limited (POL +0.31pc) declared its financial performance for the year ending 30th June 2019. The company declared a final cash dividend of Rs30 in addition to Rs20 already paid. Sales increased by 35pc YoY, while earnings per share appreciated from Rs40.10 in FY18 to Rs59.44 in FY19.

Attock Cement (Pakistan) Limited (ACPL -2.07pc) also released its financial results for the year ending 30th June 2019, along with final cash dividend of Rs4. The company’s revenue rose by 26pc YoY, whereas earnings per share declined from Rs32.02 in the same period last year to Rs15.09.

Lucky Cement Limited (LUCK -1.37pc) posted its financials for FY19, along with a final cash dividend of Rs6.50. Sales increased by 1pc YoY, whereas EPS deteriorated from Rs37.72 in the same period last year to Rs32.44. The company’s cost of sales went up by 11pc which resulted in a decline of 17.5pc in gross profit.