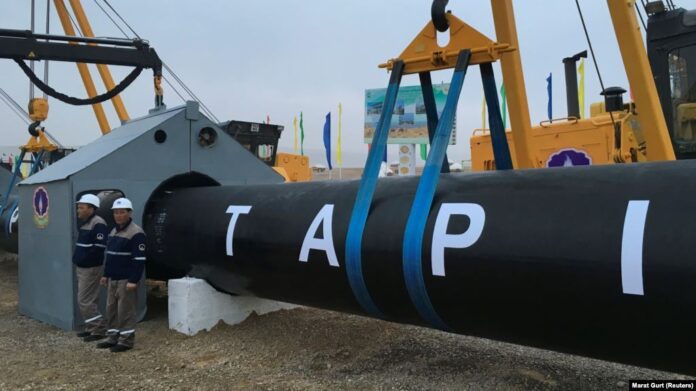 The Ministry of Energy (MoE) has aggressively been pursuing the international gas pipeline projects to meet the energy needs of the country, said a press release issued here Sunday.

The Turkmenistan-Afghanistan-Pakistan-India (TAPI) Gas Pipeline Project and North South Gas Pipeline Project were clear illustrations of such efforts of the Ministry of Energy, the statement said, adding that the TAPI project has achieved substantial progress during the current year.

The ministry said that the heads of terms of the host government agreement have been signed with the TAPI Project Company in order to enable the company to start construction work in Pakistan and the ground breaking ceremony for Pakistan segment of the project is also being planned, which is expected to be held shortly.

The statement further noted that the TAPI Project Company – TAPI Pipeline Company Limited (TPCL) – has established its project office in Dubai and also opened a branch office in Islamabad. “To fund the project activities, the Government of Pakistan is regularly contributing its committed share in the project,” the statement added.

The TPCL is being managed by Turkmenistan being the majority shareholder and consortium leader in the project.

“The assertion appeared in a section of press that Pakistan is being represented in the project company through a foreigner or any financial embezzlement is being committed is absolutely wrong, baseless and concocted,” the statement read.

It said that the project was professionally managed by Turkmenistan in accordance with the terms of the agreements between the four countries.