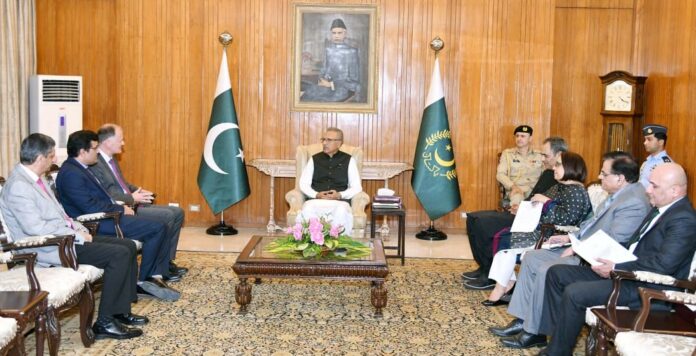 ISLAMABAD: President Dr Arif Alvi on Thursday urged Royal Dutch Shell to invest in renewable resource of energy since the company has achieved major breakthroughs in this sector.

He said this during a meeting with Royal Dutch Shell South Asia (Government Relations) Vice President James Hall in Islamabad.

The president noted that Shell was one of the oldest multinationals in Pakistan, having a presence in the South Asian region for over a century.

He said that the investment policy of Pakistan has been designed to provide a conducive business environment for the attraction of Foreign Direct Investment (FDI).

Dr Alvi underscored that the country’s investor-friendly investment policy provided no restriction on remitting capital, profits and dividends. “The government welcomes Shell’s interest in new projects and hopes that the company would keep investing in Pakistan to assure its economic development,” he added.

Speaking on the occasion, James Hall informed that Shell has its footprint in Pakistan since its independence in 1947 and has been privileged to play a vital role in the country’s progress.

“Right from the largest natural gas discovery at Sui in 1952 to the launch of the retail visual identity stations in 1995 that changed the face of fuel retailing in Pakistan, Shell has been a dedicated energy partner in the country. We are making a paradigm shift in our strategy by implementing a structured convenience retailing model for our customers across our service station network, which would be another milestone for downstream in the country.”

Hall added, “We are committed to working with the government by sharing insights in energy transition and transitioning to a low-carbon future, thus building a sustainable energy future for Pakistan together.”