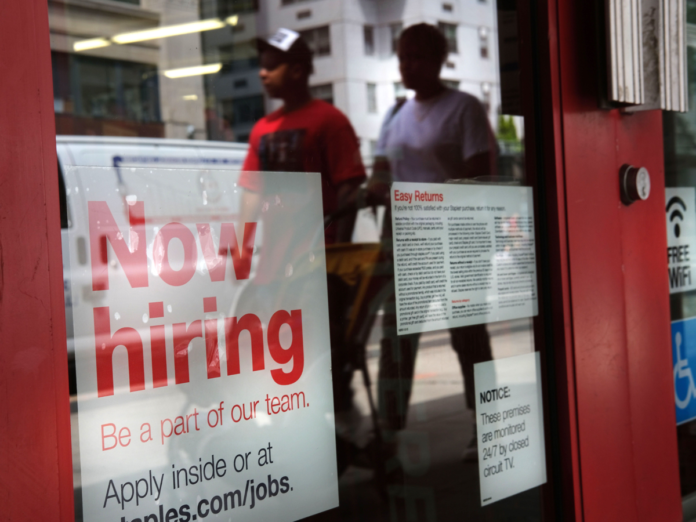 WASHINGTON: US job growth increased by the most in 10 months in November as former striking workers returned to General Motors’ payrolls and the healthcare industry boosted hiring, the strongest sign yet the economy was not in danger of stalling.

The Labor Department’s closely watched monthly employment report on Friday also showed steady wage gains and the unemployment rate falling back to 3.5pc, suggesting consumers will continue to drive the longest economic expansion in history, now in its 11th year.

The report added to other fairly upbeat reports on the trade deficit, housing and orders for big-ticket goods. Together, the improving data validate the Federal Reserve’s decision in October to cut interest rates for the third time this year but signal a pause in the easing cycle that started in July when it reduced borrowing costs for the first time since 2008. (Full Story)

US central bank policymakers are expected to highlight the economy’s resilience when they meet on Dec 10-11, though trade tensions continue to reverberate in the background.

“This was a strong report, with a solid rise in payrolls, another drop in the unemployment rate, and decent growth in hourly earnings,” said Chris Low, chief economist at FHN Financial in New York. “The Fed will see this as clear vindication of their decision to stop cutting rates.”

Nonfarm payrolls increased by 266,000 jobs last month, with manufacturing recouping all the 43,000 positions lost in October, the government’s survey of establishments showed. Employment growth was also boosted by a gain of 60,200 healthcare workers, the most since March.

The largest increase in payrolls since January lifted job growth well above its monthly average of 180,000 this year. Economists polled by Reuters had forecast payrolls rising by 180,000 jobs in November. The economy created 41,000 more jobs in September and October than previously estimated.

The 40-day strike by about 46,000 workers at GM plants in Michigan and Kentucky had restricted employment gains to 156,000 jobs in October. Even discounting the GM-related boost, employment growth exceeded 200,000 jobs last month.

The strong payroll gains suggest the Trump administration’s 17-month trade war with China, which has plunged manufacturing into recession, has not yet spilled over to the broader economy.

The US-China trade tensions have bruised business confidence and undercut capital expenditure. Though Washington and Beijing are working on a “phase one” trade deal, the United States has ratcheted up tensions with other trade partners including Brazil, Argentina and France. President Donald Trump said on Thursday the United States was having meetings and discussions with China “that are going well.”

Economic growth estimates for the fourth quarter are converging around a 1.8pc annualized rate. The economy grew at a 2.1pc pace in the third quarter. Economists estimate the speed at which the economy can grow over a long period without igniting inflation at between 1.7pc and 2.0pc.

US stocks were trading higher while the dollar gained against a basket of currencies. Prices of US Treasuries were lower.