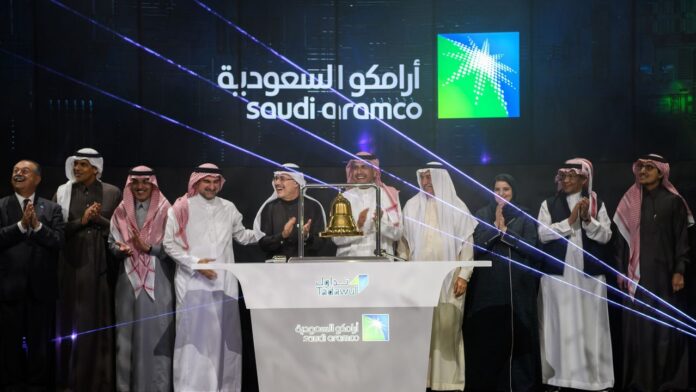 RIYADH/DUBAI: Saudi Aramco hit the $2 trillion target sought by de-facto Saudi leader Crown Prince Mohammed bin Salman on Thursday as its shares racked up a second day of gains, despite some scepticism about the state-owned oil firm’s value.

Aramco’s initial public offering (IPO) is the centrepiece of the Saudi crown prince’s vision for diversifying the kingdom away from its oil dependence by using the $25.6 billion raised to develop other industries.

But that is well below his 2016 plan to raise as much as $100 billion via a blockbuster international and domestic IPO.

Riyadh scaled back its ambitions after overseas investors baulked at the proposed valuation and only 1.5pc of Saudi Arabian Oil Co (Aramco) shares were listed on the Riyadh stock exchange on Wednesday, a tiny free float for such a huge company.

While a 10pc jump in the stock on its debut, the maximum allowed by the Riyadh exchange, was hailed by the Saudi government as a vindication, support was largely from loyal Saudi and Gulf rather than overseas investors.

The IPO was frontpage news in mainstream Saudi media, with headlines such as “Aramco at the top of the world” and “A dream come true”.

But Bernstein analysts put Aramco’s value at around $1.36 trillion, which compares with U.S. energy giant Exxon Mobil’s market capitalization of less than $300 billion.

“Saudi Aramco is the largest, most profitable oil company in the world – but size is not everything,” they wrote, flagging the risk of slow net income growth if oil prices stay flat.

An International Energy Agency (IEA) report pointed to pressure on oil prices, predicting a sharp rise in global inventories despite an agreement by OPEC and its allies to deepen output cuts as well as lower expected production by the US and other non-OPEC countries.

Bernstein said Aramco should trade at a discount rather than a premium to international oil majors, with corporate governance “the key risk” as the Saudi government owns more than 98pc of it.

“For actively managed funds, one of the key considerations – aside from valuation – will be ESG (environmental, social and corporate governance) criteria,” said Tim Love, Investment Director for emerging markets equities at GAM.

Some 15.9 billion riyals worth of Aramco shares were traded by the close, with around 417.7 million shares exchanging hands, Refinitiv data showed. This made up most of the total turnover of the whole Riyadh market which was 18.5 billion riyals.

“Initial price action has validated our thesis that Aramco discounted its IPO price to leave upside on the table and allow regional investors to benefit from the listing of its crown jewel,” Zachary Cefaratti, CEO of Dubai-based Dalma Capital, which invested in the IPO, said in a note on Thursday.

“The average institutional investor received less than 1/6th of the shares they bid for in the IPO, and have had to buy shares on the open market,” Cefaratti said of the Aramco deal, which became the world’s largest, topping the $25 billion 2014 listing of China’s Alibaba.