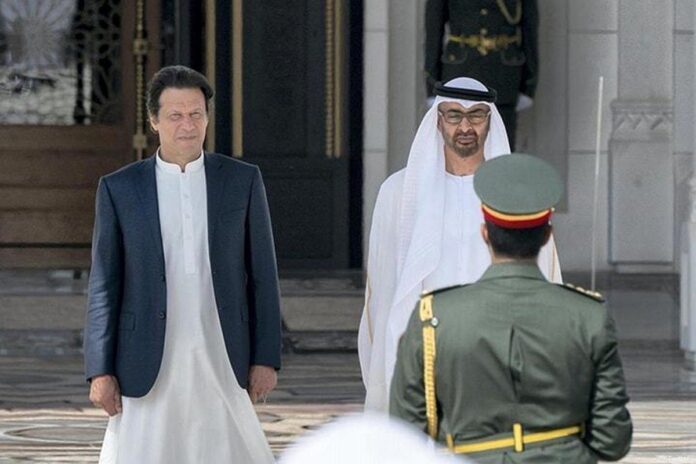 The crown prince arrived at the Nur Khan Airbase earlier in the day where he was received by Prime Minister Imran Khan and various government officials. Setting aside the protocol, the premier himself drove the crown prince to the PM House from the airbase.

During the meeting, both the leaders discussed ways to enhance bilateral relations between the two countries and exchanged views on matters of mutual interest, as well as the regional and global situation.

In a tweet via his official account, Sheikh Mohamed said that he met his “friend Prime Minister Imran Khan” and discussed “regional and international issues of mutual interest as well as ways to enhance bilateral ties”.

On the sidelines of his visit, the crown prince also directed the allocation of US$200 million to support economic projects in Pakistan.

“This initiative aims to encourage innovation in projects and support entrepreneurship, to assist the Pakistani government’s efforts to create a stable and balanced national economy that will help achieve the country’s sustainable development,” reported Emirates News Agency.

“It is also part of the close ties between the United Arab Emirates (UAE) and Pakistan and the keenness of their leaderships to strengthen and develop them, reflecting the development witnessed by their overall relations over the past decades,” the report added.

Earlier, UAE’s Ambassador to Pakistan, Hamad Obaid Alzaabi, while announcing the Islamabad leg of the crown prince’s trip, had that said it would be a daylong official visit for “strengthening the bonds of friendship between the two brotherly countries”.

Reportedly, the crown prince had been in the country for the past few days for houbara bustard hunting.

The crown prince had last visited Pakistan on January 6 in 2019, just weeks after his country offered $3 billion to support Pakistan’s battered economy.

His visit, which is part of growing exchanges between Pakistan and Arab countries, takes place less than a week after Emirati Minister for Tolerance Sheikh Nahyan bin Maba­rak Al-Nahyan met the premier and President Arif Alvi to discuss possibilities of expanding bilateral ties.

The premier’s visit to Riyadh had followed a trip to Bahrain where he was awarded the country’s highest civilian honour.

Pakistan was one of the first countries with whom Prime Minister Mahathir shared his plans for holding the summit when he had met Prime Minister Imran along with President Erdogan on the sidelines of the United Nations General Assembly (UNGA) session in New York in September last year. Later on, PM Imran had formally conveyed his acceptance of the invitation for attending the summit when Malaysian Deputy Foreign Minister Marzuki Bin Haji Yahya had called on him in Islamabad in November.

However, clouds of uncertainty started to loom over Pakistan’s presence at the summit when PM Imran went on a hurried tour to the kingdom on December 15, just three days before the event. A day earlier, COAS Bajwa had visited Abu Dhabi where he called on Crown Prince Sheikh Mohammed bin Zayed bin Sultan Al-Nahyan.

Subsequently, on December 17, the government had formally announced that it would not attend the event “at any level”. In a media talk, Foreign Minister Shah Mehmood Qureshi had confirmed that Saudi Arabia and the UAE were “worried that the event could cause ‘division in Ummah‘ and lead to setting up of an organisation parallel to the existing Organisation of Islamic Cooperation (OIC)”. It merits a mention here that the OIC is under the influence of mega-rich kingdom.