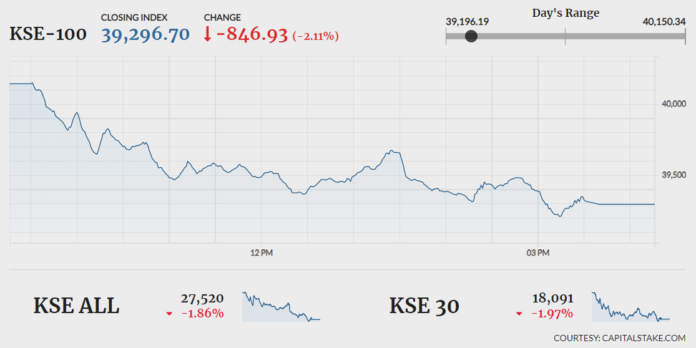 KARACHI: Bears surrounded the Pakistan Stock Exchange (PSX) on Monday, with the benchmark KSE-100 Index slipping below the 40,000-mark for the first time since 3rd December 2019.

On the economic front, Pakistan’s imports contracted by 15.95pc while exports inched up by 2.13pc during the first seven months of FY20. This resulted in the country’s trade deficit narrowing by 28pc.

On a monthly basis, Pakistan’s exports failed to rise in the month of January, recording a decline of 3.19pc. On the other hand, imports reduced by 9.60pc during the month under review, helping the trade deficit contract by 15pc.

In a notification to the exchange, Sazgar Engineering Works Limited (SAZEW -5.76pc) announced the production and sales’ figures of its three-wheelers for the month of January. A total of 1,974 units were produced during the month review, whereas 2,524 units were sold.