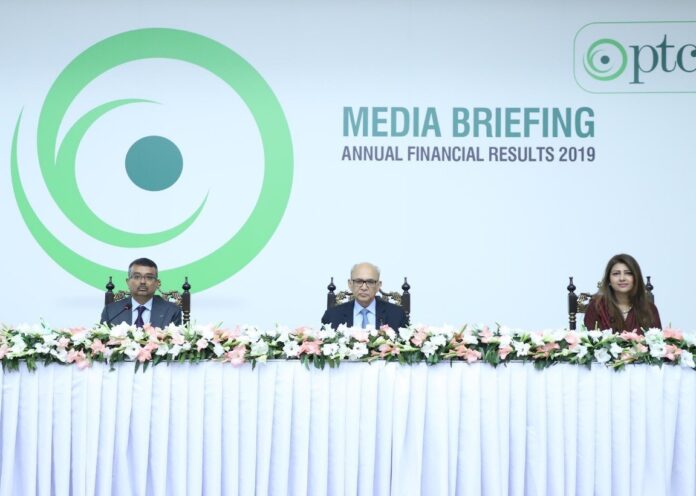 The company’s financial results for the year ended December 31, 2019, were announced by PTCL Group President and CEO Rashid Khan and PTCL Group Chief Financial Officer Nadeem Khan at a media briefing on Tuesday.

PTCL Group (subsidiaries Ufone, UBank and DVCom) has posted operating profit and net profit of Rs6.7bn and Rs2.4bn for the year 2019 respectively, which were Rs9.5bn and Rs5.7bn in 2018 with a decrease of 29pc and 58pc, respectively.

According to the CFO, the PTCL Group’s revenue has shown a year-on-year (YoY) growth of 2.1pc to reach at Rs129.5 billion. All group companies have contributed positively towards this growth.

Ufone continued its acquisition drive in 2019 to cross 23 million subscribers that resulted in an improved market share. U Bank, a microfinance banking subsidiary of PTCL, has shown a significant growth of 48pc in its revenue over the last year as a result of a rapid expansion in its branch network.

The CFO said a decrease in profits was attributable to higher inflation, significant rupee devaluation, an increase in interest rates and hike in power tariffs.

Nadeem said the PTCL’s operating profit for 2019 has decreased by 24pc from the preceding year. “It remained under pressure mainly due to an increase in the operating cost on account of inflation, significant hike in power tariffs and currency devaluation.”

PTCL has posted a net profit after tax of Rs6.3 billion for the year, which is 14.5pc lower than last year.

CEO Rashid Khan told reporters that VIS Credit Rating Company Limited has reaffirmed the entity rating of PTCL of “AAA” (Triple A) and short term rating of “A-1+” (A-one Plus).

He added that the medium to long-term rating of ‘AAA” denotes highest credit quality, with negligible risk factors, being only slightly more than for risk-free debt of the Pakistan’s government.

Rashid further said the short term rating of ‘A-1+’ denotes highest certainty of timely payment; liquidity factors are outstanding and safety is just below risk free short-term obligations of the Government of Pakistan.

“Outlook on the assigned rating is ‘stable’,” the CEO added.

He also said the recent upgrade in its fixed line network infrastructure has enabled PTCL to significantly reduce customer complaints and offer high speed internet packages to its customers.

“In addition to the network upgrade, PTCL has also taken other customer centric initiatives like experience management, implementation of customer-care systems and adoption of related best practices.”

This year, PTCL has been recognized for its customer services at the 14th annual CEM Telecom Awards during the Telecom Global Summit held in London.

PTCL has successfully maintained and expanded its market leadership in the IP bandwidth business.

Wireless revenue for the year has declined on YoY basis due to strong competition by the cellular companies providing wireless data services. There is continued decline in voice revenues due to continued conversion of subscribers to OTT, cellular services and illegal/grey traffic termination, resulting in declining voice traffic volumes.