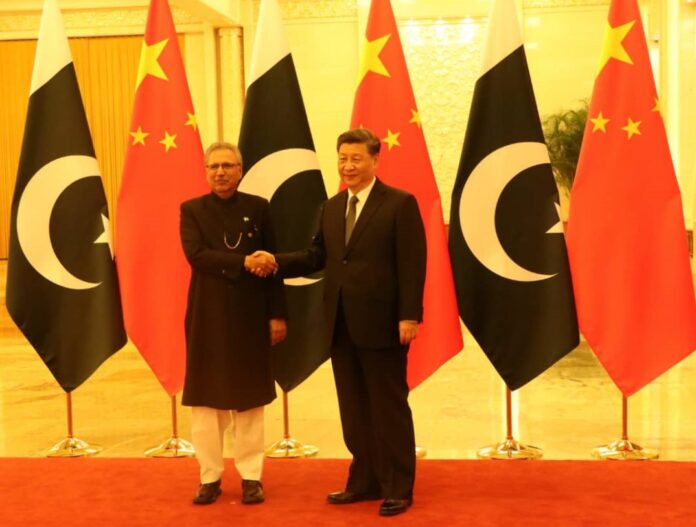 ISLAMABAD: Pakistan and China on Tuesday vowed that the new phase of high-quality development of China- Pakistan Economic Corridor (CPEC) will promote industrialisation and socio-economic development in Pakistan.

The promise was made during President Dr Arif Alvi’s meeting with his Chinese counterpart Xi Jinping during his visit to China. Chinese Premier Li Keqiang and other high ranking officials were also present on the occasion.

Both sides vowed to expand deepening comprehensive strategic cooperation between the two strategic partners as President Alvi visited China on the invitation of his Chinese counterpart.

The visit was undertaken at a time while China and Pakistan along with the rest of the world are engaged in a massive struggle to contain COVID-19. President Alvi praised the relentless efforts undertaken by China for containing and controlling the virus, and was confident that the Chinese people, under the leadership of President Xi, will emerge stronger and victorious in the aftermath of the coronavirus pandemic. The president was accompanied by the foreign minister, minister for planning development and special initiatives, and senior officials.

In a joint declaration, both the sides hoped that the 10th Joint Cooperation Committee (JCC) meeting of CPEC, to be held soon, will further contribute to making CPEC a high-quality demonstration project of the Belt and Road Initiative (BRI).

Both sides stressed that the economic and social impact of CPEC on the region will be substantial and beneficial and hoped that the international community will support such efforts that underpin economic development.

President Alvi also appreciated China’s keen resolve to look after Pakistan’s nationals during this difficult time. The Chinese leadership had assured that it was taking the best possible measures to ensure the safety, health and well-being of Pakistani nationals, including the students.

Xi thanked Alvi for visiting China at a critical time and expressed profound gratitude for Pakistan’s gesture of support and solidarity. The Chinese leadership stressed that since the outbreak, the Chinese Communist Party and government have given top priority to people’s life and health.

On the basis of nation-wide mobilisation, China adopted the most comprehensive, rigorous and thorough measures in little time to contain the virus. The Chinese side emphasised that China has made major progress in the prevention and control of the virus and will win “People’s War” against COVID-19.

Both China and Pakistan underlined that COVID-19 is a common challenge for humanity and all countries should unite and cooperate to overcome this challenge together. President Alvi spoke highly of China’s major progress in battling the epidemic and acknowledged that China’s efforts have won time and set a model for the rest of the world to combat the epidemic, and have made contribution to safeguarding global public health security.

Both sides also exchanged views on the situation in Indian Occupied Kashmir (IOK). The Pakistani delegation briefed the Chinese officials on the latest developments, including its concerns, position, and current urgent issues. The Chinese side underscored that it was paying close attention to the current situation and reiterated that the Kashmir issue was a dispute left from history, and should be properly and peacefully resolved based on the United Nations Security Council (UNSC) resolutions and bilateral agreements.

Both Pakistan and China welcomed the signing of the peace agreement between the United States and Taliban and hoped that the intra-Afghan negotiations would be the next logical step. The two sides agreed that all Afghan parties must seize this historic opportunity and work together constructively to secure durable peace and stability in Afghanistan. The two sides further emphasised the need for the international community to help establish peace as well as extend support for post-conflict reconstruction and economic development in Afghanistan.

Pakistan underscored the need to assist the Afghan government in creating an enabling environment and instituting “pull” factors to enable the Afghan refugees to return to their homeland with dignity and honour. Both sides maintained that they will continue to support a peaceful, stable, united, sovereign, democratic and prosperous Afghanistan, at peace with its neighbors.

During the visit, President Alvi and Chinese President Xi Jinping witnessed the signing of various agreements/MoUs. President Alvi thanked the leadership and people of China for their gracious hospitality and invited the Chinese leadership to visit Pakistan at a mutually convenient time.  Both sides agreed to maintain high-level exchanges and mutual contacts.