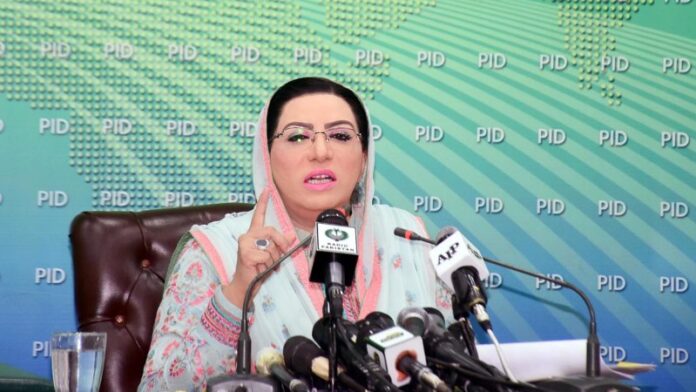 ISLAMABAD/KARACHI: As the first coronavirus patient died in Karachi, the Sindh government on Friday urged citizens to practice self-isolation for three days whereas Special Assistant to Prime Minister on Information and Broadcasting Dr Firdous Ashiq Awan said that that the government is heading towards a two-week lockdown.

Speaking to a local TV channel, Firdous said that the government was in the process of making important decisions pertaining to overseas Pakistanis and international flights. Sindh Chief Minister Murad Ali Shah was also part of the meeting via video link. According to the PM’s aide, the decisions will be announced by the Aviation and National Security Divisions.

Earlier, hours after a 77-year-old coronavirus patient, who was a cancer survivor and had diabetes and hypertension but no travel or contact history, died in Karachi, Sindh CM Murad said that the people should go into complete isolation for three days as it is important for them to stay inside for their personal safety and the safety of others.

Meanwhile, the Balochistan government also imposed a partial lockdown for 21 days to prevent the spread of the virus as the cases increased to 81.

Separately, Prime Minister Imran Khan also urged the nation to adopt social distancing as a precautionary measure against the threat of coronavirus pandemic and said that Centre might consider a nationwide lockdown if things get out of hand.

Talking to senior journalists in the federal capital, he said that it is very important that those who show symptoms of coronavirus must go into self-quarantine. He added that people should avoid social gatherings for the next two months.

“We can manage the outbreak. There is a difference of opinion, but some doctors say that the type of heat Pakistan experiences, that makes the virus lose its effectiveness to spread,” he said.

The prime minister said that the situation is being monitored and tracked on a daily basis and Pakistan is learning from the experience of various countries, especially China, to tackle this menace.

He said that the government is fully alert to the threat and it has been decided that all federal ministers will be available in Islamabad during the crisis and nobody would go on leave. He also said that he will update the people about the coronavirus situation twice a week. He added that no information will be withheld from the people so that prompt action can be taken.

Dispelling the negative impression created by some media channels on the steps taken by the federal government in the wake of coronavirus outbreak, the prime minister said that the government was in constant contact with the Chinese government since the first case of coronavirus emerged in the country. “When cases were traced in Iran, we also started communicating with Tehran regarding the situation,” he added.

He also said that Special Assistant on Health Dr Zafar Mirza visited Taftan to witness the situation first hand and as a result, a lot of measures were adopted for better screening of patients in collaboration with the army and civilian authorities.

He further said that it is not right to blame anyone during this difficult situation.

Imran said that if the cases rise in Pakistan, four to five per cent may need hospitalisation, which will put an additional strain on the available medical resources. He said that even in developed countries like Italy, the situation is becoming critical due to the shortage of medical supplies.

Talking about the role of media in this situation, he said that sensationalism could lead to panic and might make the situation worse. He referred to the example of panic in some Western countries where the people rushed towards grocery stores and emptied shelves.

The prime minister said that it is important to strike a balance between the gathering of people and the safety of their livelihoods. “We are going to provide incentives for the construction industry to create employment opportunities. We want people to exercise discipline, rather than shutting down cities,” he added.

He also said that in the National Coordination Committee (NCC) meeting held earlier in the day, it was decided that the country would not be locked down.

He further said that work is underway on creating a financial package that will be announced next Tuesday. “All stakeholders, including State Bank of Pakistan (SBP), Ministry of Finance and Federal Board of Revenue (FBR) are involved in the preparation of this package to provide incentives,” he added.

The prime minister also urged the international community to lift sanctions from Iran as they are dealing with a coronavirus outbreak despite having limited resources and medical facilities.

Addressing the journalists, Dr Mirza said that it has been decided that verified data about coronavirus patients will be disseminated and people will be updated on a daily basis.

He underscored the vital and responsible role of the media in creating awareness and preventing panic among masses. He also urged the media to avoid sharing personal information of patients.

Adviser on Finance Dr Abdul Hafeez Shaikh said that the government is working on a joint strategy to bring a stimulus package for the areas being economically hurt due to coronavirus. He said that the economic indicators of the country were showing progress before the coronavirus outbreak. “Now, as the global economy is slowing down due to the pandemic, our exports are also likely to be impacted and our foreign remittances are also likely to be reduced,” he said.

“Therefore, a survey is being conducted to understand which industries are being hurt the most in this crisis. He said that as part of the stimulus measures, taxes will be reduced on certain products whereas subsidy will be given on others,” he added.

The adviser said that every effort will be made to ensure that relief of Rs280 billion is given to farmers. Disbursements under the Ehsas programme will also be accelerated so that vulnerable segments of the society are not hurt by the coronavirus threat, he added.