Electricity generation in Pakistan rising, despite the pandemic

Despite the blip of Covid-19 pandemic on power generation in the country, demand for the sector has picked up

The year 2020 has not been kind to most sectors of the economy, what with the double whammy of a global pandemic and the ensuing global recession. Yet, all things considered, it is remarkable that power generation in Pakistan actually fared alright, declining only marginally when comparing fiscal year 2020 to 2019. Even better, demand for power has picked up in June 2020, according to Sunny Kumar, analyst at Topline Securities, in a note sent to clients on July 23.

Power generation in Pakistan declined by 1% year-on-year to 121,867 gigawatt-hours (GWh), or 23,618 megawatts (MW) during fiscal year 2020. In 2019, power generation stoof at 122,708 GWh, or 23,781 MW. Most of this decline can be attributed to the overall slower economic activity during fiscal year 2020, leading to less usage of power, but also the specific time period between March and May 2020, when the Covid-19 necessitated lockdowns and restrictions.

In fact, these factors together mean that the power sector is well positioned in the future for any increase in demand. And demand will increase, as industries have opened up after the lockdowns imposed due to the Covid-19 pandemic, and there has been a pick up in economic activity in the country. The summer and monsoon seasons also typically see an uptick in demand for power, which will help the sector at least until October 2020. 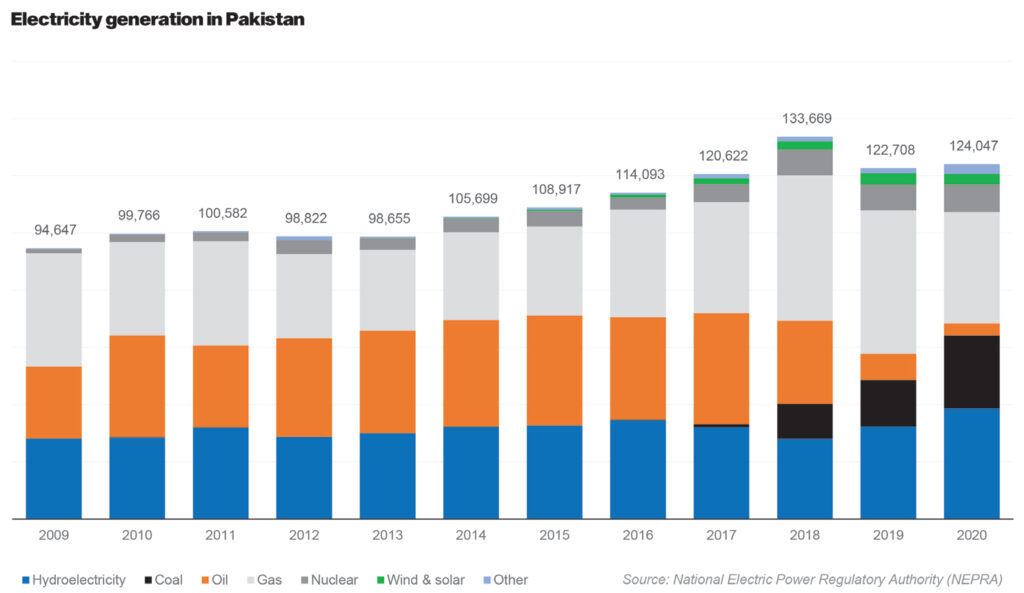 In terms of power generation, hydel generation went from 32,356 GWh in fiscal year 2019, to 38,000 GWh in fiscal year 2020, or a 20% year-on-year jump. According to Kumar, hydel power generation increased because there was more water available this year compared to previous years. Incidentally, this particular statistic was recently picked up by Asad Umar, the Minister for Planning, Development and Special Initiatives, who tweeted: “Massive hydel capacity increase taking place with Dasu, Mohmand and Diamir Basha being built. We need to rely on local renewable energy instead of expensive imported thermal fuels.”

Coal power generation went up from 16,312 GWh in 2019 to 25,553 GWh in 2020, a massive jump of 57% year-on-year. This section has increased because of two new projects finally commencing this fiscal year: the China Hub Power Generation, with production of around 1,220 MW, and Engro Powergen Thar, which can produce 660 MW.

Another blow to local governance

If the FBR is found to be taxing property, it will go against the spirit of the 18th amendment, and weaken the struggle for local governments
Read more
FEATURED

Despite its great capability, Pakistan’s food security is hanging by a thread. Profit identifies key indicators of the systemic problems our agriculture faces
Read more