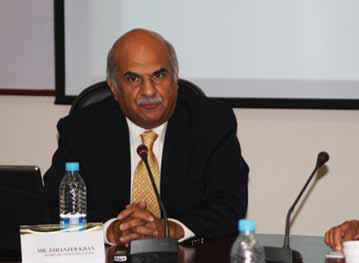 ISLAMABAD: After serving for almost an year as the Planning Commission deputy chairman, Dr Mohammad Jahanzeb Khanhas been reappointed on the same post for a period of three years.

Dr Khan was due to retire from his current appointment on August 1, 2020.

However, according to official sources, Prime Minister Imran Khan, while considering his experience of serving in various institutions as a development professional, reappointed Dr Khan for a further three year tenure on his current position.

Dr Khan, who has previously served as the Federal Board of Revenue (FBR) chairman, had been serving as Planning Commission deputy chairman since the past year. Earlier in 2019, the government had reverted the post to a federal secretary after a period of 23 years.

According to an official notification, Dr Khan, a BS-22 officer of Pakistan Administrative Service, upon reaching superannuation was appointed and posted as Planning Commission deputy chairman for a period of three years from August 2, 2020.

Moreover, he has also served as Pakistan’s commercial counsellor in France for a period of five years and was later appointed as ambassador to the country.

Since 1952, the Planning Commission has had a major influence and role in formulating the highly centralised five-year plans for the national economy during most of the 20th century.

Although five-year plans were replaced by medium-term development framework, the commission still plays an influential and central role in the development programme.

The Public Sector Development Programme (PSDP) also comes under the domain of the Planning Commission, which is led by the prime minister as chairman.

Since its inception in the early 1950s, the post of deputy chairman of the Planning Commission was mostly held by civil servants having a background in economics with some exceptions until the retirement of Qazi Aleemullah in 1996. The post was then shifted to technocrats and politicians.