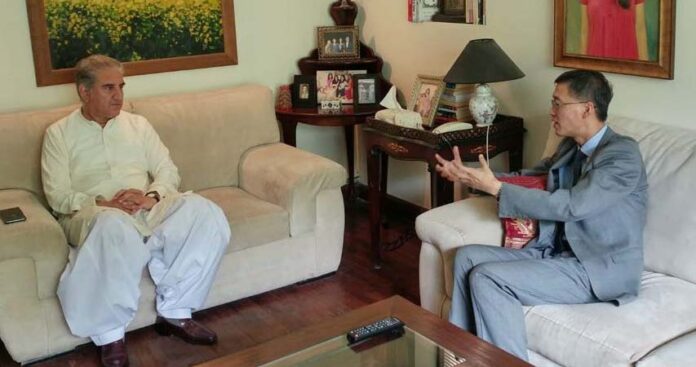 ISLAMABAD: Foreign Minister Shah Mahmood Qureshi has emphasized the need for deeper cooperation between Pakistan and China in the agriculture sector.

Talking to Chinese Ambassador Yao Jing on Wednesday, the foreign minister said that agriculture is the mainstay of Pakistan’s economy, as the sector employs a large part of the country’s productive labour force.

The foreign minister said that there is a greater need to revamp and modernize the agriculture sector with China’s cooperation and unleash the second ‘Green Revolution’ in Pakistan.

He said that China has introduced wide-ranging reforms in its agriculture sector that has contributed significantly to its GDP and it is imperative for Pakistan to benefit from these experiences.

Welcoming the establishment of Joint Working Group on Agriculture Cooperation under CPEC, Qureshi emphasized that the inclusion of agriculture in CPEC will promote industrialisation and modernisation of the agriculture economy.

He thanked China for helping Pakistan fight locust plague through the provision of pesticides, machinery and drones.

The foreign minister stresses that the Foot and Mouth Disease (FMD) free zone will help Pakistan in the export of meat to China and, in this regard, urged China to send a team of its technical experts to Pakistan to visit relevant facilities and expedite exports of meat to China.

Ambassador Yao Jing thanked Foreign Minister Qureshi for holding a meeting on a subject that is of vital national importance to Pakistan and hoped that, with the foreign minister’s personal attention, the cooperation between China and Pakistan in the agriculture sector will grow and solidify leading to substantial economic benefits for Pakistan and its people.

He underlined that China would like to collaborate with Pakistan in setting up agriculture technology centers, joint research centre for plant pest and disease control, and FMD zones in Pakistan. He added that under the Second Phase of FTA, China would also welcome import of agriculture products from Pakistan.

Qureshi thanked the ambassador for the measures that Beijing is taking to support Pakistan’s agriculture sector and stressed that the business sectors of both countries must also explore joint ventures in tapping the potential of the agriculture sector.