The publicly listed housing development suffers from atrocious rain mismanagement, and its sales numbers reflect eroding confidence on the part of prospective buyers 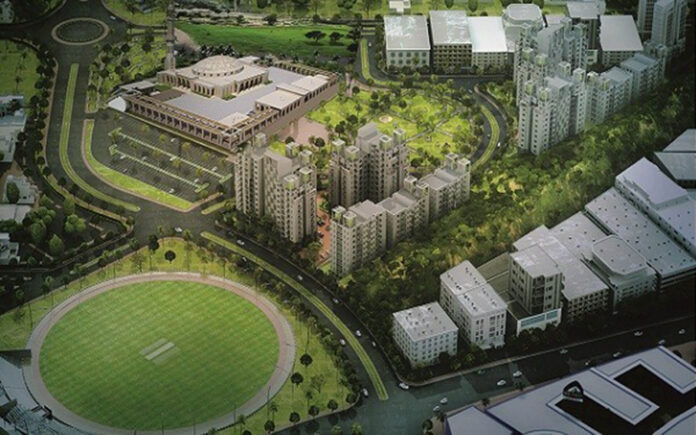 The video begins with a man, elbow deep in brown water, standing in what appears to be a completely submerged street in a residential area. Looking directly at the camera, the man begins to describe his ordeal: the Naya Nazimabad real estate development had been completely flooded, that it had been 10 days and that there had been no sign of water receding, and that the administration of the housing complex was refusing to allow outside help.

The video was shot in the aftermath of the torrential monsoon rains in the last week of August, that killed at least 31 people in Sindh, and destroyed entire sections of Karachi. Rich and poor neighbourhoods were hit alike (though rich neighbourhoods benefited from higher coverage).

And yet even in the inundation of WhatsApp forwards of street views and drone shots of the submerged city, this one video from Naya Nazimabad – and several others – stood out. Headlines included “Scores displaced from Naya Nazimabad” and “Naya Nazimabad residents tell stories of destruction after Karachi rain”. Reports suggested that the flooding was due to poor urban planning on the part of the contractors hired by the Arif Habib Group; meanwhile, the project’s executive director insisted encroachments caused the floods.

How did one of Arif Habib Group’s star projects have such a massive publicity scandal? And it is just one of Naya Nazimabad’s many problems: because the company’s financials were just released to the Pakistan Stock Exchange (PSX) on October 2, and the results are not kind.

It was not meant to be this way for Naya Nazimabad. The housing development was meant to echo the original Nazimabad, a middle class suburban neighbourhood in Karachi established in 1952. As they housed mostly refugees and immigrants from India, these neighbourhoods came to embody the promise of ‘Pakistan’ – prosperity for the middle class. To this day, they command some of the highest per-square-foot prices in Pakistani real estate.

Now, Arif Habib Group, the conglomerate started in 1970, owns majority shares in Javedan Corporation, which was incorporated in 1961 and started off as a cement factory. Javedan owns around 1,300 acres of land at Manghopir, near SITE in Karachi. The area used to house Javedan’s cement plant, dilapidated by years of neglect, which in the last decade was converted in 2012 to a housing project, or Naya Nazimabad.

As a project, Naya Nazimabad was conceived to “accommodate the housing demand of the middle income group and to provide a quality lifestyle for the progressive middle class,” according to its website. The land is divided up into eight blocks (A, B, C, D, K, L, M, N), with each block designed to have its own commercial area, mosque, and park. The houses are divided up into 120, 160, 240 and 400 square yards residential plots. Once fully made, the project will have up to 30,000 homes, accommodating a population of over 100,000 people.

According to Javedan’s annual report of 2019, the company delivered around 4,000 units of developed plots and bungalows. The infrastructure development work for blocks A, B, C and D have been completed, while development in block M is still ongoing. Portions of block K and L were also open for sale. More than 400 families were settled in Naya Nazimabad in fiscal year 2019, while the total number of residents reached around 500.

So much for that. We do not know how many additional families were settled in 2020 but reports said that at least 400 families – or the entire size of the 2019 families – were displaced because of the rains. Of the four completed blocks, clocks C and D were most affected, and the most residents displaced were from block D.

And yet, despite shoddy construction, Arif Habib is not too concerned. In September’s annual general meeting, Javedan Corporation asked for Rs750 million in fresh investment. The equity injection was to finance several construction projects, including a giant flyover to connect Naya Nazimbad with Karachi, which bypasses the Nusrat Bhutto colony to the Naya Nazimabad Gymkhana.

It also helps that the federal government announced an incentive package for the real estate and construction industry in April 2020, making it lucrative to join the construction sector. Yet if the government’s policy on encouraging housing is to succeed, middle class buyers need to have confidence that their life’s savings are not being sunk into housing that will literally disappear beneath the waves of urban floods.