Analysis: A tulip by another name? ‘Gamestonk’ and the case for investor caution 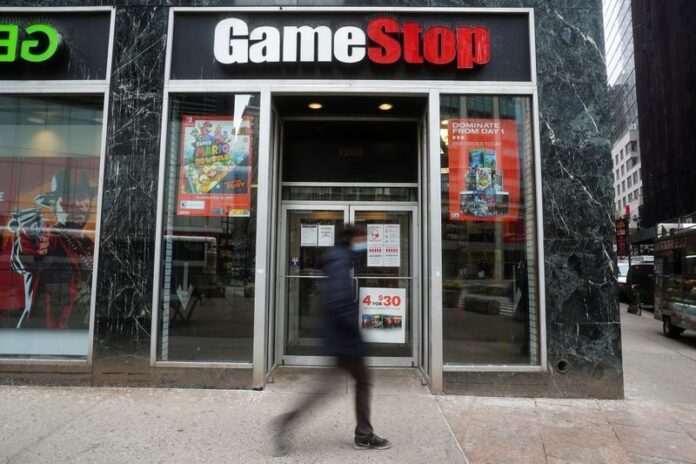 NEW YORK: It sounds like the start of a parable: Investors stuck inside during a pandemic begin to bid up an asset until its price becomes untethered to reality. The value soars until one day the market runs out of buyers and freezes, causing prices to plummet and some unlucky few to lose fortunes more than ten times their annual incomes in the span of a few hours.

The date: February 3, 1636. On that day, the infamous Dutch tulip bubble burst during an outbreak of the bubonic plague, illustrating that asset prices can plummet just as quickly as they soar, leaving only pain behind.

Now, almost exactly 385 years and another pandemic later, Wall Street waits to see how long it will take for history to repeat itself.

Shares of video game retailer GameStop Corp have soared 1,625% since the start of January. Driving the rally are individual investors who have been stuck at home for the last ten months. Many have turned to online forums like WallStreetBets on Reddit and are buying the stock, some as a form of protest against hedge fund managers who wagered that it would fall.

These amateur investors are buoyed by savings built up over the coronavirus pandemic, two rounds of stimulus payments and near zero interest rates. Some, such as billionaire entrepreneur Elon Musk, have referred to the phenomenon as ‘Gamestonk’, a play on the intentional misspelling of the word ‘stock’ on social media.

The stock price rally to above $300 per share has emboldened some small investors to pour even more money into a company that Wall Street analysts tracked by Refinitiv believe is worth slightly more than $13 per share. The surge increases the risk that individuals will get caught up in the euphoria and look past the warning signs and consequences of an eventual crash.

“I dumped my savings into GME, paid my rent for this month with my credit card, and dumped my rent money into more GME (which for the people here at WSB, I would not recommend),” a Reddit user with the handle ssauron here wrote Thursday on WallStreetBets. “And I’m holding. This is personal for me, and millions of others.”

A form of class warfare waged through the shares of a video game retailer is notably different than financial market manias, such as the dotcom bubble in 2000 or the U.S. real estate bubble that culminated in the 2008 financial crisis, both which were fueled by assumptions of broad economic growth.

Yet for those who buy GameStop at the wrong time, the results will likely be the same.

“The reality is that GameStop doesn’t hurt Wall Street. It might hurt a couple of hedge fund managers out there, but no one is going to cry for them. The people who will be losing their life savings are small retail investors,” said Ben Inker, head of asset allocation at GMO.

The total value of short positions in Reddit-favored stocks such as GameStop is about $40 billion, limiting the pain among professional investors to a handful of hedge funds, according to Barclays.

Overall, GameStop shorts were down about $5 billion for the year through Tuesday, according to S3 Partners. By comparison, Tesla Inc, another heavily-shorted stock among professional investors, caused short sellers $245 billion in losses in 2020, the firm noted.

“While we expect some more deleveraging, ultimately the scale of the problem appears quite limited,” Barclays said.

The likelihood that most of the losses from the rally in GameStop will come among the same group of retail investors who prodded it higher is leaving many on Wall Street baffled as the bubble continues to grow. GameStop surged 67.9% higher Friday to close at $325 per share.

The dotcom bubble peaked in March 2000 and over the next two years the tech-heavy Nasdaq Composite Index slid nearly 77% as companies that were touted as can’t miss investments ran out of financing. By the time the Nasdaq bottomed in October 2002, some $6.2 trillion in household wealth had been destroyed, according to Amir Sufi, a professor at the University of Chicago.

The 2008 financial crisis, meanwhile, wiped away approximately $16.4 trillion from American households through a combination of steep stock market losses and plummeting home equity, according to the Federal Reserve.

No one expects that the GameStop bubble will cause anything close to the same levels of economic pain as the financial crisis or dotcom bust before it, in part because the company has a low share count and was not widely held by institutional or retail investors prior to the start of the year. With $6.5 billion in revenues in its last fiscal year and fewer than 53,000 employees worldwide, it does not have an outsized economic impact.

Yet a fall will be concentrated on those who helped upend Wall Street’s notion of what retail investors can do.

“There’s going to be some blood on the floor when this is all over, but that’s going to be some hedge fund blood and a lot of retail blood,” said Donald Langevoort, a professor at Georgetown Law who studies retail investors and securities regulation.

Melvin Capital and Citron Research, two prominent GameStop short-sellers, said earlier this week that they had already closed out their positions.

Securities laws that typically protect smaller investors from fraud may be of little help for investors who buy shares of GameStop at elevated levels, Langevoort said.

“I don’t know if there is an organization or orchestrator that is using deceit and trickery, especially when the motivation seems to be ‘Let’s support GameStop and show them,’” he said. “The SEC has to take a deep breath and ask itself whether it has a strong enough case to put a stop to this.”

‘LIFE OF ITS OWN’

The outsized rally in GameStop is happening at a time when valuations across financial markets appear to be stretched. The S&P 500 index trades at a forward price to earnings ratio of 23.1, near its peak during the dotcom bubble, while the cryptocurrency bitcoin jumped 14% Friday after gaining 265% over the past 12 months.

The rise of commission-free trading platforms such as Robinhood have helped inflate asset market bubbles by lowering the bar for retail investors to trade, said Ronnie Sadka, a finance professor at Boston College.

“Retail investors are becoming a systemic risk,” that the SEC is ill-prepared to handle, he said. “The challenge with regulation is that this is not a case where Wall Street is squeezing the mom and pops, this is a case where the short-sellers are getting squeezed.”

The surging value of GameStop shares is luring investors who will most likely be burned in the end, said Michael Pachter, an analyst at Wedbush Securities who has a $16 price target for the company.

“This is the tulip bubble all over again,” he said, adding that he received a call from a friend who bragged that he put $1,000 into Reddit favorites such as GameStop, AMC Entertainment Holdings Inc and BlackBerry Ltd and was now up $400,000 in two weeks. “He doesn’t even know what GameStop sells,” Pachter said.

How will the GameStop mania end? If it is like the original tulip bubble, it could lead to a “short-term crisis of trust” in financial markets, said Anne Goldgar, a professor at the University of Southern California.

Every jump in the price of GameStop, meanwhile, brings in more short-sellers enticed by ever-growing potential gains and more buyers looking to stick a thumb in the eye of Wall Street, causing the cycle to continue, Pachter said.

“This thing has a life of its own,” Pachter said.