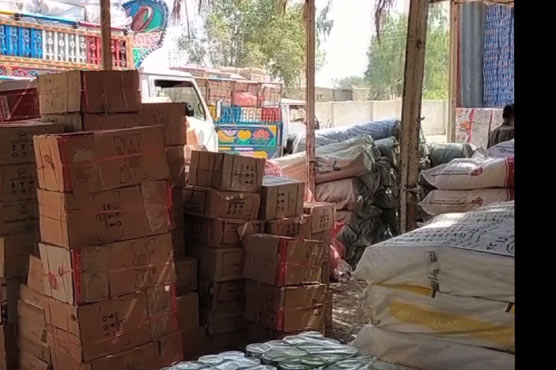 PESHAWAR: Traders and transporters across Khyber Pakhtunkhwa (KP) on Sunday announced protests against the alleged seizure of local goods by KP Customs officials and the imposition of heavy fines.
Peshawar Goods Trackers Association (PGTA) Senior Vice-President, Zafar Khattak,
alleged that customs officials usually demand a bribe of a few hundred thousand rupees from traders and transporters to clear legal goods, while on the other hand, despite the completion of fencing on the Pak-Afghan border, non-customs paid goods are entering the country “with the connivance of customs officials”.
Khattak said that Customs officials let these goods enter the country through Torkham Gate in exchange for hefty bribes after which all these goods are supplied to cities across the country.
“Sacks full of non-custom paid tea and mobile accessories from Peshawar Saddar are transported to other parts of the province through the same routes all the time but officials ‘ignore’ it. However, they declare legal goods as non-custom paid until they are paid bribes,” he said.
According to sources, despite weekly off federal agencies officials at Azakhel Dry Port are clearing containers for Rs60, 000 per container on weekends, a practice which they said was damaging the national exchequer besides, promoting smuggling.
The traders demanded Prime Minister (PM) Imran Khan, FBR chairman, Chief Justice of Pakistan (CJP) and Peshawar High Court (PHC) chief justice to take notice of the matter, ordering an investigation and assets of Pakistan Customs officers and personnel.

KP Customs officials on the other hand rejected the allegations, alleging that non-customs paid goods are being smuggled into the country through border crossings in Balochistan.