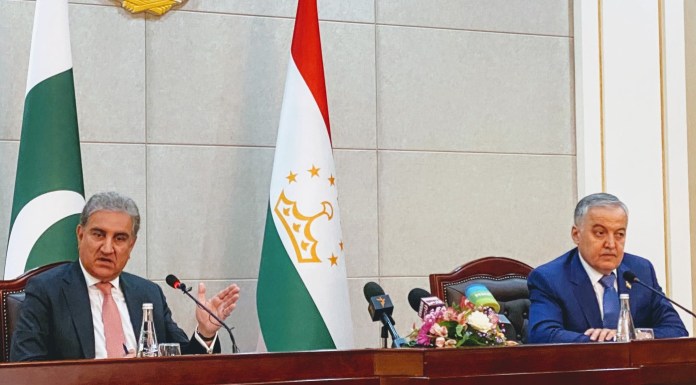 In this regard, Foreign Minister Shah Mahmood Qureshi on Wednesday said that there were a lot of opportunities in different fields to further strengthen relations between Pakistan and Tajikistan

Addressing a press conference with his Tajik counterpart, Sirajuddin Mehruddin, in Dushanbe, Qureshi thanked Mehruddin for a “great meeting” to discuss the “spectrum of bilateral ties”.

Thank you FM #SirojiddinMuhriddin for a great meeting discussing spectrum of bilateral ties. Together we agreed to tap into potential of those areas, as yet unexplored, to engage more meaningfully, specifically across trade, tourism and people to people engagement.
🇵🇰 🤝 🇹🇯 pic.twitter.com/O9VmJAv5mE

Qureshi is in Tajik capital as part of his visit to attend the 9th Heart of Asia — Istanbul Process (HoA-IP) Ministerial Conference.

He said that Islamabad believed CASA-1000, a regional electricity generation project linking Central Asia and South Asia, would not only benefit the two nations but the entire region.

Launched in 2016, the $1.2 billion, 750-kilometre-long transmission line which is expected to be complete by 2018 will allow Pakistan to import electricity from Tajikistan and Kyrgyzstan via Afghanistan to minimise the country’s now-shrunken electricity deficit.

He said that he was pleased to learn through Mehruddin that Tajikistan President Emomali Rahmon, in a meeting with Afghan President Ashraf Ghani, had “stressed the need for a tripartite transit trade agreement among Tajikistan, Afghanistan, and Pakistan”.

He also said that Pakistan on its part would pursue the matter of tripartite agreement with the Afghan leadership for the benefit of the three nations.

Qureshi also expressed satisfaction that bilateral relations with Tajikistan had strengthened with time in line with the two joint declarations of 2017 and 2018 to promote cooperation.

In a meeting with his Tajik counterpart, Qureshi said that it was agreed to renew the spirit of the existing roadmap for bilateral co-operation and also decided to activate the joint working groups and the intergovernmental commissions.

Qureshi invited influential businessmen from both countries to strengthen trade relations and offered to facilitate the Tajik investors.

Mehruddin — while terming the meeting with Qureshi a “meaningful dialogue” — said it focused on important global and regional issues.

He said that Pakistan’s Commitment to the CASA-1000 project was “commendable” and hoped that its completion would further strengthen relations between the two countries.

The two sides stressed the need to increase bilateral trade volume to enhance trade relations between the two countries.

Gwadar and the country’s other seaports could help boost bilateral trade volume between Pakistan and Tajikistan, he said.

The two sides hoped that the holding of the 5th Bilateral Political Consultative Meeting between Pakistan and Tajikistan would pave the way for the promotion of cooperation between the two countries in various fields.