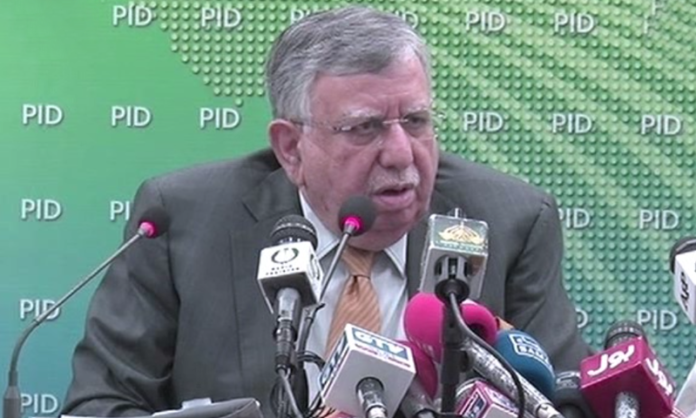 ISLAMABAD: Finance Minister Shaukat Tarin said on Wednesday that Pakistan had informed the International Monitory Fund (IMF) that increasing taxes or tariffs was currently unfeasible under the IMF programme, adding that Prime Minister Imran Khan is against a tariff hike.

Flanked by Special Assistant to the Prime Minister (SAPM) on Revenue, Dr Waqar Masood, and other officials in his first media briefing in Islamabad, the finance minister, however, ruled out exiting the programme, saying the government has only asked the Fund to not assign revenue targets as the country is battling the third wave of Covid-19.

“Pakistan has not yet come out of the IMF programme, we have told them that our revenues were increasing at 92 per cent but the third wave of Covid has caused some decreases, ” Tarin said.

“We will refuse the IMF’s demand to increase the power tariff because our common man is fed up of inflation,” the finance minister said, adding that streamlining revenue and power sectors are an important challenges but inflation would have a cascading effect.

“We will increase the tax network [to achieve the desired targets],” he maintained.

Talking about taxation, he said its ambit would be further increased through innovative methods whereas the tax-to-GDP ratio would increase every year by one to two per cent. “The sudden increases on the orders of the IMF, as done in 2019, would not happen. This is the wrong way of doing it,” he said.

Instead, he said, gradual annual increases would be the better way to go and efforts would be made to convince the IMF about it.

He observed that 90 per cent of programmes of the organisation fail because of its tough conditions and went on to add that there is a “political price of signing a deal with the IMF”.

He said that the government entered into an agreement with the organisation despite tough conditions which previous governments had not been asked to fulfill. “We went to the IMF to fill the gap left by the $20 billion deficit, and complied with the programme. But I think the government, despite those strict conditions, followed it and went towards stability”.

Talking about economic activities linked with development of projects under China Pakistan Economic Corridor (CPEC), the finance minister said that since a number of Chinese companies are relocating their units to various countries of the world, the government would request them to relocate some industries to Special Economic Zones (SEZs) in Pakistan.

About reforms in State Owned Enterprises (SOEs), he said the private sector would soon be given control of the entities.

Tarin also announced to start the Kamyab Kisan programme aimed at incentivising farmers as existing incentives for the agriculture sector had negligible trickle down effects.

Talking about the rising inflation, the finance minister claimed that middlemen in the business of agriculture goods were pocketing over 35 per cent of the price being charged to consumers. He said strategic reserve centers would be established to ensure farmers are not blackmailed as price stability is imperative.

Regarding his plan in the banking sector, the finance minister said that banks would be asked to increase the number of lending. “Banks in KP, despite being facilitated by the government are lending Rs50 billion out of Rs600 billion capacity.”

Earlier the minister said twelve working groups have been constituted in the Economic Advisory Council to frame short, medium, and long-term policies for different sectors. The goal will be achieved by incentivising industries, agriculture and housing sectors, which will also provide job opportunities to the people.

Separately, Shaukat Tarin said Pakistan is looking forward to further deepen trade and investment ties with the US.

He was meeting with Angela P. Aggeler, Charge d’ Affaires of the United States to Pakistan, who called on him, at the Finance Division.
While extending a warm welcome to Angela Aggeler, the finance minister stated that  Pakistan is looking forward to further deepen trade and investment ties with the US under the new administration.
“Coupled with 220 million consumer market, growing middle class and a young vibrant population, Pakistan offers immense opportunities for the US enterprises to invest in sectors such as information technology, agriculture, energy and tourism,” he added.
- Advertisement -
Facebook
Twitter
Linkedin
WhatsApp
Email
Previous articleS&P Dow Jones launches new crypto indexes
Next articleExternal debt servicing to stay above $10bn next fiscal