Claims FY21 exports to be highest in last decade 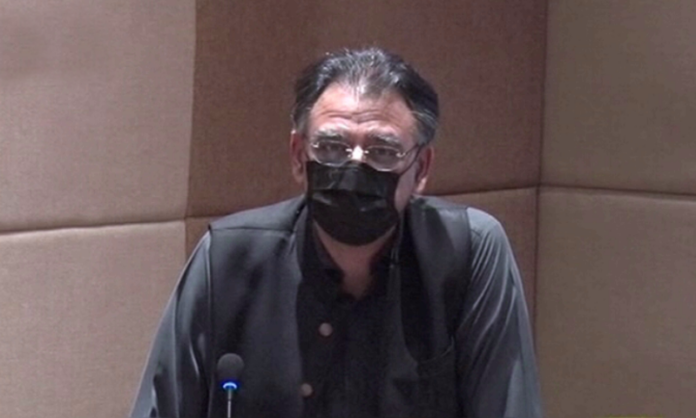 ISLAMABAD: Federal Minister for Planning and Development Asad Umar has said if the expected gross domestic product growth rate of 3.94 per cent for the current fiscal year and increase in remittances are combined, it will take the gross national product growth to 6.5 per cent, which is the highest GNP growth in the last 16 years.

Addressing a press conference on Friday, the planning minister said that Pakistan has set a 4.8 per cent GDP growth target for the financial year 2021-22.

He said that the country is on the course to achieve 3.94 percent GDP growth for the outgoing 2020-21 year, adding: “This growth is an indicator that the revival that has started is continuing its momentum.”

Highlighting the achievements of the government, Umar said in the nine months of the current fiscal year, IT exports showed growth of 46 per cent.

He said that the country witnessed a strong growth during the fiscal year, and it is expected that the remittances would shoot up from $21.7 billion to $29.1 billion till the year end — an increase of 34 per cent in a year. Asad said remittances played an important role in helping the country’s economy grow, adding, “It is important that we should give overseas Pakistanis the right to vote.”

Shedding light on why the government is expecting a 4.8 percent GDP growth in FY 2021-22, he said that the government has invested in the agricultural sector which will greatly benefit the economy.

He also said that last year and this year cotton fields were badly affected, however, the government has now bought good quality seeds, stressed on the use of pesticides, and the demand for cotton has increased in the international market since. “And so, after consultations with all the provinces, we have concluded that Pakistan can produce 10.5 million bales — 4 million from Sindh, 6 million from Punjab, and the rest from other provinces.”

Asad said that the livestock industry has also been adversely impacted by the coronavirus, but in the next fiscal year, it will move towards normalisation, and growth in this sector, too, will be visible.

The federal minister said that electricity consumption is expected to grow by 6 percent, and after the government has announced a package for the industries, their power consumption has gone up 15 percent during the current fiscal — and in the next year, it is predicted to go up further.

Growth is expected in gas, coal, and construction, among several other sectors. “Exports are predicted to go up, this year it stood at $25.2 billion, and in the next year, it will move up to $26.8 billion.”

The federal minister said this year’s $25.2 billion worth of exports are the country’s highest figures in the last 10 years. “It is unfortunate — that the backbone of the economy, exports, faced several setbacks during the previous year.” Asad said that the next year’s target for exports, $26.8, would be the highest in the country’s history.

Furthermore, the federal minister said that he wanted to see no restrictions in place on Eid-ul-Azha so businesses and traders could be free to work. “The faster we increase vaccinations, the sooner we will get the opportunity to remove all restrictions,” he added.

Asad said that a meeting of the NCOC would be called next week to launch a national campaign where the Federation of Pakistan Chambers of Commerce and Industry, trade associations and other stakeholders would be invited to work together on vaccinations.

He added that in a meeting of the Economic Coordination Committee last week, he had highlighted that some sectors and industries such as restaurants, marriage halls and education institutions had faced “exceptional injury” due to Covid restrictions.

“I said that we should announce a special package for the people associated with these sectors because the pain they have suffered has benefited society.”

Asad said the finance minister had accepted this proposal and a decision was made that a package would be formulated by the relevant ministers and bodies.

The federal minister also highlighted Pakistan’s economic performance during the Covid-19 pandemic and pointed out that while India had contracted and many fast-growing economies had also seen negative growth, “we more or less [achieved] breakeven.”