The nation is curious: exactly how much did one of the fanciest buildings in the largest city sell for? 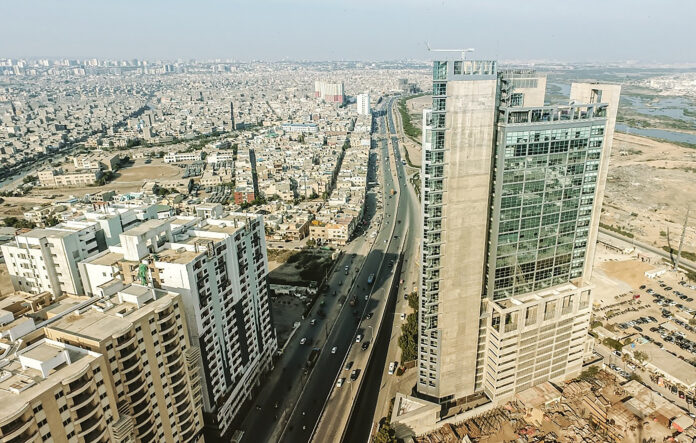 On May 17, TPL Properties and Bank Al Habib said that it successfully completed the sale and transaction of the TPL’s  flagship project ‘Centrepoint’, which is located off Shaheed-e-Millat Expressway near KPT Interchange, Karachi.This has been several months in the making – its a follow up from the earlier notice the company sent to the PSX on August 20, 2020, in which Bank Al Habib said it had decided to purchase the building.

TPL Properties is the property arm of TPL Corp Ltd., a technology conglomerate that today focuses on auto, fire, life and health insurance, real estate development and security services. TPL Properties Limited itself was incorporated in Pakistan as a private limited company in February 2007. Subsequently in 2016, the company changed its status from private limited company to public company.

Centrepoint happens to be, quite literally, the center of TPL’s ambitions. This is one of the biggest developments in the real estate sector of Pakistan. Some facts about the building: the 28-story Centrepoint, stands 385 feet high, and has been constructed on 26,226 square feet of land. It has 197,810 square feet of rentable space, with the offices on 17 ﬂoors (from the 11th floor to the 24th, and the 26th and 27th floor).

The building is considered TPL properties flagship project, and has been built accordingly, with facilities such as built-in IT infrastructure, international standards of security and fire safety, nine floors of dedicated parking, and an in-house independent power generation unit. The high-rise, which according to TPL has been designed in mind for a ‘high-end corporation’, also features a health club, a swimming pool, and a coffee bar.

Here’s the problem: the company managed to share information down to the coffee bar, and not the actual valuation and sale price. As twitter user Rasheed Narejo tweeted: “Now that the deal has been successfully completed, I wonder what is still restraining buyer (Bank Al Habib) & Seller (TPL) to disclose sale price? By now every major shareholder (with board seat or contact with board) would definitely be aware of the transaction.”

He went on to add: “I am aware that these transactions are always subject to adjustment but company can put this disclaimer with transaction disclosure.Withholding of critical material information from minority shareholders have become a norm, under the guise of complying with minimum regulatory requirements. Is it still material information if the selling price is not disclosed?”

Profit posed the same questions to Ali Asgher, the chief operating officer of TPL Corporation, who took the viewpoint that this was entirely a non-issue. “It’s not required and it’s a commercial decision,” he wrote in a short message to Profit.

Instead, he said the information was present to anyone who chose to look at the latest financials. As of March 31, 2021, the latest period for which the financials are available, TPL Properties carries Centrepoint on its balance sheet at Rs7,647 million or around $49 million. According to Asgher, the sale amount is at or higher than this price, while the actual figure will be available in the annual report, released at the end of June this year.

The figure of $49 million may seem like a lot, but it is not the largest amount that a bank has actually paid for a building. Consider that in 2017, Habib Bank Ltd, paid Rs14,440 million then worth $137 million for the new HBL Tower in Clifton Karachi They bought this form Mega and Forbes, the shipping conglomerate owned by the reclusive billionaire Habibullah Khan.

But even if it is not the most amount a bank has paid, Bank Al Habib still desperately needed a building – any building, really. Its old office was in a small building on II Chundrigar, quite literally in the shadow of Habib Bank Plaza. That visual comparison alone says a lot about Bank Al Habib’s relationship with HBL – which used to be part of the Habib Family, before it was forcibly nationalized in 1974. The Habib grandson reentered the bank space in 1991, when the government allowed for privatization.

It would be good for the bank to escape the shadow of the much larger bank, since Bank Al Habib itself is doing quite well. It was the seventh largest bank in Pakistan by deposits, crossing the Rs1 trillion mark in September 2020. Its profit after tax at the end of year in 2020 stood at Rs28.6 billion.

The decision also represents a bit of change of address for any large commercial bank. For years, the financial hub of the city was concentrated on I.I. Chundrigrar road, where the State Bank of Pakistan and the Pakistan Stock Exchange are also located Other companies, not necessarily banks, would set up along the Shahrah-e-Faisal artery. But now, those hubs are changing: consider Harbour Front, at the edge of the sea, or even HBL’s own building, at Teen Talwar (overlooking Gulf Market, which has undergone a much needed facelift of its own). TPL Properties has also promoted the project’s location as another alternative, pointing out its ease of access to Defense, Korangi, and the airport.

What about TPL Properties itself? The transaction is just the latest in a series of interesting decisions the company has taken in the last few years. For instance, in January 2019, TPL Properties signed a memorandum of understanding with Equitativa, the largest real estate investment trust (REIT) manager in the UAE, to form a REIT Management Company (RMC) in Pakistan. Equitativa has over  $2 billion of assets under management in the UAE, and the event marked the first foreign direct investment in this sector after amendments in the regulations.

Second, TPL Properties bought the 129-year-old Katrak Mansion, a heritage building close to Frere Hall. Why does it matter if some old colonial building is now in their possession? Because it represents an investment in the skyline of the city. The mansion is a heritage site in an extremely high-value commercial-residential area, and yet crucially, the pre-Partition mansion will not be turned into a high-rise structure. Instead, the architects intend to restore the building from the outside, while constructing residential apartments inside – and there may even be plans for a museum located as well.

Third, the company has decided to build a technology park in Korangi, Karachi. According to the company, “The Technology Park will be the first of its kind of such scale in the province of Sindh, with high end technology facilities. Such a platform with high end IT infrastructure shall provide a platform to several IT sector companies across Pakistan.” TPL Properties estimates the project will be completed in two years, including planning and designing.

And that’s just what they have done so far. According to the company’s last annual report, selling Centrepoint “has opened up various new avenues for us in terms of acquiring more real estate for development. We are actively exploring these new development avenues with a focus on the Karachi market.”

Perhaps that is why the company did not think too much of sharing the transaction price. After all, that is the least of what’s on their plate.