Says govt not to increase power tariff immediately; friendship with China not to affect "major strategic partnership" with US 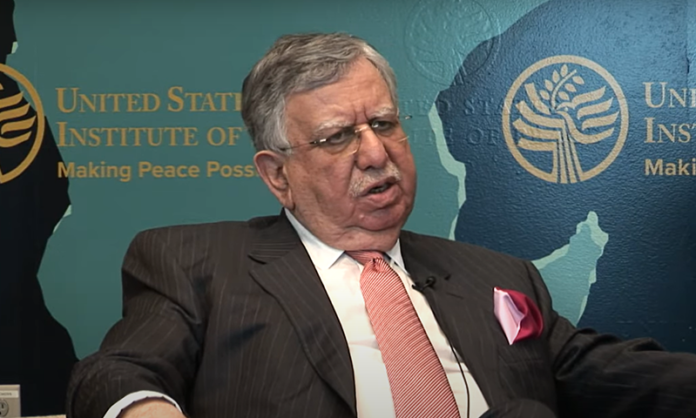 ISLAMABAD: Federal Minister for Finance Shaukat Tarin on Thursday expressed hope that top-level negotiations between Pakistan and the International Monetary Fund (IMF) would be successful and the $6 billion Extended Fund Facility (EFF) would be put back on track.

“I believe that the progress we have made to date is really encouraging and as we say, God willing, I see this happening now in this visit,” he said in an interview at the United States Institute of Peace.

The minister said that the concluding sixth round of talks with the IMF was the most important part of his visit to the US, adding that many virtual meetings had already taken place while the technical level discussions had also concluded.

He said, at the final stage, meetings would be held with seniors at the IMF, including the Fund’s managing director.

The minister said his government believed that IMF’s demand to increase power tariffs would trigger inflation, adding that this point was made in the technical discussion with the Fund, which was also informed that the increase in tariff would be made in a gradual manner so that it does not have an abrupt impact on inflation.

Tarin said that there were some problems in the power sector, including excess capacity, for which the government had to pay, adding that the performance of distribution and generation companies was also being improved. He said all this was being successfully negotiated with the IMF.

The minister said that there was no stagnation in growth and the Pakistani economy would grow by over five per cent during the fiscal year 2021-22.

He said that back in the 1960s, Pakistan’s economy was the fourth-largest in Asia. However, Zulfiqar Ali Bhutto’s nationalisation policy and the Afghan war in 1979 disrupted economic growth, he added.

Tarin said Prime Minister Imran Khan took over an economy that was struggling in 2018 with a $20bn current account deficit, unsustainable fiscal deficit, adding that the premier had to go for a tough IMF programme besides taking some politically unpopular decisions including currency devaluation, increasing the discount rate and increasing utility prices.

The minister said that as the country’s economy started consolidating and growing, the Covid-19 pandemic hit the world.

However, it was skillfully dealt with by the government as was indicated by the far lesser human and economic losses caused by the pandemic in Pakistan compared to the rest of the world. He said the government kept investing in two productive sectors, agriculture and industry, as well as housing during Covid-19.

He said during FY2021, growth was recorded at over 4pc compared to -0.5pc the previous year, showing a V-shaped recovery.

The minister noted that around 60pc of Pakistan’s population is below the age of 30 years. They need jobs, so the government revitalised agriculture, industry, exports and housing, he said.

However, there was a need to make sure the growth was “not overheated”, he added.

Tarin said the government was also ensuring that underprivileged people were not ignored and made to wait for the trickledown effect of positive economic growth, which has never reached them for many decades. Hence, the government had utilised bottom-up approaches to ensure sustainable and inclusive growth.

For this purpose, the government was providing interest-free loans to farmers and low-income families besides issuing health cards and giving technical trainings to help around four million households.

The minister said the premier had changed the country’s focus from geopolitics to geoeconomics to ensure the economic welfare of people. “This kind of change in focus means everything changes in terms of foreign policy, economic policy, internal security, and whatever else and relationship with neighbours.”

He said Pakistan has good relations with all neighbouring countries, but there were issues with India, which needed to be resolved.

Tarin said that there was a fundamental issue between Pakistan and India and that was Kashmir, which he said was a disputed territory as per the United Nations Security Council resolutions.

However, he said the current Indian government was not accepting its disputed nature and had taken some unilateral decisions, depriving Kashmiris of various rights.

He said that trade and economic activities between India and Pakistan were suffering, adding that PM Imran had told India so many times that if they take one step, Pakistan would take two steps and urged the Indian government to respond positively.

The minister said at the political level, there was a need to provide some space for economics and the welfare of people of both countries.

The finance minister said like all other countries, Pakistan also wanted an inclusive government in Afghanistan and was striving for that.

However, he cautioned that the Taliban were running out of cash and if the world did not come to support them on humanitarian grounds, there would be complete chaos, which would spill over to Pakistan and other countries.

He said that since the Taliban were saying that they would cooperate with the world, become a responsible country, take care of human rights, protect women rights and pledge not to promote terrorism, “we should help them step by step and encourage them to demonstrate improvements in their behaviour.”

Talking about the security situation in Pakistan, the minister said that Pakistan had fenced its border with Afghanistan, except for a small strip near Chaman while traffic flow to and from Afghanistan had been controlled and security forces were also taking necessary action to maintain security.

Tarin said Pakistan wanted to have friendly relations with every country including the US and China.

He said that Pakistan had a “major strategic partnership” with the US and its friendship with China would not affect its relations with the former.

“We believe we can work with both powers equally.”

The finance minister said that China had helped the country in building infrastructure but that did not mean that Pakistan had become China-centric.

“We are open and want to do business with China, US, Europe, Japan, Korea. We are [an] open country. There should be no misconception,” he pointed out.

Since Pakistan was not in a position to build such a vast infrastructure, China had provided funds and helped it in building roads, railways, power generation and other utilities that had generated economic activity, the finance minister said.

Responding to a question, he said that there were some projects where companies from China, the US and Pakistan were engaged in joint ventures and collaborating with each other.

“This cooperation can be enhanced,” he added.

Tarin stressed that Gwadar port was not China-centric and it was open for use to everyone including the Japanese, South Koreans and Europeans.

“Gwadar is the right place if anyone wanted to conduct business with African countries or the Central Asian states,” Tarin said, adding that Gwadar was a “big opportunity” as it was a unique territory that covered the Gulf, Central Asian republics and even the distance to China was short from the port.

The finance minister said that the government wanted to attract investment from different counties and that was why it had developed infrastructure. He added that any country could come and invest in Pakistan.

Elaborating on his point, he said Pakistan had been making efforts to attract people from different countries to invest in economic zones and was also approaching overseas Pakistanis for investment purposes.

However, he added that peace and stability in Afghanistan was needed. Tarin said that a stable Afghanistan was good for all and urged the world to help make the country manageable for everyone’s benefit.

On the remaining conditions of the Financial Action Task Force, the finance minister said Pakistan had met 26 out of 27 conditions and the 27th one was also half met.

He said that any other country in this situation would have been removed off the grey list but “Pakistan is being punished by some countries for different reasons — not economic reasons.”

“Frankly it is [the] same mantra that Pakistan is a terrorist state [and that] Pakistan encourages terrorism,” he said, adding that the country which had lost 80,000 people, suffered $150bn in economic losses and was suffering for 40 years was being continuously blamed.

Tarin said people were being probed for the flight of capital from the country.

He added that nobody would be spared and whoever had done anything wrong would have to face the consequences.

He said that the Federal Board of Revenue had constituted a committee along these lines, having 50-50 representation from public and private sectors, to move forward efficiently.

He pointed out that Pakistan had jumped 28 places in ease of doing business owing to comprehensive policy decisions.

Tarin said Prime Minister Imran Khan was himself taking charge and the Board of Investment was reporting directly to him with the premier holding two meetings every month.

The minister also said that Special Economic Zones would be made autonomous to provide a conducive environment for foreign investors. He added that autonomous status would initially be introduced in around six zones within the next 12 months and would later be replicated in other zones.

‘Govt has no job to run businesses’

Tarin said there were around 85 companies being run by the government out of which 15 were making losses of around 1pc of the GDP. These included airlines, railways, steel mills and power distribution companies.

He said that these companies would be disassociated from ministries, their control would be handed over to professional people to overhaul them and they would be privatised within five years.

The finance minister maintained that in developing countries like Pakistan, the government had “no job” running businesses.

The finance minister said that no amount of hurdles would stop the government from making Pakistan economically great again and one of the top countries in Asia and globally.

“If we make Pakistan one of the top countries economically in Asia [then] that will be an achievement — that is my motivation,” he said.