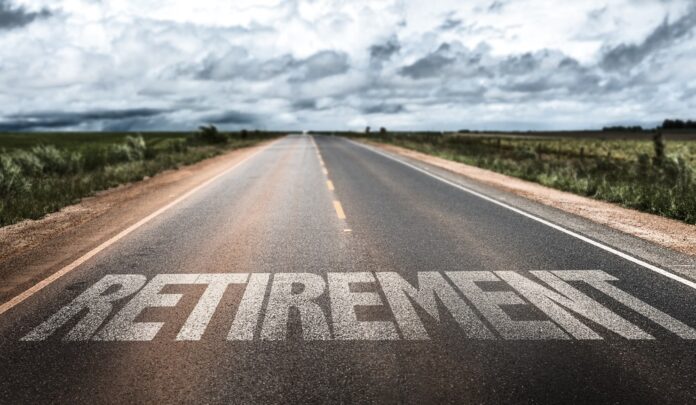 In the past year, the federal pension bill has increased from Rs 150 billion in 2020 to Rs 480 billion in 2021. Pensions in Pakistan, when most people think about them, are what you get after you retire from government service. Most private jobs do not offer pension plans in the first place, and the ones that do usually provide very basic pension plans either along the lines of a provident fund or a simple post-retirement monthly payout.

The lack of will to try out other kinds of pension plans is destructive. On a governmental level, it is projected that by 2023 the federal pension bill will rise to an alarming level of Rs 750 billion. On a private level, every year more than a million young Pakistanis enter the job market, most of whom lack clarity on how retirement benefits work, which retirement benefits they should negotiate when accepting a job offer and how they can maximise their payout at retirement.

Currently in Pakistan, three types of retirement benefits exist ranging from gratuity, provident fund to voluntary pension schemes (VPS). Each of them differ in terms of payout, how they are structured and whether they are obligatory to be paid by the employer. This is all you need to know about pension plans and retirement benefits in Pakistan.

In simple words, gratuity is strictly a cash lump sum payment made by the employer to the employee as a token of appreciation for the service they have performed for the employer. A golden handshake, popular in banking circles, for example is a kind of gratuity.

The amount of the gratuity payment to each employee, in purely legal terms, is calculated as ‘thirty days wages for every completed year of service or any period in excess of six months’. Hence, any period of employment that exceeds six months is considered one year for the purpose of calculating gratuity payments.

In numerical terms gratuity can be calculated by the following formula: Gross salary in last year of employment/26) x 30 x number of years worked in the company.

Of the three existing retirement benefit schemes, gratuity is the only benefit the payment of which is a statutory obligation on some employers. However even in the case of gratuity, this obligation does not extend to all employers nor the entitlement to receive gratuity extends to all employees. 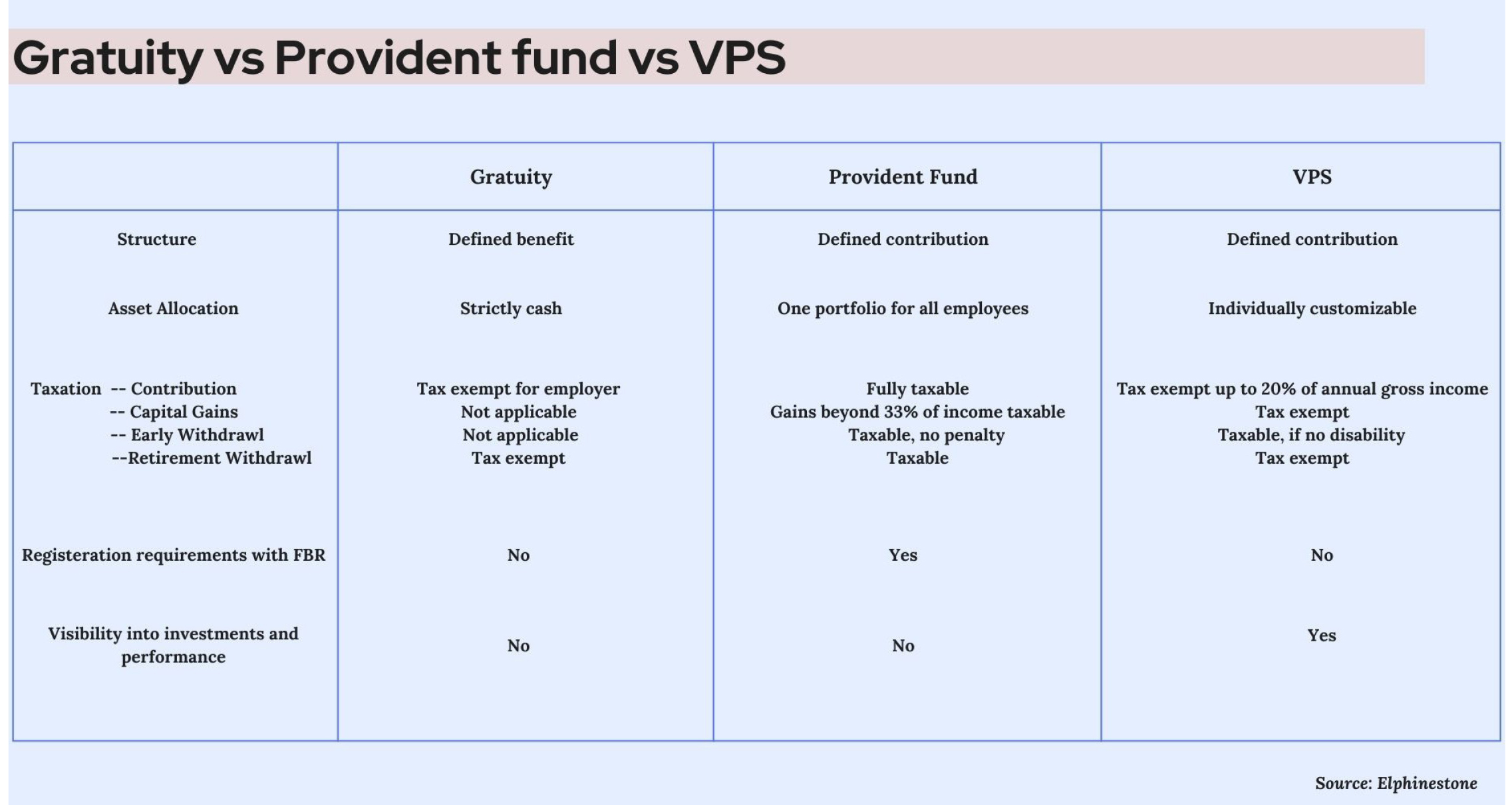 In Punjab, Sindh and Islamabad Capital Territory (ICT) the threshold is set at least 20 workers for an organisation to be required to pay gratuity to its employees. In case of industrial establishments an additional condition applies which states that at least 50 employees should have been employed by the employer on any given day within the last 12 months.

Similarly, in Balochistan and Khyber Pakhtunkhwa (KPK) the obligation to pay gratuity only applies to employers employing at least 20 workers. Again, in case of industrial establishments an additional condition applies which states that at least 21 employees should have been employed by the employer within the last 12 months.

Moreover, in cases where gratuity payments are obligatory on the employer, the employer can in theory only be relieved of this obligation if an employee is terminated for misconduct.

The law in Pakistan also allows employers to offer provident funds as a substitute for gratuity.

In terms of structure, while gratuity is a lump sum amount, provident fund on the other hand is an investment fund into which both the employee and the employer make contributions which are then invested on behalf of the employee.

However, while a provident fund lets employees invest in a fund and earn a return on it, it’s a one fit for all solution in the sense that it does not take into account individual investing preferences or risk appetites. In simpler words, everyone in the organisation invests in the same portfolio and earns the same percentage return.

Moreover, provident fund regulations also differentiate between workers (employees not involved in managerial or administrative work) and other employees. For example, workers are entitled to receive the amount present in their provident fund (including employers contributions) even in case they resign or are dismissed from work. However, in the case of other employees, since they are not entitled to receive gratuity or provident fund to begin with, provident fund trust deeds can contain certain clauses which allow employers to recover their contribution to the employees provident fund and the interest earned on it in case the employee is dismissed or leaves before the expiration of their contract for reasons other than unavoidable circumstances or illnesses.

Furthermore, from an employer’s point of view provident funds are much costlier to set up and manage compared to both gratuity and VPS. The law requires provident funds to register themselves as separate trusts with the Securities and Exchange Commission of Pakistan (SECP) and the Federal Board of Revenue (FBR), have a seperate board of directors and get a separate audit from the rest of the company. Moreover,  in case the amount invested in the fund reaches a certain threshold, provident funds are required to hire an investment advisor who usually charge a 0.5 per cent to 1 per cent of the total assets under management as their fee.

Take for example a young graduate who has just recently started their first job, and a 50 year old employee who is due to retire in 10 years. A provident fund will treat both these individuals in a similar manner with both having a similar portfolio of investments. However, in the case of VPS the young graduate who most probably has a higher risk appetite will have a portfolio with higher proportion invested in equities and other risky assets. On the other hand, the 50 years old employee will most probably have a lower risk appetite and invest in low risk assets like government bonds etc.

In terms of taxation, a VPS also has significant tax benefits over a provident fund. In case of a provident fund, contributions, withdrawal on retirement and capital gains beyond 33% of annual income are fully taxable. On the other hand in case of a VPS capital gains, withdrawal on retirement and contributions up to 20 percent of annual gross income are exempted from taxation.

However, while a VPS has significant advantages over provident funds in terms of cost, taxation, ease of set up and asset allocation, it also has some drawbacks at least for the employer. For example, since a VPS is managed and operated by an asset management company and not the employer themselves, the employers are hence unable to recover their contributions or any amount from the employees VPS account in case the employee is dismissed from the job.

Moreover, In Punjab, Balochistan and the federal capital, Voluntary Pension Schemes are recognised as a substitute for gratuity. However, such a provision does not exist in Sindh and KPK which means that in these provinces a worker who is entitled to receive gratuity can legally ask for gratuity even in cases where the employer has already set up a VPS. In order to avoid such a scenario, employers in Sindh and KPK, offering a VPS to such workers often include a clause in the employment contract waiving off their obligation to pay gratuity.

While in theory, workers (employees not involved in managerial or administrative work) are entitled to receive gratuity or a substitute in lieu of gratuity, this does not always happen.

In some instances employers have been reported to terminate employees at the end of the company’s financial year and reappoint them at the start of the next financial year. Since gratuity is a function of the number of years worked in a company, this practice of terminating and reappointing employees at year end means that the total sum paid to employees as gratuity is lower than what they would have received if paid in full at the end of their actual tenure. Even worse in other instances, employers simply do not pay gratuity even when they are legally bound to do so.

In contrast, multinational companies and big local brands are often reported to go one step ahead when it comes to complying with the laws related to retirement benefits. For example, some companies offer gratuity, provident fund and a host of other allowances to their employees who are not even legally entitled to receive gratuity.