24SEVEN onboards retailers, rebrands and digitises them for B2B services as well as last mile deliveries to consumers 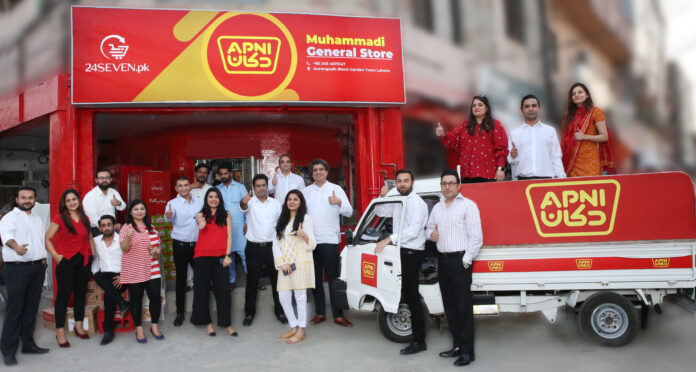 In an announcement earlier this month, Hong Kong-based Betatron Venture Group said that it funded 24SEVEN to the tune of $1 million. 24SEVEN’s pre-Series A round had been ongoing for over a year now.

In an earlier announcement from February last year, 24SEVEN announced a six-figure investment from SOSV for the same pre-Series A that they announced completing now.

Started in 2016 as an eGrocery service by Jarrar Shah, who serves as the CEO, the startup shelved grocery delivery operations and rebranded itself as 24SEVEN in early 2021 to give a new identity to its B2B2C model.

In a conversation with Profit, Jarrar said that they shelved plans for the grocery delivery business realising it could not be scaled in Pakistan. According to Jarrar’s observations, making unit economics for grocery delivery work in Pakistan was not possible.

Consequently, the startup pivoted towards onboarding retailers to fully equip them for B2B2C services on digital channels under Apni Dukan. 24SEVEN onboards mom-and-pop stores, rebrands, and digitises them as Apni Dukan resellers.

The idea has been operational for over a year now, as Jarrar tells us, with over 2,000 mom-and-pop stores onboard in five cities – Lahore, Gujranwala, Sheikhupura, Multan, and Faisalabad.

The startup further says that its GMV has been growing 40% month-on-month, with positive contribution margins.

“The communities have trust with the corner store so if we could partner with them, we could leverage the underlying trust, digitise them and brand them, instead of using dark stores, we could use them for fulfillment,” Jarrar explained the thinking behind the pivot.

The plan appears savvy. Not only does it create an impact in terms of helping micro entrepreneurs be more efficient, it can also be very scalable because of the presence of a large number of kiryana stores in low, middle, and high-income communities in Pakistan.

There are an estimated 850,000 mom-and-pop stores in Pakistan.

Jarrar says that the underlying unit economics are very strong under this model and the business is very capital efficient because there is no CAPEX burn required in setting up these brick-and-mortar stores.

These rebranded neighborhood stores will be selling 24SEVEN’s organic produce such as vegetables and fruits, as well as FMCG products which 24SEVEN will be responsible for delivering to them.

“Unlike other B2B players, our model creates a more in-depth relationship with these retailers. For instance, if there are 10 kiryana stores in a neighborhood, we will not be chasing all of them to deliver the products,” says Jarrar. “We will pick one or two of these stores and then we will take them deep into a relationship where we will rebrand them, we will be responsible for their supply chain and digital order placement – like a one-stop solution for them.”

These Apni Dukaan’s have been digitised by 24SEVEN which allows them to place orders digitally for deliveries to these stores. 24SEVEN will also be equipping these retailers with POS machines for store orders.

The plans do not stop here: after rebranding and digitisation, 24SEVEN will give the neighborhood households access to these stores for last-mile deliveries of grocery orders through an app-based service, completing the B2B2C loop.

“Further, based on the transaction history acquired through this digitisation, 24SEVEN says it will soon be able to assess the credit worthiness of these retailers in its network and disburse loans to them through partners such as Finja and HBL,” says Jarrar.

Once fully deployed, the complete suite of these services yields a profitable model for 24SEVEN, with the money coming in from product margins and other incentives, while CAPEX would be minimal because 24SEVEN would not be setting up its own brick-and-mortar stores. Further revenue would be coming in from financial services offerings.

24SEVEN’s initial focus had been on the onboarding of retailers, digitising and rebranding them, and now they are focusing on other sides of the business, such as building the fintech product which will assess the credit worthiness of Apni Dukan partners.

The proceeds from the pre-Series A round will also be used towards developing different products and features, and onboarding more kiryana stores.

Commenting on the investment, William Bao Bean, general partner at SOSV, said, “Mom and Pop stores are the building block of communities across Pakistan and 24SEVEN is enabling them to not just sell physical but to sell digital goods.”