On the 20th of October this year, two shipments were stopped at Port Qasim in Karachi. The shipments contained GMO oilseeds worth some $100 million on board. And despite the very vocal protestations of the importers that had paid for the consignments, they stayed stuck at the port pending a single certification from the ministry of climate change.

In the month and a half since the initial arrival of the first consignment, a lot has happened. More shipments of the oilseeds have arrived at Port Qasim only to be piled up with the older containers. The ensuing battle over the fate of the oilseeds has seen many different twists and turns. From a war of words that almost came to blows at a meeting of a standing committee of the national assembly to threats and warnings of soaring prices of poultry and edible oil.

The question is, what in the world is happening? Profit looks at what the oilseed shipments are, why there is so much controversy over them, how bureaucratic red-taping has unnecessarily complicated the matter, and what the effects of this delay might be on the prices of essential food commodities.

Let’s start with what is being imported. When most people hear the term oilseed, they think it is a seed that is to be sown in the ground and harvested for the production of edible oil. Oilseeds is actually a term for the seeds or ‘fruit’ that certain crops produce that are then pressed to get edible oil. One of the most widely used oilseeds globally are palm oilseeds.

In fact, palm oil is some of the most used edible oil in Pakistan and is almost entirely imported. Pakistan relies heavily on imported oilseeds to meet its caloric demands. According to a report of the central bank, Pakistan’s palm and soybean-related imports stood at US$ 4 billion in FY21, rising by 47% year-on-year, compared to compound average growth of 12.3% in the last 20 years.

These, however, are the regular shipments that Pakistan gets. Palm oil is actually used to make ‘vanaspati ghee’ which is the most used form of edible oil in Pakistan. However, the consignments that have been stuck at Port Qasim are soybeans, most of which have been imported from the United States. What is particularly unique about these oilseeds is that they are the result of Genetically Modified Organisms (GMOs). A GMO is an animal, plant, or microbe whose DNA has been altered using genetic engineering techniques. For thousands of years, humans have used breeding methods to modify organisms. Corn, cattle, and even dogs have been selectively bred over generations to have certain desired traits. 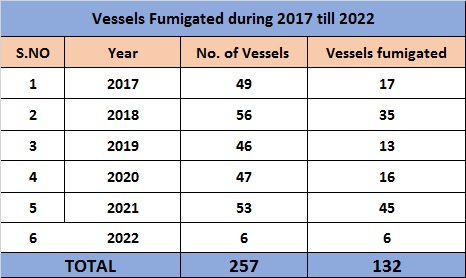 GMO oilseeds like the ones stuck at the port are resistant to weather and other climate disasters such as floods. They are also modified to provide higher yield, and to contain more oil per seed. Now, the important thing to understand here once again is that the oilseeds that are stuck at the port are already harvested and are simply imported to be pressed and converted into edible oil. In fact, the importers in this entire time have been represented by the All Pakistan Solvent Extractors’ Association (APSEA).

However, in a rather bizarre situation, since these oilseeds are termed ‘seeds’ they require certification from the ministry of climate change. That is because the climate ministry also has jurisdiction over environmental matters, and the introduction of GMOs into any country’s natural environment can have an adverse effect on its local ecology. It is something Pakistan has seen in recent years. However, as the solvent extractors have been complaining, they only mean to extract the oil from the oilseeds and not plant them. Which is why they claim it makes very little sense why they are not being allowed to access the consignments which they have already paid for, and for which they are now also having to pay for port charges.

The series of events

In early November, a reliable source in the the Plant Protection Department (DPP) of the Ministry of Food Security and Research said the shipment had been stopped over the issuance of a certificate by the ministry of climate change.

The requirement for a certificate from the climate change ministry had been introduced four years ago, and importers had applied for the certificates back then. Because GMOs and the introduction of seeds into agriculture falls under environmental protection and is a key element of the country’s biosafety, the ministry of climate change is supposed to have oversight over such imports. However, issuance of the certificates fell prey to bureaucratic red-taping and an arrangement was made on a temporary basis to continue the import of oilseeds until the certificates could be issued. This year, however, it seems the ministry has decided to finally implement the requirement.

As time went on, more shipments joined the two original shipments that had arrived on the 20th of October. According to both the importers and industry associations, the requirement has never been implemented before, and that the application has been submitted to the ministry for more than four years. “Stopping the consignment without prior notice or intimation are posting huge losses to the importers,” said a representative of the APSEA. “We are paying thousands of dollars as demurrages for the past 28 days. Neither the consignments are being released nor the certificate is being issued to resolve the issue.”

The acting Director General of DPP, Allah Ditta Abid, when contacted, claimed that the issuance of GMO was entirely a subject of the Ministry of Climate Change. The department only ensures fumigation of the consignment if the same is found infested. According to an official source, there was no policy framework for GMO certification by agricultural experts despite having proper rules and regulations to deal with the import of GM seeds.

As the shipments continued to languish, the confusion between the food security ministry and the ministry of climate change reached a crescendo near the end of November. At least six vessels containing valuable oilseeds important for Pakistan’s food security continue to be stuck at Port Qasim amid ambiguity and confusion.

It turns out the issue was created after a letter of Customs sent to the Ministry of National Food Security and Research (MoNFS&R) indicating that the imported oilseeds are genetically modified organisms (GMOs) to be cleared after due certification. An official at the Ministry of Climate Change, however, claimed that his ministry has the mandate and due process of inspecting the GMO products. Meanwhile, through a letter to MoFS&R the association has also requested for an urgent meeting to discuss this extremely crucial issue.

This meeting is where things got messy. On the 30th of November, the disagreement between the food and climate ministries took an ugly turn at a session of the national assembly’s standing committee for food security.

The meeting of the standing committee started off on the wrong foot after the minister for food security, Tariq Bashir Cheema, walked into the meeting where oilseed importers were also present. The minister took exception to this, saying that representatives of soybean importers were not welcome at a meeting of a parliamentary committee.

To this, the importers responded harshly telling Mr Cheema to leave if he was so opposed to their presence. Tempers flared and Mr Cheema lashed out at committee chair MNA Rao Ajmal, saying “It seems that the chairman of the committee has also become an advocate of soyabean importers”.

“I am going to adjourn the committee session if Mr. Cheeman doesn’t take back his words,” he warned. “I am not advocating for anyone. The poultry industry has been on the verge of destruction, and 10 of my 12 farms have closed down yet I haven’t used my position to try and influence anything. Why would I be doing this now?”

This is where things get interesting. You see, the impact of the oilseed consignment being stuck at Port Qasim is not limited to just edible oil. While oilseeds are primarily used to extract edible oil, once the oil is extracted the residue of oilseed known as oilseed cake is used as fodder for cattle and poultry. The solvent industry produces edible oil and its residue, the oilseed cake, goes into feed production for livestock.

Soybean is one of the most productive forms of oilseed cakes used as fodder for livestock. With as much as 300,000 tonnes stuck at Port Qasim, there may be a larger significance of this stoppage on some of the most basic food commodities in the country.

A statement from the Hyderabad Chamber of Commerce and Industry (HCCI) President Adeel Ahmed Siddiqui during this entire saga actually warned that the government’s reluctance to allow clearance of imported soybean oilseed at the port may trigger shortage and price hike of edible oil, chicken and milk prices.