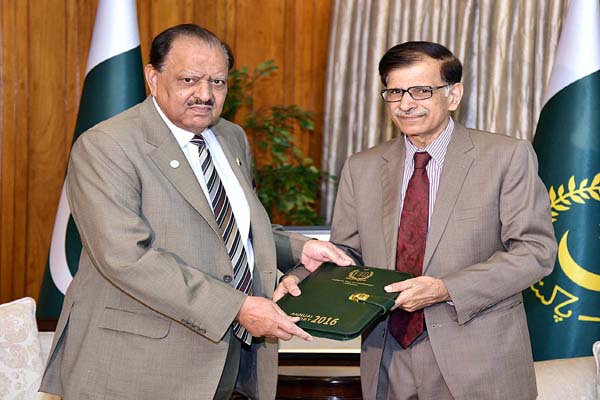 The President Mamnoon Hussain on Thursday urged an effective strategy to resolve tax related issues of the people and asked the Federal Tax Ombudsman (FTO) to benefit from the experiences of other countries in this regard.

He was talking to Federal Tax Ombudsman (FTO) Abdur Rauf Chaudhry who submitted him the Annual Report-2016 here at the Aiwan-e-Sadr, a statement said. The president expressed satisfaction over the report and appreciated various initiatives taken by the FTO to improve the performance of the institution.

He said the FTO plays a positive role in increasing national revenue by building taxpayers confidence and by addressing systemic issues. He commended the role and performance of the FTO in addressing the grievances of the tax payers since its establishment in year 2000. The president said relief in tax refund should be provided to small business enterprises to enable them contribute in country’s development. He stressed strict implementation of tax laws to discourage tax evasion and appreciated timely resolution of problems with average disposal been reduced to 49 days from 63 days in 2015.

He also expressed satisfaction on restructuring of consultative committee of the FTO and on complete operationalization of regional offices of FTO in Faisalabad, Multan, Sukkur and Abbotabad. The president hoped that the FTO Secretariat would continue efforts to serve the people by further improving performance.