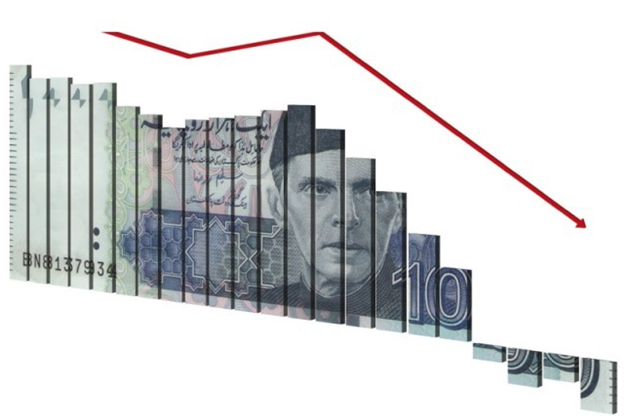 The dearth of economic accountability and transparency in Pakistan means that the size of the parallel economy is now estimated to be one-third of the total GDP. According to the study “The Size of Informal Economy in Pakistan” published by State Bank of Pakistan, an exorbitant, Rs. 850-900 billion are untaxed. Besides, a loss of Rs. 1300 billion is incurred from illegal trade as specified in the book, Pakistan: Enigma of Taxation.

The Pakistani economy is plagued with a lot of problems, ranging from, smuggling of goods and narcotics, rent-seeking, human trafficking, informal employment and child labour.

In a 2011 report published by the Sustainable Development Policy Institute (SDPI) in conjunction with the United Nations Office on Drugs and Crime (UNODC), Pakistan may have lost almost a decade of growth due to poor competitiveness in the domestic market and a high exodus of skilled professionals.

Rampant corruption in the country pervasive at all echelons of power has retarded the efficient allocation of resources.  Those at the top tiers of power are occasionally implicated in the worst corruption cases. Money laundering has flourished under the guise of economic schemes specifically, section 5 and 9 in the Protection of Economic Reforms Act of 1992 and Section 111(4) of the Income Tax Ordinance, 2001. Pakistan’s Anti-Money Laundering Act has been largely ineffective in stemming the flow of black money.

According to a 2016 International Monetary Fund (IMF) report, more than 60% of the Pakistani labour comes from the black economy with little to no protections. A 2015 study by the International Labor Organization (ILO) estimates that about 5.7 million children between the ages of 10 to 17 usually work under hazardous conditions. Moreover, 1.13% of the total population and more than 2 million people live in conditions of slavery as per the Global Slavery Index, 2016.

The only requirement generally stipulated for conducting business in the Pakistani real estate sector is the provision of their ID card without the documentation of tax records. Furthermore, conditions mandated for purchases to be carried through the formal banking, they are generally circumvented.

Therefore, there is a substantial flow of funds especially remittances from overseas Pakistanis into the domestic property market often leading to ‘real estate bubbles’, causing an upward spiral in property prices. Since these prices don’t correspond to the average buying power. This compels residents of metropolitan areas like Lahore, Karachi and Rawalpindi to seek affordable housing often far from the city’s centre.

According to SDPI and UNODC’s ‘Examining the dimentions, scale and dynamics of illegal economy’ report,  “The incessant smuggling of goods into Pakistan via Arms Trade Treaty is valued at US$ 5 billion and represents a loss of US $2.5 billion to the Treasury.”

The manufacturing sector and retail sectors with a valuation of US $ 197 billion in 2011 and comprising 18% of the economy are stagnant. Domestic products can’t compete with low priced smuggled goods causing huge losses to the national exchequer. The inordinate growth rates of the informal goods and services sectors far outstrip that of the formal economy in all the provinces except Punjab. It’s extraordinary role in the economy can be inferred from the fact that it stands at 5.06% in KP, 6.85% in Balochistan, 4.10% in Sindh and 2.43% in Punjab and 3.24% in Pakistan, according to report Growth of Provincial Economies, 2015.

According to UN drug report, Afghanistan produces 70% of illicit drugs with 42 to 43% are trafficked through Pakistan, and the country is at risk of becoming a narcotics consuming country from merely being a transit route. Drug trafficker and addicts constitute at least 9% and 4.3% of the population burdening the economy because of the cost of treatment and recuperation as well as the criminal justice system.

Trafficking victims face insurmountable difficulties as they are often forced into bonded labour or prostitution and work in precarious and dangerous conditions. Quite a few die en route with their families being unlikely to seek justice.

Criminals in Pakistan often direct to reinvest their illicit funds in both legitimate and illegitimate business ventures, thereby crowding out the legal sectors of Pakistan’s documented economy.

Despite the multitude of problems plaguing the economy of Pakistan, there exists a huge potential for the federal and provincial government and other stakeholders to adopt an expansive array of strategies to dampen the illegal economy.

Pakistan should co-operate with its neighbours, particularly Afghanistan and Iran, and other Central Asian and South Asian countries which serve as the major transit routes. The government can enter into regional accords or agreement to better deal with the menace of the black market to address the legislative and regulatory activities regarding mutual legal assistance and extradition.  This will help bolster the inter-regional connectivity of security forces. The legal and moral rights of Pakistanis who are convicted of engaging in illicit activities in foreign lands need to be ensured.

In this context, to see tangible progress, Pakistan needs to deploy more security forces to far-flung border areas of Balochistan, KP and the Federally Administered Tribal Areas (FATA). To undermine the trafficking and smuggling networks, the residents of FATA should be accorded greater political, economic and social rights to discourage participation in illicit activities.

Governmental bodies, NGOs and civil society can conduct social campaigns through print and electronic media and seminars and workshops raise awareness about human and drug trafficking. This can markedly decrease the number of illicit activities by bringing about a radical change in attitudes and behaviours.

The government of Pakistan should bolster efforts to reintegrate drug traffickers into mainstream society as well as re-integrating child labourers in the education system.

The federal government can further devolve powers to the provinces, which in turn can play a proactive role in strengthening the district judicial and legislative authorities to build a respect for the rule of law in society. Capacity building should be prioritised and checks and balances institutionalised to necessitate horizontal and vertical integration across a plethora of legal, administrative and executive organisations.

International institutions like the ILO can help oversee the implementation of relevant laws in Pakistan. The process of tackling smuggling and trafficking is expected to be greatly facilitated by the UNODC’s Country Programme II formulated in collaboration with the National Narcotics Division, is “based on principles of national ownership, upstream policy and human rights based approach”. Preexisting laws like the Foreign Exchange Regulation Act, 1947 can be strictly implemented to halt the transfer of criminal proceeds and financing terrorism.

The federal ministry of commerce can introduce a series of reform packages to boost competitiveness in the domestic market so that manufacturing and retail producers (domestic and foreign) can be incentivized produce due to the low costs. Besides, the ministry of planning, development and reform in collaboration with the ministries of health and education can roll out reforms in the health care and education sectors so as to stem the flow of economic migrants from the country.

The Federal Board of Revenue (FBR) can seek to increase the tax net to include a greater number of individuals and the federal government can mandate a progressive taxation system for citizens so as to lead to sustainable growth and development. Making the possession of tax records mandatory for property transactions can dramatically augment the collection of property taxes, thereby bursting real estate bubbles and halt crowding out of the formal economy.

Furthermore, the government should create greater employment opportunities. Menial workers, particularly those in rural areas and living below the poverty line should have a sustainable and sufficient income.  Not only would this help in raising the living standards of the average Pakistani but also decrease the tendency of the economically deprived groups to commit crimes.