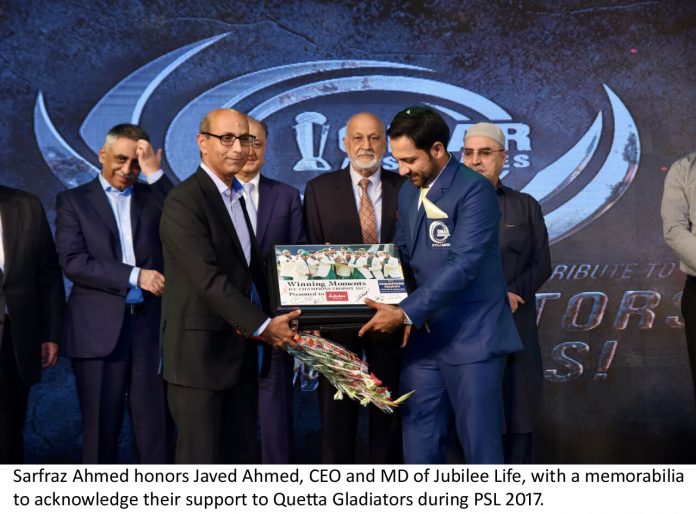 Pakistan’s victory at the ICC Champions Trophy 2017 has been the most talked about event for the country this year and rightly so. The team that ranked world’s eighth, fought valiantly against some of the world’s strongest teams and came out victorious in what was an incredible display of perseverance, focus and sheer resolution.

The gala ceremony – intended to commend the spirit of the triumphant players and the team – was tagged “HEROES.VICTORS.CHAMPIONS!”, where Sindh Governor Muhammad Zubair was the chief guest and squash legend Jahangir Khan as well as a number of former Pakistani cricketers attended the event.

The ceremony was hosted by Dr Noman Niaz and Sidra Iqbal, while former cricketers Rashid Latif, Shoaib Ahmed, Tauseef Ahmed were also present at the event.

The 40-year-old former Pakistani cricket captain Younis Khan was honoured for his overall outstanding performance and was decorated with a gold medal and a cash reward for his praiseworthy services for cricket.

Speaking to the audience, Javed Ahmed said, “I would like to appreciate Sarfraz Ahmed and team for their marvellous victory in ICC Champions trophy. Sarfraz showed his winning spirit and extraordinary leadership for leading the team to victory in the Champions trophy. I would like to wish a very good luck to our cricket team in all formats of cricket in the future and bring glory to Pakistan.”

Jubilee Insurance is a global brand of Aga Khan Fund for Economic Development (AKFED) that offers diverse insurance solutions (life, health and general) in the Asian and East African markets.

Zaki Abbas
The writer is a member of the staff. He can be reached at [email protected]