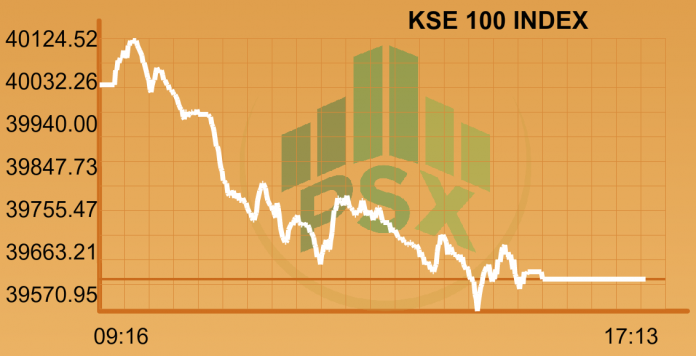 LAHORE: The misery for investors of the Pakistan Stock Exchange (PSX) gets worse with every passing day. The downfall which started post up-gradation to the MSCI Emerging Market index has completed six months. The benchmark KSE 100 index which touched its peak of 53,127.24 on May 25 has since then depreciated by 25 per cent, considering Tuesday’s close.

Trading remained dull, albeit volumes inched up 2 per cent a day on day basis while value increased 26 per cent. KEL (-2.1 per cent) made up 25 per cent of Tuesday’s turnover.

KSE 100 index continued to slide, falling 398.04 points or 1.0 per cent to 39,634.13, given limited support due to the prevailing political and economic situation in the country. Participants opted to square positions ahead of the upcoming MSCI rebalancing at the close of Thursday, November 30. Further, the resurgence of SECP’s investigation into leakage of trading data also dampened moods.

The market volumes struck 113.00 million with K-Electric Limited (KEL -1.76 per cent) at the top again. Over 27.88 million shares were exchanged in the script. TRG Pakistan Limited (TRG -4.47 per cent) followed just like in the previous session with 9.21 million shares traded. But unlike the last session where TRG touched its upper circuit breaker, it shed 3.40 per cent.

Activity was seen in ENGRO (+1.6 per cent) as the budding energy conglomerate signed a pact for another LNG terminal while participants were busy trying to preempt trading ‘calendars’ for ENGRO’s upcoming ejection from MSCI Emerging Markets Index.

Azgard Nine Limited (ANL -0.80 per cent) declared financials for the first quarter of the ongoing financial year. The script has been able to add 67 per cent to its account in the last one year even in the declining market. The management announced earnings per share of Rs 0.03 against a per-share loss of Rs 0.37 in the same period last year.

As expected, most sectors cumulatively narrowed their market capitalizations. None of the oil scripts from both the oil and gas exploration sector and the oil and gas marketing sector managed to gain anything. The sectors chopped off 1.97 per cent and 1.87 per cent respectively from their market cap. The second largest sector on board, commercial banks, also laid off 0.10 per cent though MCB Bank Limited (MCB +0.04 per cent) and United Bank Limited (UBL +1.20 per cent) added a little positive to its bag.

As per Bloomberg reports, Pakistan is all set to sell up to $ 3 billion of dollar debt. Pakistan started a roadshow on November 22 for dollar bonds with the pricing of the bonds expected to be announced on November 29.

Meanwhile, Pakistan Stock Market’s ETF is expected to be launched in China next year. China consortium is working to introduce derivative products after the acquisition, China Financial Futures Exchange Director You Hang told at a conference in Karachi.