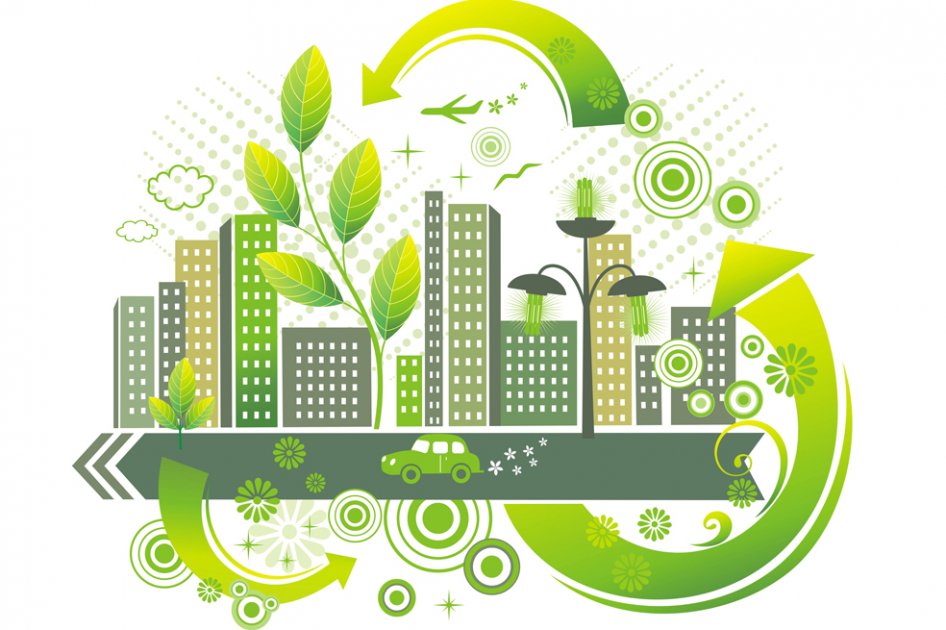 Either hot or very cold, mostly in the extreme, the weather is hardly ever temperate. One’s neighbourhood is hit by water scarcity, the power load-shedding is a permanent nuisance, exacerbated by inflated electricity bills. In this disturbing milieu, the Pakistan Green Building Council (PGBC) has introduced by some newfangled environment-friendly products to alleviate ones misery.

A subsidiary of the World Green Building Council, its Pakistan chapter is making an endeavor to familiarise us with eco-friendly building materials in the country.

In 2014, a severe heat wave with 48 Celsius temperature struck Karachi and took a death toll ranging between 1,500 to 2,000 people due to dehydration. The conventional house-building materials definitely had an add-on impact on the severity of the environment.

Having galloped apace to end the electricity shortfall, the Pakistan government in the last five years has gone after coal hammer and tongs, which is likely to further unbalance an already hugely skewed situation environmentally. That makes following the worldwide phenomenon and going green all the more imperative.

All countries are taking steps to ameliorate environmental degradation and promote green inputs and industries, albeit to varying degrees. The developed nations in particular are taking green construction seriously to reduce the burden on environment.

“From just one house in 2012 built based on eco-friendly rules, we now have around 12 million square feet area under green construction,” said Aqrab Ali Rana, the PGBC CEO.

The PGBC has launched a Pakistan-specific reference guide of green building design and construction. Having followed the specified standards, factories can get a certificate confirming their environment-friendly status.

Exporters with green buildings are paid a rebate as reward; for instance, if a company is paid one dollar as subsidy on a pair of trousers when it sells 40,000 pairs, it can pick up a reward of $40,000 each month. That though is not the case in Pakistan.

“Back in 2011 and 12, there was rebate on duty on the import of solar equipment like panels etc., but then the present government withdrew that,” Rana said.

The government-affiliated National Energy Efficiency Conservation Authority (NEECA), has even prepared a Pakistan Energy Provision 2011 but it remains unimplemented.

The PGBC guidebook is basically an assessment system to grade buildings, which are billed as green. “There are many, who only install LED lights and call their building green. But it doesn’t make them qualify as one. For this, there is a multi-level checklist. We have named the book ‘Sustainability in Energy and Environmental Development (SEED)’. It can help owners and builders to understand how green construction goals –  being energy-efficient and environment-friendly can be accomplished.”

The Green Guideline has four certification levels, depending upon the thresholds achieved. The silver grade, the lowest denominator, is granted at obtaining points between 40-49, the gold 50-59 at points, platinum 60-69 points, and the top one titanium at 70 and above points.

According to Rana, Punjab and KPK are spearheading the race in green construction in the country.

“In several projects, private stakeholders have taken the ‘go green’ initiative. Several entities in Punjab and elsewhere, like DHA City, Karachi near Bahria Town, have adopted it by making rules on their own by incentivising future residents if they opt for green materials. For its part, KPK government has has been taking some initiatives to turn some of their government offices and new structures into green buildings.”

The PGBC has been in contact with State Bank of Pakistan since 2012-13 and finally it has now a couple of months back disseminated guidelines to 34 banks.

“Gradually individuals and organizations have starting taking green construction seriously and I am hopeful our efforts would be fruitful for the country. We started PGBC in 2009 and the issue is only now being taken seriously,” he said.

According to businesswire.com, aluminum’s importance is on the rise due to the use of secondary extrusions, to the extent that demand for green construction is said to be its primary reason. The projected compound annual growth (CAGR) of aluminum globally is said to be 3.43% for 2018-22.

Green building concept is meant to reduce load on environment and to make the world a better place for future generations. The emerging idea is of zero energy building –  the kind that generates its own to meet its needs.

IPM means to bring all stakeholders – consumer, builder/contractor, architect/engineer and vendor – under one umbrella to participate together in construction of a building to minimize, if not eliminate, chances of mistake.

“You must have heard complaints from consumers that this building maybe great but it is not for us, with the builders riposte being why didn’t you tell us in advance. IMP will help in these issues not coming to pass,” said Nisar Mohyuddin, general manager technical of Diamond Jumbolon.

The location of a project should be selected while keeping in view the availability of public transport. We are seeing projects which are quite distant, compelling people to use their personal transportation which is not a good idea for roads, traffic and environment. The buildings should be located from where people could go to markets and offices on foot or bicycle,” said Mohyuddin.

Meanwhile, playgrounds and other recreation activity areas should not be used. Playgrounds help a society stay healthy. Activities in playgrounds also help children develop imagination power to solve problem which is crucial for nations to progress.

An important part of green construction, the buildings should be equipped with water efficient apparatus and water that is used should be recycled.

Build Pro has introduced a flush system which uses 2.6 to 3.5 liter per flush, reducing water consumption by 40 to 50 percent, by using water-efficient siphon system instead of ‘L’ shaped tubes to drain wastage from toilet.

Siphon mean the ‘S’ Shape system in toilet when water goes through the S shape tube it creates pressure due to a rather long way and sucks all what the toilet contains with relatively less water.

When we talk about water, water filtration system is now essential for every household; 3C-Fibre has introduced water filter cartridges made by yarn having double the life than the normal foam ones.

Building scientists have introduced instruments which will make building energy optimized. Different companies have introduced temperature reducing walls, bricks, roofs and green grass which can be grown on roofs and inside rooms with less light.

Companies are offering glasses which let the light go into building and stop the heat coming with it. It helps save energy as you will not have to use AC on low temperature. For example, glazing skylights can be used instead of using electric bulbs.

Energy can also be saved by reducing heat absorbed by roofs with twin wall PVC Corrugated Sheets, which are a kind of plastic roofing sheets. They are a better substitute of roof sheets made by steel, asbestos or fiberglass. They are colorful and can last long, even more than 10 years.

The PVC Corrugated Sheets are especially suitable for properties in coastal areas, animal confinement buildings and places where heavy chemicals are stored.

“These are noise, electricity insulation and temperature and fire resistant, and 120 centimeter to 150 centimeter roofing sheet can carry 150 kilogram load,” said Javed Khan, an Executive at Gilani Traders.

By using optimised paints, house temperature can be reduced by up to 5 centigrade.

A Karachi-based company 3C-Fibre has introduced a low-cost building material, a substitute for cement, which can save Rs150 per bag. It is made with stone from Baluchistan.

“Polypropylene Fiber, a kind of plastic which reduces the maintenance cost by including 300 gram per bag in cement during construction,” said Mohammad Mohsin Sheikh, a sales coordinator at 3C.

Our existing  air conditioners are not carrying ventilation system, which means we are living in cold but not airy rooms. These ACs do not provide fresh oxygen, which is a health hazard, besides being a burden on bills of electricity as well.

IEQ means making an optimized ventilation system, which not only provide oxygen but also keep a building relatively cool without air condition machines. Energy consumption can also be reduced by using occupancy sensors, which automate lighting of the room – when a person leaves room the sensors will turn the lights off automatically.

Bamboo flooring has also been used as a part of green construction as it keeps the  temperature of the room low. It is a high renewable resource as it is manufactured from bamboo plant. Wall insulation also reduces room temperature to around six to eight percent. There are insulated panels in the market, which can be used on walls. They are thermal-resistant, temperature-controlling, firesafe and removable.

Our real estate needs to innovate; the good news is that companies from all over the world are ready to bring over innovative products.

“After looking at the potential of eco-friendly construction material over here, our company is going to establish its production plant of insulation material in Pakistan in 2020,” said Noman Mehmood, assistant general manager at Kingspan, a major producers of cold store and pharmacy panels.

Another Kazakhstan-based company Coldoff, decided to come to this country after they got huge organic traffic from Pakistan on their web portal. The company provides insulation spray foam which can be used on metal, bricks, concrete and wood in order to reduce room temperature.

“We had no plans to come to Pakistan due to financial and security issues but when we observed that most visitors on our websites were from Pakistan, China and India, we decided to come here too,” said Zubair Khan, a Coldoff company representative.

The green construction in itself has an allure: improving ones living standard, conserving energy and water. Self-interest ahead of altruistic motives would provide the spur only if people are convinced of it being financially viable.

“Going for green or energy-efficient building means considerable higher expense, for new technology and advanced materials have to be used. Then many appliances have to be automated, with the use of sensors and softwares, and vacant space has to be left around the infrastructure. Despite all this, ABAD (Association of Builders and Developers) has been keen to embark on the venture,” said former ABAD senior vice-chairman Hasan Bakhshi while talking to Profit.

Bakhshi maintains that K-Electric is the main hurdle in the way of eco-friendly construction. “K-Electric has been using valuation of load of a building on a model established in 1960 – when appliances consumed more energy compared to now when all appliances like air conditioners, refrigerators, irons etc. are far more energy efficient. The KE does not change its model because for energising a building on old formula is four times more expensive, and definite loss of considerable revenue stops them from switching to a new model. But who would want to invest far more to remain in a considerably disadvantageous position vis-a-vis billing ?”, said Bakhshi.

According to Bakhshi, the government also has to step in to encourage green construction as this could also prove to be the key for Pakistan’s power woes.

“I think through green construction, we can reduce 60% of our electricity consumption. But it also means a huge reduction in K-Electric’s collection,” he said.

“But K-Electric needs to think that with domestic consumption reduced, it could boost our economy as a whole when the surplus power is directed towards the industries. We can produce more, import less and export more,” Bakhshi added.

If this comes to pass, as Bakhshi says, then the present trade deficit and the subsequent pressure on foreign exchange reserves could also be taken care of.

Show us the plan: Investors push companies to come clean on climate