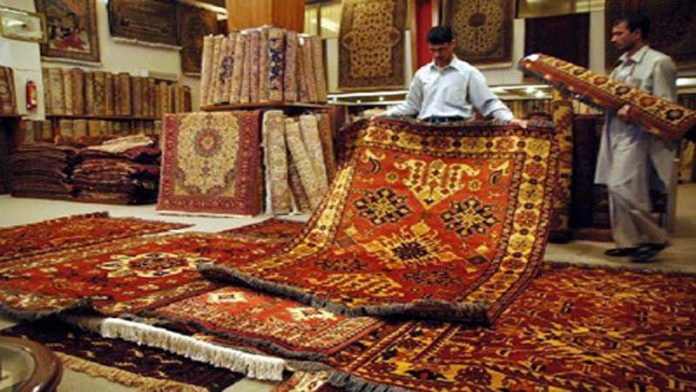 LAHORE: The Pakistan Carpet Manufacturers and Exporters Association (PCMEA) has urged the government to direct the Commercial Attaches abroad to facilitate the export of Pakistani products in international market through their official network.

The appeal was made by  Pakistan Carpet Manufacturers and Exporters Association chairman Latif Malik while talking to office bearers of the association here on Sunday.

He informed that a three-day 36th International Carpet Exhibition will be held in Lahore from October 04, 2018.

The chairman PCMEA said that the annual exhibition provides an opportunity to showcase the best of Pakistan’s carpets to visitors and customers from around the world.

He said that PCMEA has invited major countries of the world to participate in the event. Presently, Pakistan-made hand knotted woollen carpets in Bokhara, Chobi, Jaldar, Balochi, Sootri, Persian and Kazakh designs are gaining the attention of customers the world over for their high quality and unmatchable prices.

“It is a matter of great pride for Pakistani manufacturers and exporters of hand-knotted carpets that in all corners of the world there are very satisfied customers having trust and confidence in quality and workmanship,” he said and added that Pakistani carpets are among the top carpets in the world.

The chairman said that Pakistani carpet manufacturers are working hard to enhance its demand in the international market. He said that due to the hard work of PCMEA, soft image of the country is being improved day by day.

He said that the Trade Development Authority of Pakistan (TDAP) has provided Rs5 million funds for holding the exhibition and thanked the TDAP for the meagerprovision of funds. However, he said that the amount ismeagreto meet the expenses.

Malik has also urged the TDAP to increase the funds for holding the October exhibition a success.

He said that the PCMEA is trying hard to make the exhibition most successful with the participation of international visitors.

The chairman PCMEA said that the Association has invited the major countries of the world to participate in the event. He said that Pakistani carpets are among the top carpets in the world.

He said that major countries of the world including the South Asian Association for Regional Cooperation (SAARC) member states are also scheduled to participate in the exhibition. He hoped that due to the positive impact, the exhibition will help Pakistan in enhancing its exports abroad. He urged the government to fully support the forthcoming exhibition.

Secretary Trade Development Authority has promised to remove all the hurdles in arranging the International Carpet Exhibition and official patronage during the exhibition.

The 36th International Carpet Exhibition will be started on October 4 and will be concluded on 6 October 2018, the association said.