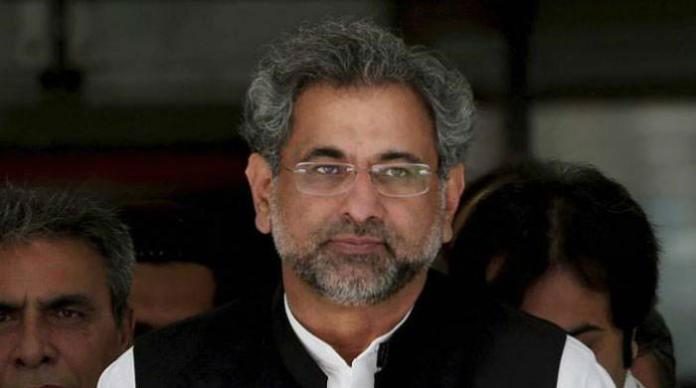 ISLAMABAD: Former Prime Minister Shahid Khaqqan Abbasi is allegedly involved in the award of a $280 million worth contract for the 427km long Machike-Tarru Jabba oil pipeline to a Chinese company led consortium in violation of the OGRA Ordinance, it has been reliably learnt.

Sources in the petroleum division disclosed to Pakistan Today that the ex-premier Abbasi while being the chairman of the Economic Coordination Committee (ECC) of the federal cabinet has allegedly played a role in the award of $280 million worth 427km long Machike-Tarru Jabba oil pipeline project (MTOPP) to a Chinese company led consortium.

They said ISGS fulfilled the task assigned by former PM for the oil pipeline project (MTOPP) with the approval of ECC. They said, PM Abbasi while misusing the chairmanship of the ECC allegedly tried to ignore the Frontier Works Organisation (FWO) in the award, although it (Frontier Works Organization) had been pursuing Machike-Tarru Jabba white oil pipeline since 2015. Similarly, despite the opposition of OGRA and petroleum division, tenders were called by Inter State Gas System (ISGS) and the bid and the tariff of the Chinese company led consortium was accepted on a single bid received against the tender. The award of the contract for laying the pipeline for transportation of petrol and high-speed diesel (HSD) by ISGS is against the Oil and Gas Regulatory Authority (OGRA) Ordinance. The violation of OGRA Ordinance was committed in the award of contract for the transportation of petrol and diesel from Sheikhopura to Nowshera (Machike-Tarru Jabba) through the oil pipeline, said the source.

The source also informed that though the former PM allegedly pressurised the secretary petroleum division Raja Sultan Sikandar and other officials for getting the approval, secretary petroleum has refused to submit his signature on the agreement apparently owing to violation of OGRA Ordinance, deficiencies in the contract, favour to Chinese company led consortium and fear of heavy loss to national exchequer.

An official at Energy Ministry on condition of anonymity, told that the energy ministry was mulling to forward the matter of award of oil pipeline contract in violation of rules and OGRA Ordinance to National Accountability Bureau (NAB) for investigation.

An available copy of documents reveals that award of the contract to the consortium of China Energy Construction International Corporation, Jerah Oil and Gas Engineering Corporation and Techno Engineering Services (Pvt) Ltd (collectively CJT (Private) Limited) was against the OGRA Ordinance and rules. Similarly, the FWO project was without a sovereign guarantee and on a commercial basis while the federal government will provide a sovereign guarantee and other facilities to Chinese company led consortium.

Likewise, the tariff of Chinese company led consortium for transportation of petrol and diesel (HSD) was equivalent to the rate of oil tanker while tariff of FWO was 40 per cent less to the oil tanker if compare and it will provide Rs10 billion worth annual benefit to the consumers of petroleum products and the national exchequer.

Frontier Works Organization (FWO) has been pursuing Machike-Tarru Jabba white oil pipeline since 2015 with an active participation of OGRA, Ministry of petroleum and natural resources, oil marketing companies and Oil Companies Advisory Committee. FWO presented a concept note on this project (MTOPP) in February 2016. Subsequently, a task force was constituted to asses economic viability and throughput requirements of the pipeline proposed by FWO. Minister for Petroleum and Natural Resources  on the recommendations of task force held a meeting on 25 May 2017 and a decision taken that ministry agrees in principle to the proposal of FWO for construction of pipeline infrastructure and storages and new jetty at Port Qasim.

Although ISGS was never a part of these deliberations held during the development of the FWO project, however, they were favoured by the then petroleum minister Shahid Khaqqan Abbasi  as the meeting held on 25 May 2017 took a decision that petroleum ministry will take initiative for construction of an oil pipeline from Machike to Tarru Jabba in three different segments by floating open competitive tenders.

It is relevant to mention here that ECC in its meeting held in April 2018 has declared in its decision pertaining to the construction of Machike-Tarru Jabba oil pipeline that all future pipeline project will require the approval of the cabinet while this decision will not be applicable on FWO project as it was a project earlier to ISGS project.

Additionally, the decision of ECC was contrary to clause 7 of the OGRA Ordinance 00 which states that the Authority (OGRA) shall determine or approve tariff for regulated activities and the criteria for determination, approval, modification and revision of tariff shall be prescribed in the rules and the criteria shall include provision for the protection of users of regulated activities and consumers against monopolistic or oligopolistic pricing.

Moreover, the same rule states at Rule 21 of OGRA Ordinance that the federal government may issue policy guidelines to the Authority which are not inconsistent with the provision of OGRA Ordinance and the rules. However, ECC decision dated 17 April 2018 in favour of ISGS was a continuity of an earlier decision of ECC regarding approval for the project of ISGS on the provision of throughput guarantee by Government of Pakistan. Furthermore, Rule 25 of the Pakistan Oil (Refining, Blending, Transportation, Storage and Marketing) Rules, 2016 states criteria for grant of a license to ISGS requiring ISGS to obtain an undertaking from the user of the pipeline to the effect that the pipeline shall be operated on a commercial basis and throughput guarantee. And, ISGS did not have any through put guarantee in place.

Besides, after getting a favourable decision from ECC, ISGS selected its contractor based on a single bid received against tender. The quoted transportation tariff available on ISGS’s website is without right of way cost and without line fill cost. The tariffs available for Machike-Chakpirana section as Rs649.65 per million ton, Chakpirana-Rawat section as Rs652.21/MT and for Rawat-Tarru Jabba section as Rs916.80/MT.