Summit Bank to be merged with Sindh Bank by August 31 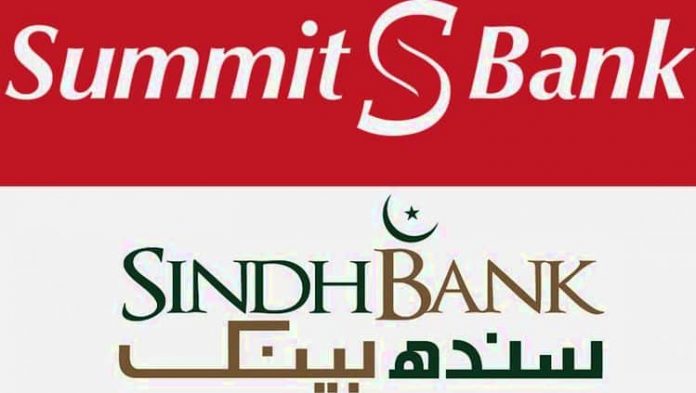 KARACHI: The board meeting of the Summit Bank has finally decided to merge with the Sindh Bank after a final meeting with the shareholders to be held on August 31, said its President and Chief Executive Officer (CEO) Ahsan Raza Durrani here on Thursday.

The bank has decided the merger in a meeting held on August 3. The ratio of the share, which has been decided in the last meeting, would be 8.37 share of the Summit Bank to be equal of one share of Sindh Bank.

Summit Bank’s CEO in a selected gathering of journalists said, “We are happy with this merger as the total branch network of the bank would exceed to 525 with a paid-up capital of Rs27 billion.” Sindh Bank had also approved this merger in an earlier meeting and after share-holders’ meeting of Summit Bank the matter would be placed before the Supreme Court of Pakistan (SCP) for final approval, he claimed.

Bilal Shaikh, one of the founder member and former CEO of Sindh Bank said, “After merging Summit Bank with the Sindh Bank, the Sindh government may further enhance its investment of Rs10 billion in the bank.”

He said the Supreme Court has never opposed the merger of these banks, but it asked us the reason behind the merger. He said, “We replied to the SCP that after this merger, Sindh Bank will be listed on the Stock Market, we will have over 500 branches network and will have other businesses like import and exports with Summit Bank.”

He further stated that after completing the necessary regulatory work, “we will have to take the final approval from the Supreme Court and we will get it before September 30. The merger process would be completed by the end of 2018 and we will also issue Initial Public Offer (IPO) of the Sindh Bank before the end of 2018″.

The merger process of both the banks had initiated in 2016 but was halted in 2017.

Rejecting the baseless rumours regarding the Summit Bank’s closure, President and CEO Ahsan Raza Durrani said that the State Bank of Pakistan (SBP) and our bank have rejected all the rumours and we will save our account holders, shareholders, depositors and their investment in the bank.

He said the National Clearing Company of Pakistan Ltd (NCCPL) had issued its clarification through another letter dated August 8, 2018 and according to this letter it has been clarified that the said notice has no effect on normal operations of the bank.

“Summit Bank is determined to provide its best services to the depositors,” he added.

Moreover, the National Institutional Facilitation Technologies (NIFT) had also issued its clarification letter dated August 8 on false, misleading and baseless rumours circulating in the market through social media and the same is updated on Summit Bank’s website for the awareness and satisfaction of the valued customers. We are also going to take serious legal action against the culprit via the Cyber Crime Act.

He further claimed that the Bank is fully discharging its liabilities towards its depositors and other stakeholders through a clearing mechanism of NIFT (Cheques, Pay Orders, Demand Draft etc) and there is no stoppage or difficulty as clarified in the enclosed letter of State Bank of Pakistan (SBP).

Money Laundering issue: Over the issue of money-laundering, the CEO of Summit Bank said the bank has no affiliation with any political group and is not involved in any money laundering. All allegations are baseless, he claimed.

He said that the bank is cooperating with the Federal Investigation Agency (FIA) and other agencies investigating the cases of 27 accounts in which Hussain Lawai and others were arrested. The case of money laundering would not affect the merger of this bank with Sindh Bank, he claimed. The CEO, however, avoided comments on the details of the investigation.