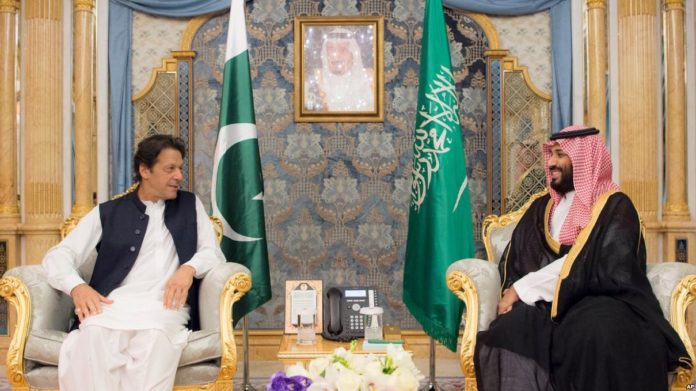 Prime Minister Imran Khan secured financial pledges from China during a four-day official visit to China, where he met with leaders, including President Xi Jinping.

Chinese and Pakistan officials have not given details, but they say China plans to provide an unspecified financial “grant” to Pakistan.

Among other financial dealings, Khan also secured more than $6 billion in financial support from Saudi Arabia during a September visit there. And the United Arab Emirates is reportedly considering Islamabad’s request for up to $6 billion.

Many experts, however, said taking financial assistance from the Saudis and UAE might require a diplomatic or strategic payback.

“It’s unlikely a $6 billion gift would come with no strings attached,” said Michael Kugelman, deputy director of the Asia Program at the US-based Wilson Centre. “I imagine in all likelihood Islamabad had to reassert its allegiance to KSA with the implication that Pakistan should back away from the Imran Khan government’s strong assertion of neutrality in the Iran-Saudi Arabia rivalry.”

Husain Haqqani, Pakistan’s former ambassador to the US and director for South and Central Asia at the Washington-based Hudson Institute, echoed Kugelman’s assessment.

“Saudi Arabia is also unwilling to continue giving cash first and making requests later, something it has done as a friend of Pakistan in the past. Its current leader, Crown Prince Mohammed bin Salman Al-Saud, wants Pakistan to shed ambiguity and stand by the Kingdom against Iran, in addition to providing troops or other material support for the Saudi war effort in Yemen,” Haqqani wrote.

“Saudi Arabia has money and Pakistan has military power with great strategic location. Saudi Arabia is facing pressure from Turkey, Iran, and now it is not in good alignment with Washington after Khashoggi’s episode, and therefore it wants a big country like Pakistan to stand by its side,” Kamran Bokhari, another Washington-based South Asia analyst, said.

While Pakistani officials claim the Saudi aid is based on mutual financial and strategic interests, some lawmakers in the country have voiced concern about what they call the ambiguity of the terms and conditions.

“Would Pakistan have to participate in the Saudi war in Yemen? Or have to side with Saudis on their Sunni-Shiite rivalry with Iran?” said Farhat Ullah Babar, a senior lawmaker from Pakistan’s opposition Pakistan People’s Party.

Foreign Minister Shah Mehmood Qureshi, however, told Pakistan’s Senate on Wednesday that Saudi Arabia had not asked Pakistan to participate in the Yemen war in exchange for financial assistance.

Meanwhile, Iran has complained that anti-Iranian militants use Pakistani territory to plot cross-border attacks inside Iran, but the country has cautiously welcomed Saudi aid to Pakistan.

Sahar Khan, a South Asian research fellow at the Washington-based Cato Institute, believes Tehran seems to give Islamabad the benefit of the doubt.

Sahar Khan was referring to Prime Minister Khan’s televised address in September, in which he announced that Pakistan would play the role of mediator in the Yemen conflict.

“Imran Khan’s offer to be a mediator in Yemen after accepting $6 billion of Saudi money seems a bit odd and not very well thought out. After all, how can Pakistan be a mediator when one party has given it money?” Khan of Cato said.