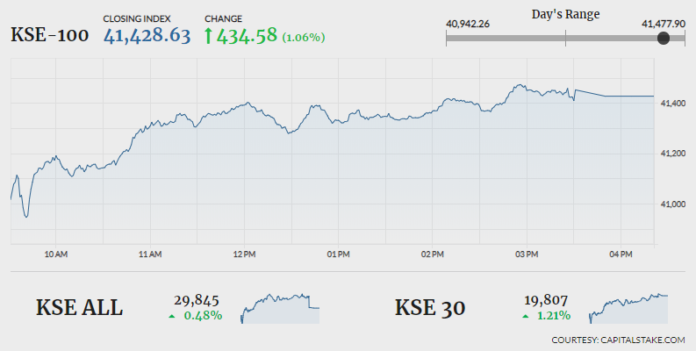 KARACHI: It was a happy day for investors at the Pakistan Stock Exchange where bulls finally gave up on sleep and came back strong, as indices continued to move uphill right from the word go on Thursday.

On the other hand, foreign investors, after MSCI review, adjusted their positions with a net outflow of $8.52 million on Wednesday.

On the economic front, Foreign Direct Investment declined by 55 per cent to $161.20 million in October 2018 as compared to $354.60 million in the same period last year, according to the data released by the State Bank of Pakistan.

Meanwhile, Pakistan Bureau of Statistics (PBS) revised the inflation rate for October. The inflation rate has been slightly cut down from 7 per cent to 6.8 per cent after the Ministry of Finance and experts raised an objection on the methodology of calculating price changes as reported by the media.

The top gainers included the close–end mutual fund sector (+3.85 per cent), chemical sector (+2.60 per cent), cable and textile weaving sector (+2.03 per cent), while the tobacco sector (-2.19pc), woollen sector (-1.89pc) and jute sector (-1.70pc) were the major losers. The power generation and distribution sector (-0.03pc) also ended slightly negative after the announcement of a rise in power tariff by Rs0.41 per unit.

As per notification sent to the exchange, Ghandhara Nissan Limited (GHNL +5.00pc) has launched a full range of trucks in partnership with Renault. The company will be responsible for import, distribution and aftersale service of the three new ranges in addition to CKD assembly at its manufacturing site.