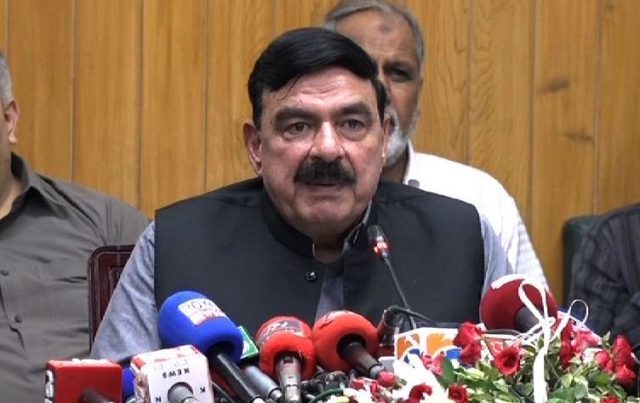 PESHAWAR: Railways Minister Sheikh Rasheed Ahmad claimed on Saturday that his ministry has been able to launch 10 new passenger trains during the first 100 days of governance, adding that by March next year, the number of freight trains would be increased from 8 to 12.

Addressing a press conference at Peshawar Cantt Railways Station premises, he announced that a new passenger train service for the economy class under the name of ‘Rehman Baba’ would run from Peshawar to Karachi on December 25.

He said the challenge to implement the government’s 100-day agenda was taken in a letter and spirit, adding that nine out of 10 passenger train services have been launched while the number of freight trains would be increased to 12, as three more would be launched in the current fiscal year.

He said fresh appointments in the department would be made on merit while there would be no room for influential people. He said that the vigilance department was abolished and 600 employees were sent back to their parent departments.

Sheikh Rasheed said that encroachments along the railway lines would be removed but it was almost impossible to remove 5,000 houses in Karachi.

“I don’t want to make anyone homeless as 5,000 houses were constructed on railways land in Karachi. It was unfortunate that not only politicians but a huge portion of the society was involved in corrupt practices and encroached upon state properties,” he lamented.

The minister said that the culture of commission had inflicted huge losses on railways, as officials, instead of repairing the engines and other machinery at its facilities, got the same done at private workshops.

He said that 69 locomotives acquired in 2002 had been out of order for the last 12 years and no one bothered to get the engine repaired and instead purchased new for commissions.

“We have taken an initiative under which five out of the 69 engines would be repaired inside the Risalpur Locomotive Factory,” he added.

He said that five locomotives had been sent to Risalpur carriage factory for repairing work and more would be repaired at indigenous level. He said the engines got discarded due to the corruption of employees.

The minister said that a new double track of ML-1 from Karachi to Peshawar would be laid and financed.

“With the laying of new track, the speed of trains would increase to 160km from the current level of 100-120km, adding the track would be strong enough to support the train speed of 260km.

He said that the cost, duration and other details of the new double track would be finalized by December 25. He said that talks for ML-1 were being continued with China and details would be made public later.

“Prime Minister Imran Khan will decide about the mode of investment of ML-1 as Russia and Germany have already expressed their desire to lay down the new tracks. I personally prefer awarding the contract to a Chinese company, but the PM will take the final decision of the matter,” he added.

Rasheed said that his ministry was planning to reduce the 59km curve in the mountains between Gujjar Khan-Jehlum by 19km as part of the ML-1 plan, which would reduce the travel time by an hour.

To a question, he said that the track from Peshawar to Landi Loyal had been damaged in flash flood and could not be made operational.

“The portion of the track and other equipment worth Rs1.8 billion was washed away by the flash flood and the railway lacked funds to revamp the track,” he said.

The minister informed that a survey has been started to lay down a new track from Peshawar to Shalman in Khyber tribal district, instead and other formalities would be decided later on condition to the availability of funds.

Responding to a query, he said that the vehicles parked on Peshawar Dry Port would be removed by December 30. “I have passed directives to the concerned quarters to remove all parked vehicles for the Customs clearance and no further time would be given to them,” he explained.

Earlier, during his visit to Risalpur Locomotives Factory, the federal minister underscored his commitment to run the locomotives through the use of latest technology.

The minister said the foreign entrepreneurs will be given incentives to invest in railways so that its revenue could be increased, adding that the government is also working for the welfare of the workers and has decided to run its hospitals, schools and other facilities on modern lines.

“We are looking forward to the private sector to run the affairs of the schools and hospitals working under the aegis of Pakistan Railways,” he concluded.

ISLAMABAD: The Ministry of National Health Services, Regulation and Coordination has proposed waiving taxes on the import/manufacturing of auto-disable syringes. According to sources, the health ministry...
Read more
- Advertisement -