‘BoDs of all oil and gas companies to be reconstituted’ 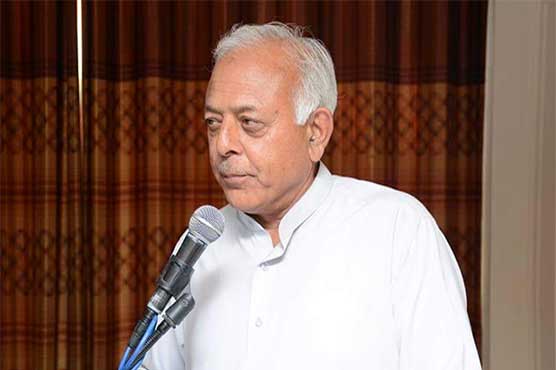 ISLAMABAD: Petroleum and National Resources Minister Ghulam Sarwar Khan has said that the board of directors of all the oil and gas companies would be reconstituted to provide appropriate representation to all the provinces.

Addressing a press conference along with Balochistan Chief Minister Jam Kamal in Quetta on Friday, he said these boards would have equal representation from the public and private sectors so that deserving professionals could get opportunities to serve in the oil and gas exploration and delivery sectors.

He said the government attaches top priority to the progress and prosperity of the people of Balochistan and would provide them all possible representation in the mainstream institutions.

He said he is visiting Balochistan on the directions of Prime Minister Imran Khan and has held constructive talks with the provincial leadership to resolve the provincial issues in a coordinated manner, adding that he has already visited Punjab, Sindh and Khyber Pakhtunkhwa for this very purpose.

The minister said the federal government would work in close liaison with the Balochistan government to resolve all the problems pointed out by the provincial chief minister, addressing their sense of deprivation.

He said working groups and committees have already been set up to finalize and submit their recommendations within a specific timeframe to chalk out a comprehensive policy and to explore natural resources across the country.

“This process of dialogue and interaction would help adopt a cohesive and inclusive national policy to deal with the prevailing challenges effectively,” he mentioned.

Ghulam Sarwar Khan said the groundbreaking for the establishment of a state-of-the-art oil refinery in Gwadar would soon be performed.

“The Saudi crown prince is expected to visit Pakistan next month during which a memorandum of understanding would be signed for the construction of the oil refinery,” he said, adding that the Saudi energy minister would visit Gwadar tomorrow (Saturday) to inspect the land allocated for the proposed refinery.

The minister said China has no concerns over the Saudi investment in Gwadar and the Balochistan government has also been taken on board on the matter.

“We are committed to ensuring uninterrupted supply of gas to the domestic, commercial and export-oriented industry. The government has given subsidy on gas to the tune of Rs125 billion and still the gas tariff is lower in Pakistan as compared to the regional countries,” he added.

To a question, the petroleum minister said Rs14 billion are being spent for the provision of LPG mix to the towns and cities of Balochistan. He said land has already been acquired for the establishment of about 26 plants for this purpose.

Earlier, the Chief Minister Balochistan Jam Kamal enumerated the key issues facing the province in different sectors and urged the federal government to provide the requisite support to the provincial government in resolving these problems.