‘US not looking to grant further Iran oil sales waivers’ 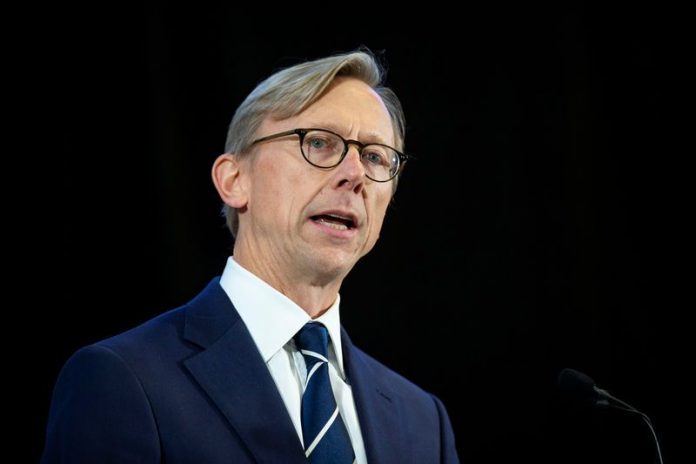 ABU DHABI: The United States is not looking to grant more waivers for Iranian oil imports after the reimposition of US sanctions, the US special representative for Iran said on Saturday, underlining Washington’s push to choke off Tehran’s income.

“We are not looking to grant any waivers or exemptions to the import of Iranian crude,” Brian Hook told an industry conference in the United Arab Emirates capital Abu Dhabi.

Hook declined to say what the administration in Washington would do when those waivers end in May.

“Iran is now increasingly feeling the economic isolation that our sanctions are imposing … We do want to deny the regime revenues,” Hook said. “Eighty percent of Iran’s revenues come from oil exports and this is (the) number one state sponsor of terrorism … We want to deny this regime the money it needs.”

Tensions between Iran and the United States have increased since May, when US President Donald Trump abandoned a 2015 nuclear deal between Tehran and major powers, saying the accord was flawed in Tehran’s favour, and reintroduced sanctions on Iran that had been lifted under the pact.

“We want a new and better deal (with Iran) but in that process we are denying the Iranian regime billions and billions of dollars and they are facing a liquidity crisis,” Hook said.

The Islamic Republic, he added, would not return to the negotiating table without pressure.

Tehran has refused to renegotiate its nuclear accord and says its ballistic missile programme – another source of concern for Washington and its regional allies such as Israel and Saudi Arabia – is solely defensive and untouchable.

Hook said Washington was pleased with China cutting its oil imports from Iran, and that he expected much deeper reductions in Iranian oil exports. “We are just getting started,” he said.

Iran’s crude exports will be severely curtailed for a third month in January as it struggles to find new buyers amid the sanctions, according to tanker data and industry sources.

Separately, Omani Oil Minister Mohammed bin Hamad al-Rumhi told the conference that Washington had not asked the Gulf Arab state to stop a gas pipeline project with Iran and that talks were continuing.

He said some partners for the project had pulled out because of the risk of punishment by Washington for dealing with Iran but that some other Asian firms were willing to take part.