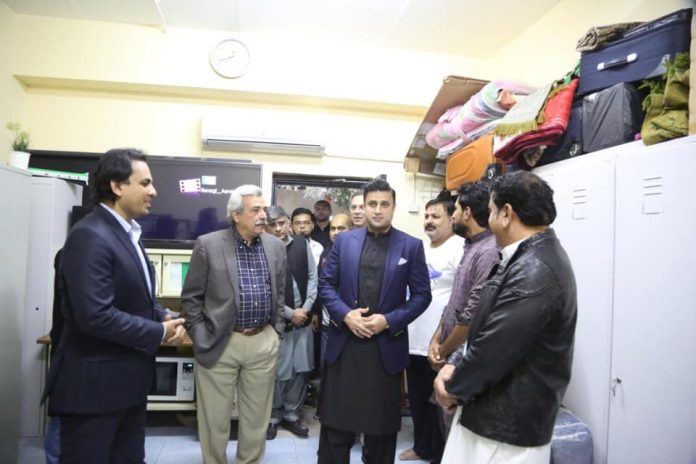 The visit was first of its kind as no minister had ever visited a labour camp to review working conditions of Pakistani workforce there, said a news release received from UAE.

Bukhari interacted with the workers and reviewed their accommodation, dining and prayers facilities to get an overall picture of the provisions being offered to the laborers by their employers.

Addressing the workers, he said, “You will soon feel a sense of ownership. The government is standing behind you and you have to stand up for your country and serve it in whatever capacity you can.”

Bukhari emphasised the need to use legal channels for sending money to their country instead of “hundi system”. He said Pakistan needed special attention of the Pakistanis working abroad.

“At this time, sending money through banking channels would be seen as a service to the country,” he stressed.

Zulfikar Bukhari also stated that taking care of the workers was the responsibility of the overseas ministry, assuring that the government vowed not to isolate its workforce working far away from their homes.

He said the aim of his visit was to understand the problems faced by Pakistanis working in Gulf countries.

On the occasion, National Bank of Pakistan (NBP) organised a musical programme to entertain the Pakistani expats. The NBP officials also arranged an awareness campaign on sending money through legal channels.