US-China trade talks to resume in Washington next week 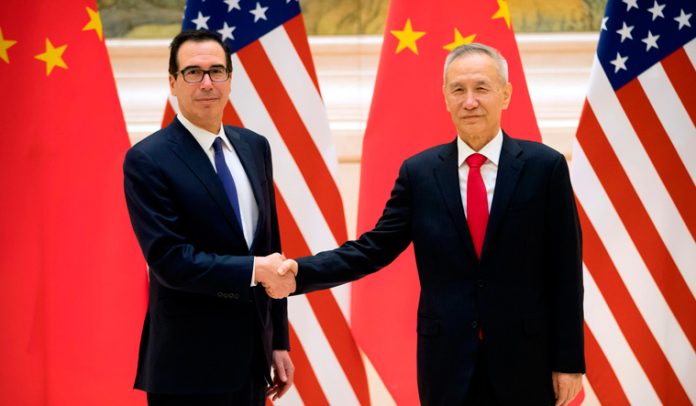 BEIJING: Talks between China and the United States to resolve their bruising trade war will resume next week in Washington, with both sides saying this week’s negotiations in Beijing made progress.

The White House stood by its March 1 deadline for reaching a deal or raising tariffs on certain Chinese goods, despite US President Donald Trump having said he was reluctantly willing to let the target date slide.

White House Press Secretary Sarah Sanders said in a statement on Friday the two economic superpowers “will continue working on all outstanding issues in advance of the March 1, 2019, deadline.”

“These detailed and intensive discussions led to progress between the two parties. Much work remains, however,” Sanders said about the Beijing round of talks.

China and the United States reached a consensus in principle on some key issues during the talks, China’s state news agency Xinhua said on Friday, adding they had a detailed discussion on a memorandum of understanding on trade and economic issues. It gave no details.

Chinese President Xi Jinping met US Trade Representative Robert Lighthizer and US Treasury Secretary Steven Mnuchin on Friday after a week of talks at senior and deputy levels, and called for a deal both sides could accept, Chinese state media said.

US duties on $200 billion in imports from China are set to rise to 25pc from 10pc if no deal is reached by March 1 to address US demands that China curb forced technology transfers and better enforce intellectual property rights.

After talks on Thursday, Mnuchin said on Twitter that he and Lighthizer had held “productive meetings” with Xi’s top economic adviser, Vice Premier Liu He.

“Next week, both sides will meet again in Washington. I hope you will continue efforts to advance reaching a mutually beneficial, win-win agreement,” Xi said at Beijing’s Great Hall of the People.

He added that China was willing to take a “cooperative approach” to settling bilateral trade frictions.

“We feel that we have made headway on very, very important, and very difficult issues. We have additional work to do but we are hopeful,” Lighthizer said, according to a foreign media pool video.

Pakistan’s exports of information technology grew by 47.4 per cent to cross the $2 billion mark for the first time in the country’s history...
Read more
- Advertisement -

July 27, 2021
The State Bank of Pakistan has decided to maintain the policy rate at 7 per cent for the next two months, the central bank's...