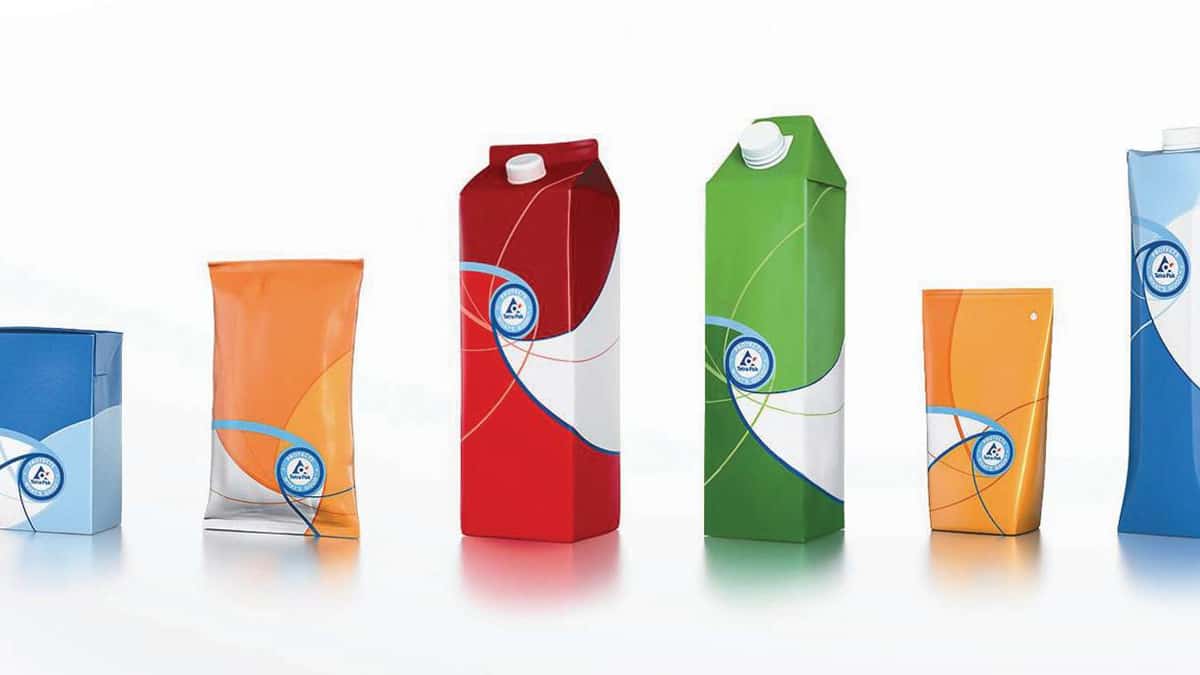 As recently as the early 1970s, Pakistan had just one dairy plant that was owned by a company called Milko Limited, and packaged milk was virtually unknown to the domestic market. Then, the plant was acquired by Turnkey Dairies of Denmark, Tetra Pak of Sweden, and Packages Limited of Pakistan, who brought with them low cost paper-based packaging that had a shelf life of 15 days. This was no less than a revolution for the domestic dairy market.

Tetra Pak Pakistan officially came into existence in 1984, at that time supplying packaging solutions to customers like Milk Pak (Nestle), Haleeb, and Bambino. But the 80s were a period of struggle for the company as consumers were still warming up to the concept of packaged milk. Over the years, however, the market for packaged milk has grown as consumers become more aware and advanced machinery is introduced. By the year 2000, the market for packaged milk was well established and the growth has sustained since then. Today, Tetra Pak Pakistan’s customers include most of the big dairy and juice producers including Nestle Pakistan, Engro, Shakarganj, Haleeb, and Shezan.

In 2011, Tetra Pak moved its operations to a larger factory in Lahore’s Sundar Industrial Estate, with an investment of €92 million, which today is the only plant in the country to have won an award from the Japan Institute of Plant Maintenance (JIPM) for manufacturing excellence. How has the company been able to achieve this? Let’s take a look.

According to Jorge Montero, Tetra Pak Pakistan’s Managing Director, Tetra Pak is the only non-Japanese company to reach JIPM’s second level, which is short of just the final world class level.

“Tetra Pak’s Lahore factory is in the top three on most critical performance measures that we have,” Montero says in an interview with Profit. “The utilisation in the Lahore factory has improved to such an extent that it has resulted in Tetra Pak not having to build an additional three to four factories around the world. In terms of efficiency, capacity utilisation, waste, and accident prevention, as well as a host of other performance indicators, the factory in Lahore is leading.”

He says the transition process from the smaller to larger factory was made smoother through implementing Japanese standards. “The whole methodology relies on improving worker know-how and autonomy. The idea is to delegate as much decision-making and know-how to the lowest levels in the organisation and creating a very open-door approach to things,” he explained. “Everybody has a say in whether a certain thing works or not. Usually the person who puts the idea forward leads the entire or at least part of the project. Changes then happen every day and continuous improvement takes place.”

Interestingly, this Japanese methodology appears to have taken a far quicker route in Tetra Pak’s locations in developing countries compared to developed countries where generally there’s higher resistance. “Our factory in Pakistan is way ahead of the factories in Europe. In developing countries, people took this [approach] more positively. They took this change as a challenge and as an opportunity to learn and qualify themselves. We have much more resistance in Europe and America,” says Montero.

This openness, coupled with Tetra Pak’s stable history in Pakistan, encouraged the company to further expand its operations in Pakistan “We already had a strong base and the potential (in the Pakistani market) is quite large in terms of population and the size of the milk market. So, Pakistan was seen as a place where Tetra Pak had a huge potential to grow,” said Montero. “Tetra Pak already had a successful operation in Pakistan. However, we were constrained in terms of space and expansion possibilities. The old plant was already 30 years old (by 2011) so we decided to build a new plant altogether.”

The company is now ready to apply to be recognized for JIPM’s highest standard. “We will apply for the world-class level this year and hopefully we will achieve it. We have been given the green light to apply for the award,” Sonya Kayani, regional communications director for Pakistan, Arabia Area, Egypt, East Africa and South Africa at Tetra Pak, told Profit.

While Tetra Pak has expanded significantly in Pakistan, Montero said that several challenges on the exports front have meant that they are now building a factory in Vietnam. “Exports have been adversely affected due to government policies, levied between 2015 and 17, that introduced high levels of duties on raw material imports among other taxes and duties. About a third of Tetra Pak Pakistan’s production is exported around the world, which has recently been on the decline. One of our biggest export markets is South East Asia, where Tetra Pak’s exports to Vietnam have reduced by 40 percent. They are expected to cease altogether by 2020,” he said. “We are currently building a factory in Vietnam, hence Tetra Pak Pakistan will lose its export to that country. Had conditions been different, we would have expanded in Pakistan instead of building a factory in Vietnam.”

Despite gains made by Tetra Pak and other dairy companies, loose milk continues to be the major player in the domestic dairy market. According to an estimate, packaged milk constitutes only eight% of the total domestic milk market while the remaining 92% is captured by loose milk.

“Pakistan is very unique in the sense that whole milk (with full fat) is preferred here. It is one of the few countries where there is such a singular focus on the fat content. Most health authorities around the world prefer a lower fat content, prefer half cream or no-cream milk, and also focus on the vitamin and protein content,” Montero said.

According to him, consuming loose milk is inherent unhealthy because cows have certain bacteria that the human body cannot process and these bacteria stays in the milk unless it is pasteurized. Secondly, he claimed, fresh loose milk has a lifespan of just two hours in climates like Pakistan’s so it is almost impossible for loose milk to be transported to the consumer within that time frame while remaining fresh. “How can they manage to transport loose milk in two hours from the farm, which is in most cases outside the city, to your home? The only way to keep it good for two hours is by adding ingredients to keep the milk cool. In best cases, that would be ice cubes, which begs the question: what kind of water is being used for these ice cubes? Punjab Food Authority (PFA) recently rejected half of the loose milk samples that it tested,” Montero said.

Kayani adds: “In rural areas, people traditionally drink milk straight from the cow This is one of the leading causes of tuberculosis and perhaps one of the reasons why Pakistan is among seven countries in the world where tuberculosis has still not been eradicated.” The data bares it out: World Health Organisation says Pakistan has an estimated 510,000 new tuberculosis cases emerging each year and approximately 15,000 people develop drug resistant TB every year.

In making the case for packaged milk, Moreno says that the supply chain for loose milk is untraceable as there is no branding or labels on the product. “You just have to trust the person who delivers it to you, but the person who delivers is not the one who collected it which means you have to trust the whole chain of people who are involved. You are looking at a system with no quality controls.”

On the other hand, Kayani said, packaged milk is fully traceable and consumers know who the producer is. “In the case of loose milk, even though you get to know that the food authority disposed a certain amount of milk, the source of production and adulteration remain vague.”

Even in the case of milk regulation, standards are a challenge in Pakistan. In December 2016, three independent bodies – the Pakistan Council of Scientific and Industrial Research (PCSIR), University of Veterinary and Animal Sciences, and University of Agriculture Faisalabad – were asked to test samples of packaged and loose milk. All three came up with different test results, raising questions about the capability of these bodies to test samples and the authenticity of these results.

The Supreme Court then asked the PFA to test these samples, which declared most of the major milk brands safe for consumption. They were also declared safe for consumption in 2017, but in June 2018, the PFA released a report saying that three milk brands were unable to fulfill the food regulatory bodies requirements. “Over the years, the PFA has built up its standards and made them more stringent. Now, we have different food authorities in different provinces and the standards in all the provinces vary. So, for example, there can be a variance in fat content depending on where the milk is coming from, but that does not make it unfit for human consumption,” Kayani explained.

But while the PFA is able to regulate packaged milk, it is unable to regulate the loose milk market. “It’s a daunting challenge. If you take Lahore as a market, you will probably need half a million cows to fulfill the demand for milk,” said Montero. The problem, however, is that most farms are very small, sometimes even consisting of only two or three cows. If Montero’s figures are to be believed, at that scale it would take approximately 100,000 farms to supply milk to Lahore alone. “If you only look at the origin (dairy farms), and ignore the distribution, it is still a huge task. It becomes even more complicated when you add in distribution. PFA can occasionally catch loose milk samples at entry points of cities. But can that guarantee the quality of the product?”

What’s next for the Pakistani market?

The market for packaged milk is growing in Pakistan but the domestic market still lags behind other markets in terms of product offerings. “The variety of the products that are available all over the world and the kind of products our technology can provide are much larger compared to what is being offered in Pakistan. Our aim for the future is to try and widen that offering for the customer and bring in new products,” Kayani said.

Given Pakistan’s energy situation, Montero adds, UHT-packaged milk is more convenient compared to loose milk because it does not need to be refrigerated so retailers can use their refrigerator space for other comparatively value added products.

The Pakistani milk market also lacks diversification with almost 98% of the milk being sold is whole fat milk. “For the most part, packaged milk sold in the country is full cream milk. There are very few variations. For example, there are very few people who consume skimmed milk.” 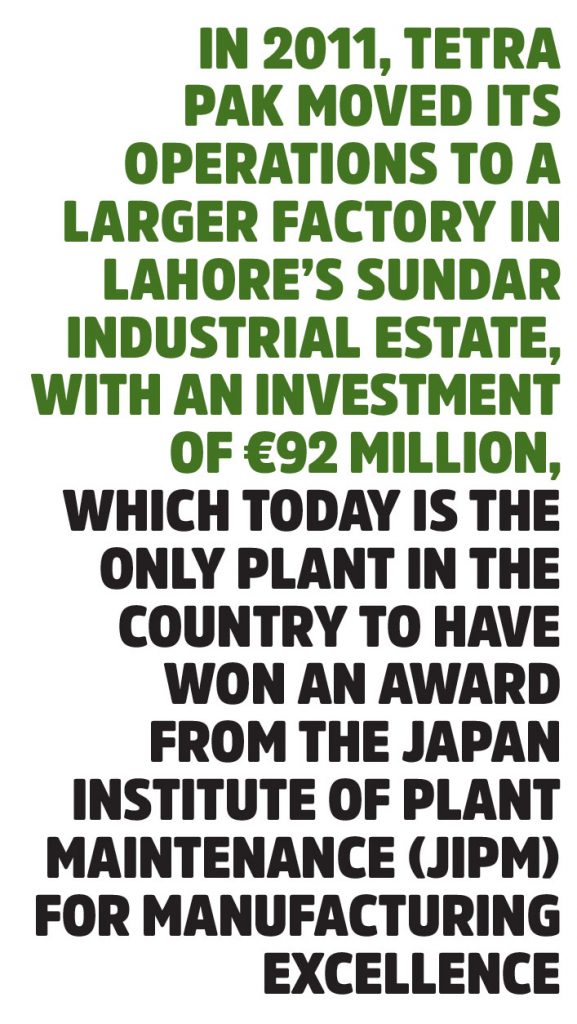 One product that could be ideal for the Pakistani market is lactose-free milk. According to Tetra Pak’s research, 20 to 30% of the population is lactose-intolerant and other research estimates from 2017 put the prevalence of primary adult lactose malabsorption in Pakistan at 60%. “Most people don’t know that they are lactose-intolerant. They know that milk does not suit them, but they don’t know what the underlying reason is. For most people, the diagnosis stays undetected,” says Kayani.

In the US and European markets, non-dairy milk like soya or almond milk has gained popularity with people opting for vegetable-based milk which they consider healthier and less fattening. In the US alone, the market for other milk alternatives is around $1.98 billion. “I don’t see that happening in Pakistan, but the market for lactose-free milk has growth potential,” says Montero.

The company also plans to develop the market for yogurt or smoothie-based drinks, which are popular in Europe and Southeast Asia but have failed to penetrate the Pakistani market. “In Pakistan, there are more traditional yogurt-based drinks like lassi. But the problem with them is that generally everyone has their own taste palette so they are kind of hard to standardise,” says Kayani.