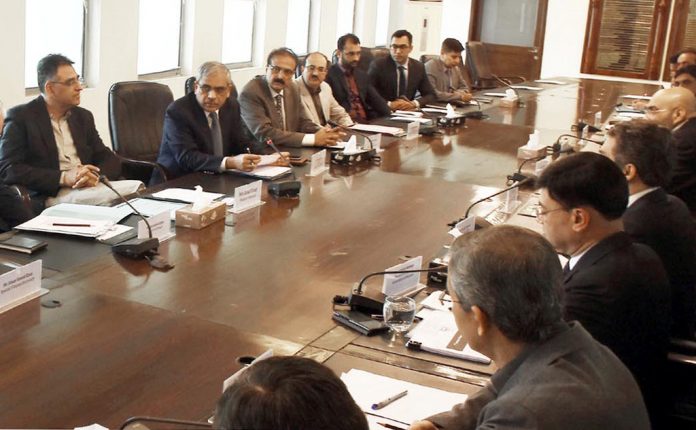 ISLAMABAD: The government has set a target of creating at least three million new jobs and additional exports of $5.5 billion by 2023.

National Financial Inclusion Strategy (NFIS), according to the Ministry of Finance, will enhance the usage of digital payments to 65 million active digital transaction accounts, increase deposit-to-GDP ratio to 55pc, promote financing to 700,000 small and medium enterprises, increase agricultural finance disbursements to Rs.1.8 trillion, serve six million farmers through digitalised solutions and enhance the share of Islamic banking to 25pc in the banking industry.

Chairing a meeting of the NFIS Council on Tuesday, Finance Minister Asad Umar said that his government was fully committed to improving the livelihoods of Pakistanis through job creation, promotion of entrepreneurship and enhancement in the access to formal financial services.

During the 6th meeting of NFIS Council, Asad Umar said that the government prioritized NFIS as part of its agenda to achieve inclusive economic growth through digitalization of government payments, enhanced access to finance and deposit base, promotion of SMEs, easy and affordable access to finance to farmers, facilitation in low-cost housing finance and provision of Shariah-compliant banking solutions.

“NFIS targets have been set for these areas for the next five years. The implementation will help create at least three million new jobs and an additional export of $5.5 billion by 2023,” he stated.

Welcoming the finance minister to the meeting, State Bank of Pakistan Governor Tariq Bajwa said that under Asad Umar’s credible leadership and guidance, NFIS would achieve its objectives of inclusive economic growth, economic stability and financial empowerment to unserved segments of the population. He also gave a detailed background of the achievements made so far under NFIS.

The council held an overview of the progress of key strategic initiatives approved under NFIS 2023. Further, the council also approved the revised NFIS governance structure to ensure smooth implementation of the strategy. This includes the transformation of NFIS Council into NFIS Policy & Implementation Council which will be chaired by the finance minister and co-chaired by the SBP governor.

The lead implementation agencies, including federal and provincial ministries, government departments, regulators and private sector, would be fully empowered and responsible to implement actions in coordination with concerned stakeholders as per the timelines and KPIs mentioned in NFIS 2023, while SBP will continue serving as the NFIS Secretariat.

The finance minister informed the meeting that an NFIS Transformation Office would be created to facilitate the digitalization of government payments and receipts and act as a troubleshooter to resolve issues of implementing agencies.

The meeting was attended by NFIS council members, including secretaries of Finance Ministry and Economic Affairs Division, chairmen of Securities and Exchange Commission of Pakistan, Federal Board of Revenue and National Database & Registration Authority, and representatives of provincial finance departments.