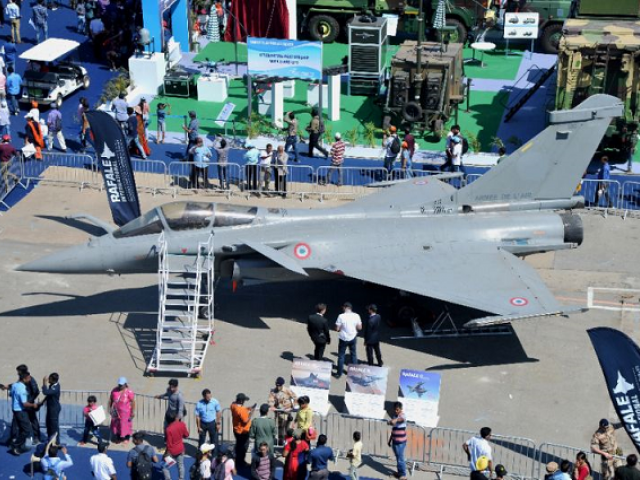 New Delhi agreed in 2016 to purchase 36 Rafale jets from France but the deal has been embroiled in misconduct allegations, which resurfaced in the wake of air battles last month with Pakistan that raised questions about the capacity of the Indian Air Force.

India and Pakistan both struck each other’s territory during the skirmishes. Islamabad said it had shot down two Indian fighters, and New Delhi — while confirming the loss of one of its planes — claimed it had “shot down” a Pakistani jet.

Modi said this week that the result of the brief aerial clash with Pakistan would have been “better” if India had Rafales while accusing the opposition of hampering the deal he signed with Paris at an estimated cost of $9.4 billion.

During a Supreme Court hearing late Wednesday, The Hindu newspaper — which ran a series of reports on the deal — was warned it faces charges under the Official Secrets Act over defence ministry documents it cited in its coverage.

Attorney General KK Venugopal said the files — which indicated the defence ministry was angry because Modi’s office had carried out rival negotiations for the Rafales — had been “stolen”.

“The government claims that the documents were stolen. Doesn’t that mean the documents are authentic?” said Rahul Gandhi, head of the opposition Congress party which has led a longstanding onslaught against the deal.

He added, “The PM’s name clearly figures in the documents, saying the prime minister’s office is carrying out parallel negotiations. Let’s have an inquiry into that as well.”

‘No force on earth’

French company Dassault initially won a contract negotiated under a Congress-led government in 2012 to supply 126 jets to India, with 18 built in France and the rest in India by state-owned Hindustan Aeronautics Limited (HAL).

But during a visit to France in 2015, Modi scrapped the deal, replacing it with an order for 36 jets — all to be built in France.

The new agreement, formally signed in 2016, named Reliance group, a conglomerate owned by billionaire Anil Ambani, as Dassault’s local partner. Ambani is reported to be close to the governing party and Reliance had little experience in the aviation sector.

The government has strongly denied any misconduct in its renegotiation of the deal and accuses Congress of undermining national security to win votes.

The Hindu published details which indicated the price of the jets had risen because normal procedures were bypassed.

India’s attorney-general said an investigation is under way into the newspaper, which has stated it will not reveal where its information came from.

The Hindu group chairman N Ram said, “We did not steal the documents from the ministry of defence, we got them from confidential sources and no force on earth can make me or us reveal the source.”

The Supreme Court is hearing a series of petitions seeking a review of a previous ruling that declined a demand for investigation into the deal. The next hearing is on March 14.

SWAT: Swat Deputy Commissioner Junaid Khan said on Thursday that an amount of Rs5 billion has been allocated for the construction of a road...
Read more
ENERGY

APTMA suggests grid ceiling to be enhanced from 5MW to 6.5MW for B3 industrial consumers
Read more
HEADLINES

The Oil and Gas Regulatory Authority (OGRA) has lifted a 12 year long ban on the issuance of new licences for the new compressed...
Read more
World Business News

SHANGHAI: Asian stocks scaled to record highs on Thursday as investors were hopeful the incoming Biden administration will be able to secure passage of...
Read more
- Advertisment -

January 21, 2021
The Oil and Gas Regulatory Authority (OGRA) has lifted a 12 year long ban on the issuance of new licences for the new compressed...