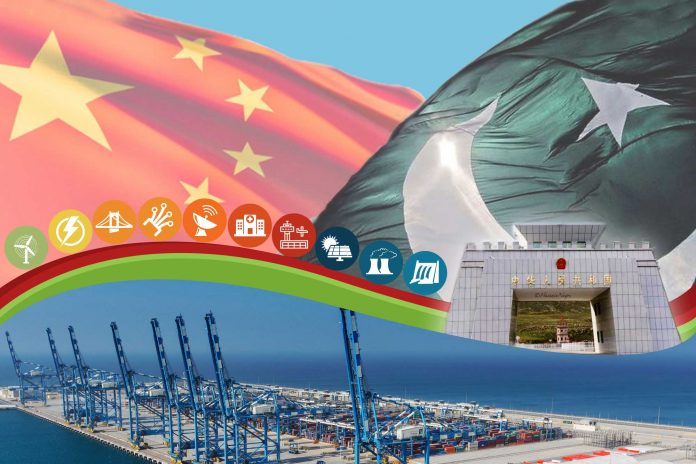 ISLAMABAD: Since the previous government remained under fire for not sharing the details of China Pakistan Economic Corridor (CPEC), the incumbent government has decided to involve the business community in the next phases of CPEC.

The Cabinet Committee on CPEC, which met in the federal capital on Wednesday, has formed the first CPEC Business Forum to take the business community on board for future projects of the corridor.

Briefing the media after the meeting, Planning and Development Minister Makhdoom Khusro Bakhtiar said that liaison between the government institutions and business community was missing since the inception of CPEC. “The newly established forum, comprising leading businessmen from different sectors, would work as a bridge between the government and private sector,” he added.

The minister said that the CPEC committee has decided to perform groundbreaking of an important phase of the corridor’s western route later this month.

“This step would mitigate the sense of deprivation of the people living along the western corridor,” he said, adding that 60pc work on Hakla-Dera Ismail Khan section of the corridor has already been completed.

He said the government is focusing on connecting the missing links in the eastern corridor and in this regard, work on Sukkur-Hyderabad section would commence in the next six to eight months.

The minister said that no headways were achieved in the industrial sector over the last five years; however, the present government has prioritized this field by ensuring speedy implementation wherein concession agreement of Special Economic Zone at Rashakai, Khyber Pakhtunkhwa, would be signed by the 25th of this month, while groundbreaking would be performed in April.

The minister clarified that none of the funds allocated for CPEC projects were diverted to any other purpose; rather allocation for other initiatives in the Public Sector Development Programme (PSDP) was re-appropriated for Sustainable Development Goals.

“Projects worth $28 billion are presently being implemented with the cooperation of China,” he stated, adding that the committee specially specified six sectors for development under CPEC, including agriculture, education, health, poverty alleviation, water supply and sanitation.

The minister said the Chinese government has decided to release $1 billion for these projects in the next three years while half of the amount would be spent during the first year.

He said the committee discussed Pakistan Railways’ ML-1 in detail. “An implementation committee, headed by Railways Minister Sheikh Rasheed, has been constituted to identify financial savings, phasing of the project, its scope etc. within two weeks in order to fast-track the project. A final decision would be made in the light of the committee recommendations,” he added.

He further informed that agriculture is a priority area under CPEC and a team of Chinese experts would soon visit Pakistan to identify areas for the development of food processing so as to boost agricultural exports.

He said the cabinet committee also decided to perform groundbreaking of Gwadar International Airport this month.