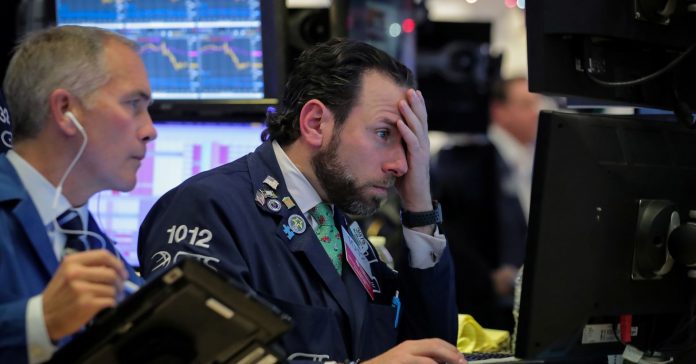 Worries about economic growth prospects hit global stock markets during the past week, causing sharp price drops on both sides of the Atlantic.

In bloodletting on Wall Street, US stocks suffered their worst since early January.

The closely watched “yield curve” flashed a warning sign that a recession could be looming while monthly US, French and German manufacturing indices all fell — rattling investors who were already uneasy after this week’s surprisingly weak outlook from the Federal Reserve.

“A series of worse-than-expected economic releases from Europe have sounded the alarm bell not just for the bloc, but also the global economy, by providing further evidence of a worldwide slowdown in economic activity,” said XTB analyst David Cheetham.

The so-called yield curve, which tracks the spread between short- and longer-term rates on US Treasury bonds, briefly inverted on Friday, with yields on three month bonds falling below those for 10-year notes — the first time this had happened since before the global financial crisis in 2007.

The yield curve is closely watched since it has inverted prior to recessions in recent decades.

But Justin Lederer, interest rates strategist at Cantor Fitzgerald, said the flip was not cause for so much alarm.

“The yield curve inversion reveals more what is going on in the global landscape, the fact that global growth is slowing down,” he said. “I don’t think it is an immediate signal that a recession is approaching.”

Also weighing on the benchmark Dow Jones Industrial Average were poor showings for Boeing and Nike, which fell 2.8pc and 6.6pc.

An Indonesian air carrier on Friday became the first to announce it was canceling a multi-billion-dollar order of 737 MAX aircraft in the wake of recent fatal crashes in which nearly 350 people perished.

Signs of a weak first quarter for the eurozone also mounted as a closely-watched survey pointed to March output being dragged further down by manufacturing weakness, especially in Germany, Europe’s largest economy.

The German data were “shockingly bad”, said Angel Talavera, an economist with Oxford Economics, and “a timely reminder that the European industrial sector continues to be dominated by worries and potential negative shocks, including the outcome of the Brexit negotiations, trade concerns and problems in the auto industry.”

The pound however pushed higher one day after European Union leaders agreed at a crucial summit to delay Brexit following a request from Prime Minister Theresa May.

If the premier fails next week to push her divorce agreement through a fractious parliament that has already rejected the deal twice, Brexit will take place on April 12, unless London agrees to take part in European elections.

If May manages to get the deal passed, the exit date will be pushed back until May 22.

Britain had been due to crash out of the bloc next Friday.

The world’s main oil contracts also fell sharply, as a softer economy would likely lead to less demand for the fossil fuel.