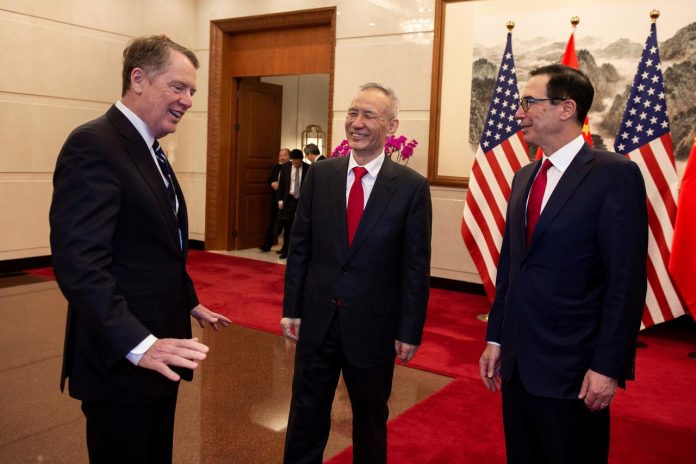 BEIJING: US officials held “constructive” talks in Beijing, Treasury Secretary Steven Mnuchin said on Friday, concluding the latest round of dialogue with China aimed at resolving a bitter trade dispute between the world’s two largest economies.

Since President Donald Trump delayed a scheduled March 2 hike in tariffs on $200 billion worth of Chinese goods, Mnuchin and US Trade Representative Robert Lighthizer were in the Chinese capital for the first face-to-face meetings between the two sides, citing progress in negotiations.

“@USTradeRep and I concluded constructive trade talks in Beijing,” Mnuchin said on social media network Twitter. “I look forward to welcoming China’s Vice Premier Liu He to continue these important discussions in Washington next week,” he added without giving any details. US officials had a “very productive working dinner” on Thursday, he told reporters.

Trump imposed tariffs on $250 billion of Chinese imports last year in a move to force China to change the way it does business with the rest of the world and to pry open more of its economy to the US companies. Though his blunt-force use of tariffs has angered many, his push to change what are widely viewed as China’s market-distorting trade and subsidy practices has drawn broad support.

Lobbyists, company executives and the US lawmakers from both parties have urged Trump to not settle simply for Beijing’s offers to make big-ticket purchases from the United States to help reduce a record trade gap.

Mnuchin and Lighthizer greeted a waiting Liu at the Diaoyutai State Guest House just before 9am (0100 GMT), and in two brief appearances before journalists, the three mingled and joked with members of the opposite teams. Trade watchers had anticipated the scope of this round of talks, which wrapped up about 24 hours after the US delegation had arrived.

Reuters reported previously that the two sides were negotiating written pacts in six areas – forced technology transfer and cyber theft, intellectual property rights, services, currency, agriculture and non-tariff barriers to trade. It was unclear how much progress was made on the phrasing of those agreements, but earlier in the week a US administration official told Reuters that Lighthizer and Mnuchin were “literally sitting there going through the texts”, a task typically delegated to much lower levels.

One person with knowledge of the talks said “translation is definitely an issue”, referring to discrepancies between the Chinese and English-language versions.